Never too old to try something new! 100-year-old Bosnian woman who survived WW2 and Yugoslav wars opens art exhibition after learning how to paint at the age of 87

A woman staged her own art exhibition to celebrate her 100th birthday, having only started painting when she was 87.

Nada Rudan survived WW2 and the Bosnian war and worked as a dressmaker until she finally retired aged 85.

However after she gave up her job she found she still needed a creative outlet to fill the time – so she decided to teach herself how to paint.

More than a decade later, the Bosnian native says she is most relaxed when painting and now finds the days are often too short to fit in everything she planned to do.

Her daily routine is to paint for three hours in the morning and two hours in the afternoon, when she is at home. 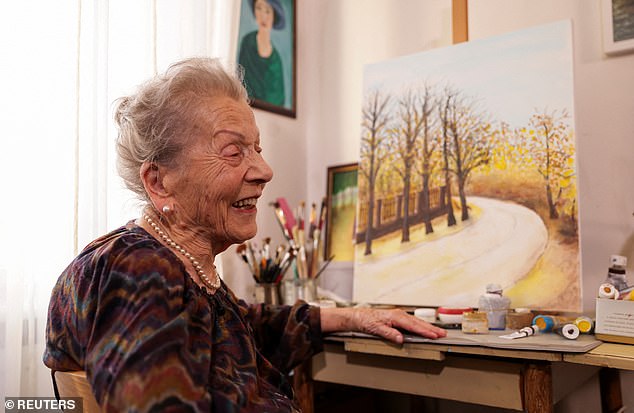 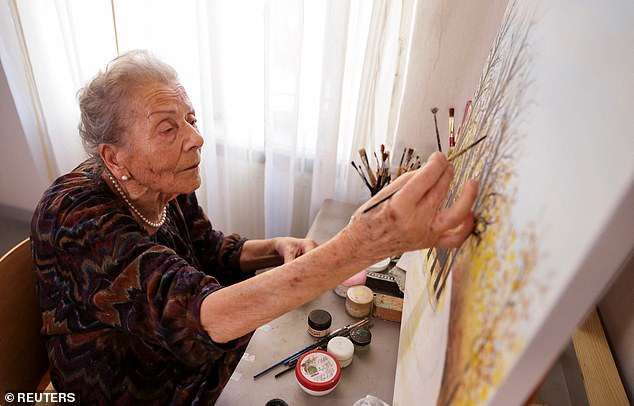 The Bosnian only took up painting at the age of 87, wanting to keep herself occupied in her retirement

Rudan likes to paint nature most of all and uses acrylic colours ‘because they don’t smell’.

She considers herself an ‘amateur’ rather than a ‘true artist’, but is very proud that all her family, friends and neighbours came to her exhibition.

After her exhibition in Sarajevo in late June, the centenarian left for a month’s holiday on the Adriatic coast and then travelled on to Germany where her daughter lives.

‘I am determined not to become a burden to my children,’ the mother of two, grandmother of three and great grand mother of four children told Reuters in her spacious home in central Sarajevo, surrounded by some of her estimated 200 paintings.

‘And I am calm, I don’t want to be nervous, I always think first and then act,’ Rudan said.

‘I am still in a good health, my hands are stable, my eyes serve me well,’ she says, adding that she rarely wears glasses when painting. 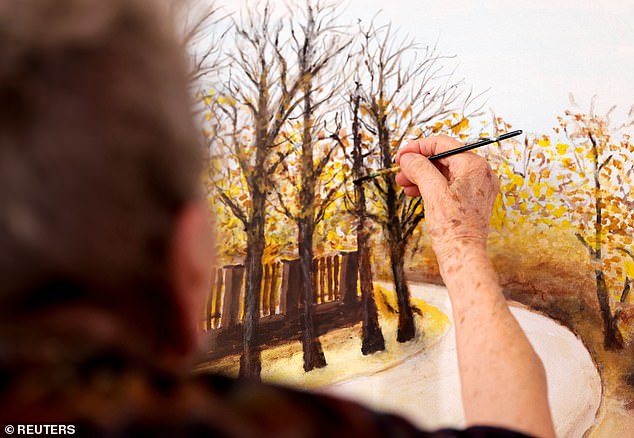 She considers herself an ‘amateur’ rather than a ‘true artist’, but is very proud that all her family, friends and neighbours came to her exhibition

She speaks fondly about frequent travels with her children and grandchildren over the past decades.

After her husband died in 1999, Rudan visited the United States, central America and numerous European countries, and those journeys inspired many of her paintings, such as a volcano in Hawaii or pyramids in Mexico.

She visited Hollywood at the age of 95, and was allowed to enter the theatre where the Academy Awards ceremony takes place. ‘That was such a treat!’

‘You have to be positive in life and hope for the best, there will always be a solution,’ says Rudan, who survived both World War Two and the 1992-1995 siege of Sarajevo by Bosnian Serb forces.