Washington: The Biden administration is bracing for more terror attacks in Kabul after the US President’s top national security advisers told him to expect more bloodshed before the withdrawal of all US troops next week.

The Pentagon revealed there had only been one suicide bombing outside the airport in Kabul on Friday (AEST) rather than two as it had originally stated.

The Afghan death toll from the attack rose to 169, the Associated Press reported, on top of the deaths of 13 US troops in what was the deadliest day for the US military in Afghanistan since 2011. 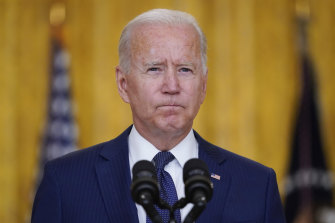 US President Joe Biden’s national security advisers told him another terrorist attack in Kabul is likely in coming days. Credit:AP

A summary of Joe Biden’s meeting with his national security team on Saturday (AEST) said they “advised the President and Vice-President that another terror attack in Kabul is likely, but that they are taking maximum force protection measures at the Kabul airport”.

White House press secretary Jen Psaki told reporters there were “ongoing” and “active” threats to US service members in Afghanistan from the radical terrorist group ISIS-K.

“This is the most dangerous part of the mission,” Psaki said.

“This is the retrograde period of the mission. And what that means is that this is the period of time when the military, commanders on the ground and forces begin to move not just troops home, but also equipment home.”

The US is scheduled to remove all troops out of Afghanistan by next Tuesday. 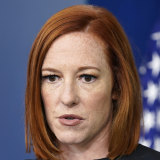 White House press secretary Jen Psaki said the US had now entered the most dangerous phase of the withdrawal from Afghanistan. Credit:AP

Asked what Biden meant when he vowed to “hunt down” those responsible for the attacks and make them pay, Psaki said: “I think he made clear yesterday that he did not want them to live on the earth anymore.”

Psaki said the US does not believe the Taliban colluded with ISIS-K, but added that “clearly there was a break in the security process” at the airport gate.

US military commanders told Biden they were developing plans to target ISIS-K in Afghanistan, according to the summary of Biden’s call with his national security team.

After a meeting with new Israeli Prime Minister Naftali Bennett at the White House, Biden said: “The mission there being performed is dangerous and has now come with significant loss of American personnel, but it’s a worthy mission because they continue to evacuate folks out of that region, out of the airport.”

Even with the carnage at the airport gate, Biden said the US had evacuated another 12,000 people out of the airport in the past 24 hours.

Pentagon spokesman John Kirby said the US believed there were still “specific, credible” threats of attacks near the airport.

“We certainly are prepared and would expect future attempts,” Kirby told reporters.

The Pentagon originally said there had been two separate suicide bombings: one outside the Abbey Gate of the airport and another at the Baron Hotel. It now says there was only one detonation.

“I can confirm for you that we do not believe that there was a second explosion at or near the Baron Hotel, that it was one suicide bomber,” Army Major General William Taylor told reporters.

“We’re not sure how that report was provided incorrectly.”