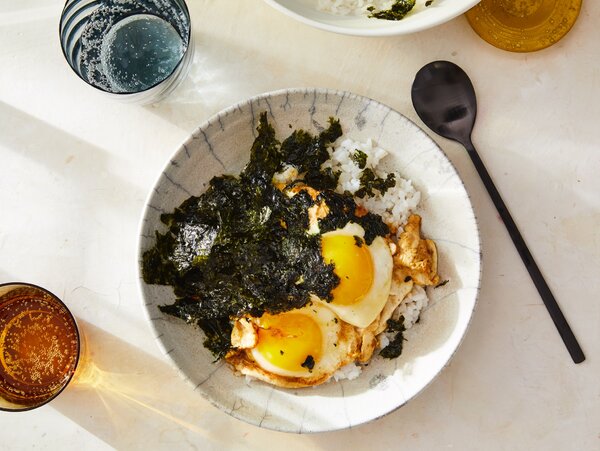 Good morning. Eric Kim has a marvelous, simple recipe in The Times this week for egg rice (above), or egg on rice, a dish found all over the world.

As he wrote in the column that accompanies the recipe: “In South Korea, it’s called gyeran bap, which translates to ‘egg rice,’ featuring soy sauce, sesame oil and often a touch of butter. In Japan, it’s tamago kake gohan (‘egg over rice’), but in that version, the egg is cracked raw into a bowl of fresh, hot white rice, then fluffed with chopsticks into a creamy, comforting wonder. An Indonesian variation, nasi telur ceplok (‘fried egg served over rice’), uses kecap manis, a molasses-​thick sweet soy sauce. Puerto Rican arroz a caballo (‘rice on horseback’) often features corned beef.”

Eric’s recipe is for gyeran bap, but he also notes a version anointed with Maggi, the potent, savory sauce of hydrolyzed wheat protein, and when I read that, it was all I wanted to make: a kind of snack that might be a dinner if you went with two eggs per person, and especially if you fry the eggs in butter so that they pick up some nuttiness as they brown. That’s dinner tonight for me, since I’ve got loads of family out of town and can’t quite face a full Ottolenghi just to serve two. (Though, man, that casserole of his is great.)

Keeping it Kim this weekend, I’d also like to make Eric’s new recipe for cold noodles with tomatoes, a dish that lives near the nexus of gazpacho and naengmyeon: chilled broth seasoned with rice vinegar, soy sauce and sesame oil that’s filled with somen, tomatoes, radishes and scallions. That’s a winner of a meal for a Saturday lunch, especially if it’s hot where you stay.

Smoked chicken wings for dinner that night, since we won’t have much of that once the weather turns? Maybe with some grilled corn (or caramelized corn with mint!), tuna-macaroni salad, a carrot-loaf cake with a tangy lemon glaze?

I’m tempted by those, but also by tradition, whatever the weather delivers: Regina Schrambling’s Dijon and Cognac beef stew has been a balm for me ever since she wrote about it in the tense, nervous, awful days that followed the attacks of Sept. 11, 2001. If this will be the 20th year I’ve made the dish, I’ll still be pleased to have it in the fridge, a promise of solace no matter my mood next week. (It freezes well if you want to get a start on fall provisions.)

And here are four choices for Sunday supper, depending on your situation and desires: a chicken salad with fennel and charred dates; sea scallops with brown butter, capers and lemon; skillet chicken and zucchini with charred scallion salsa; Moroccan chickpeas with chard.

And you can reach out to us for help, should you find yourself in a jam with your cooking or our technology. We’re at: [email protected] Someone will get back to you, if you write. (I may not be able to myself, but I read every letter you send: [email protected])

Now, it’s a long line of 42-inch Viking stoves away from anything to do with kitchens or feeding, but you should read David Marchese’s long interview with Michael Keaton, in The Times.

Finally, here’s Bnny, “Everything,” spare and grieving and a good partner to Schrambling’s stew. Listen to that while you’re cooking and I’ll see you on Sunday.