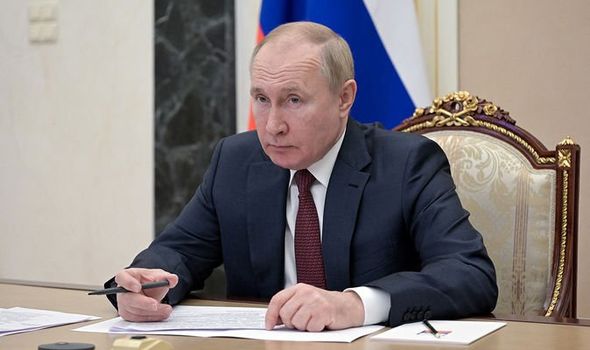 The prediction follows three high-level meetings last week intended to deflate the crisis ‑ but which ended in deadlock. Last night the Defence Secretary warned an invasion into Ukraine would violate the “most basic freedoms and sovereignty”. Issuing a second warning in a week to Moscow, Ben Wallace said there would be “consequences” of any Russian aggression.

The Foreign Secretary also sent out a stern warning to Russia. In a tweet, Liz Truss said: “Russia must halt its aggression, de-escalate and engage in meaningful talks.”

Earlier, Ben Wallace fired a shot across the bows, telling an event in London that Britain would “stand up to bullies”, no matter how far away the conflict.

The stakes have increased following a US warning Moscow may be plotting acts of provocation as a pretext to invasion.

“Russia has pre-positioned a group of operatives to conduct what we call a false flag operation, designed to look like an attack on them or Russian-speaking people in Ukraine as an excuse to go in,” a Pentagon spokesman said on Friday.

He added the operatives were trained in urban warfare and use of explosives to carry out acts of sabotage against pro-Russian rebels.

British cyber experts were scrambled on Friday to help Kyiv after several Ukrainian government departments, including the ministry of foreign affairs ‑ were hit by a massive cyber attack.

Hackers, believed to have been working for Russia, left messages showing the Ukrainian flag crossed out with the ominous warning: “Ukrainians! All information about you has become public. Be afraid and expect worse. It’s your past, present and future.”

Russia is already thought to have struck earlier in the week, when an undersea cable connecting Norway with an Arctic satellite station in Svalbard was cut.

The moves show that Putin, who currently has more than 100,000 troops surrounding Ukraine, is desperate to gain real concessions from the West before the changing weather makes it more difficult for him to advance tanks across the border, said Keir Giles, Russia expert for the Chatham House think-tank.

“The obvious Western strategy is to push it all in the long grass and string negotiations out until it becomes too expensive for Russia to keep its troops on the border and the weather turns against them for invasion,” he said.

“But Russia wants to force the pace. I’d be surprised if we did not receive demonstrations of the kind of damage Russia can do in order to emphasise its point.”

Alarmingly, measures could extend to non-deniable tactics such as missile or air strikes targeting Ukrainian military command and control systems or civilian critical infrastructure which could be “turned on and off at will,” he said.

“These would be punctuated by pauses to repeat or escalate demands in order to pressure Kyiv into concessions and its Western partners into granting Russia’s wishes.” he added.

While he dismissed claims by Moscow that it would place missiles in Cuba ‑ because this would allow Nato to place missiles in countries bordering Russia ‑ a decision to base Russian troops in Belarus is likely, and would have serious consequences.

Not only would this see Ukraine surrounded on three sides, but it would also add to Nato’s fears that Russia will attempt to bridge the Suwalki gap.

The 60-mile strip of land which runs along Poland’s border connects Russia-friendly Belarus with the Russian enclave of Kaliningrad, and would offer an ideal base from which to roll tanks into Nato territory.

Moscow has demanded an assurance Ukraine and Georgia will never join Nato; wants Nato to remove troops and equipment for member states in Eastern Europe and to return deployment to 1997 levels, before Nato expanded.

On Thursday, grim-faced Russian envoys confirmed that separate talks with the OSCE in Vienna, as well as Nato and the US, had ended in deadlock.

Ben Wallace met Nordic partners this week, including Finland ‑ which shares a border with Russia.

The Ministry of Defence said Mr Wallace met with ministers in Sweden, Finland and Norway to discuss Russia’s continued aggression and military build-up on Ukraine’s border.

“The UK and our Nordic partners are united in our approach to upholding European security,” Mr Wallace said.

“My discussions have been directly about deepening bilateral relations, shared security and the consequences of Russian aggression towards Ukraine.

“Our discussions were clear that a Russian invasion of Ukraine would be a strategic mistake, violating the most basic freedoms and sovereignty.”

But it is the West’s willingness to entertain Russia’s demands which, actually, have already empowered Putin, warned Giles.

While Biden no longer believes he can simply “park” the Russian problem to focus on China, mixed messages are causing concern in Europe. These include a stated willingness to find some kind of “accommodation”.

“They say Putin’s forces are too big now not to use. But Putin has already used them to get the US to discuss things which should never have been discussed,” he said.

He added: “What we should be hearing from the West are counter proposals, such as that Russia must stop invading places, and a reminder that it is no longer an Empire. This has all been strangely absent.”

Putin’s perception of US weakness is matched by his own feelings of strength, said Oscar Jonsson, author of “The Russian Understanding of War: Blurring the Lines between War and Peace”.

“Putin has spent the last 14 years, since the invasion of Georgia, steadily building up his forces while the West have done little to alter the military balance of power,” he said.

“He has shown that he can mount simultaneous operations in Ukraine, Syria, Nagorno-Karabakh and Kazakhstan, as well as the deployment of  quasi-state mercenaries of the Wagner Group in Mali.

“With the price of oil at $82 per barrel ‑ twice what Russian budgets are based on ‑ and one of the world’s biggest gold reserves, Putin feels he has shored Russia up against the prospect of more sanctions.

“He feels he has a strong hand to play, and the West is doing little to dispel him of that notion.”