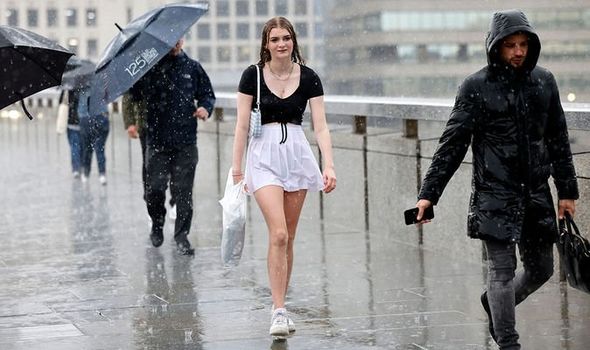 The Met Office said a brief ridge of higher pressure today is set to bring settled conditions across the country. But low pressure is back in charge tomorrow with a front that moves from west to east and will bring rainfall for many regions.

Spokesman Oli Claydon said that people can then expect “heavy blustery showers for the northern half of the UK with a greater chance of it remaining dry in the South and East”.

But the sun should make a reappearance before the weekend.

Meteorologist Craig Snell said: “As we head towards the middle of the week, the showers take a bit of a step back. There will be some showers in northern and eastern parts but not as impactful as they have been.

“In the southern half of the UK, we might have a good few days towards the second half of the week where we will replace the showers with sunshine and warmer temperatures. So it turns into a bit of a north-south split this week but I think for all of us the heavy rain will have passed.”

Temperatures today will reach around 68F (20C) in the North while the South will be slightly warmer at about 72F (22C). And the mercury will rise tomorrow reaching 75F (24C).

Met Office forecaster Dan Stroud said: “By Wednesday we are looking at highs of 23C to 24C. That is slightly above average for this time.

“We will see a northwest/southeast split with the South-east holding on to the drier weather for longer.”