Victoria has recorded 26 new local cases of COVID-19 as a large market in Melbourne’s inner south east declared their entire venue a tier-1 site after a positive case visited during a trading day last week.

There are 146 active cases of coronavirus in Victoria. Two new cases were recorded in hotel quarantine. Health authorities received 43,674 tests on Wednesday and delivered 14,230 jabs.

The 26 new locally acquired cases are all linked to the current outbreaks, the health department said, and 24 of the 26 cases were in quarantine throughout their entire infectious period.

Prahran Market is undergoing a deep clean after it was revealed a customer, who later tested positive for COVID-19, visited on July 17 between 9.40am and 11.15am.

The market said the health department has declared the entire market a tier-1 site. 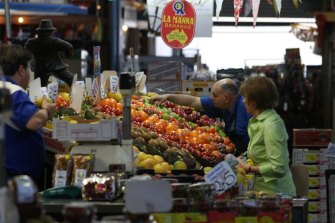 “Due to the broad geographic spread of the traders, DHHS has taken the step of classifying the whole of Prahran Market a tier-1 exposure site,” the statement said.

It comes as Prime Minister Scott Morrison expressed regret for declaring the vaccine rollout was “not a race” when the program has fallen behind schedule, promising he will try to make up the lost ground.

Mr Morrison also said he had repeatedly asked the nation’s peak medical experts to review their advice on the AstraZeneca vaccine in order to accelerate the program.

He also confirmed he had spoken to the global chief executive of Pfizer, Albert Bourla, about increasing vaccine supplies after being asked last week why he had not taken the issue to the top of the company.

NSW Premier Gladys Berejiklian said she had gone “blue in the face” on the need for urgency with vaccine supplies, while Victorian Premier Daniel Andrews warned earlier in the week that millions of people wanted a jab but were being forced to wait. 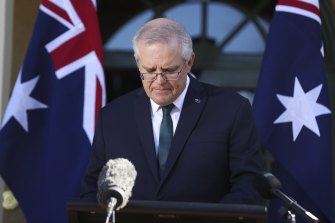 “Those delays are regrettable. People have perfect hindsight after these events,” Scott Morrison said of the Vaccine rollout.Credit:Alex Ellinghausen

The Liberal leader’s intervention came as Victoria recorded 22 coronavirus cases on Wednesday – the highest daily total since September last year but all have been linked to current outbreaks.

Chief Health Officer Brett Sutton said, however, he was encouraged that 16 of those cases were isolated for their entire infectious period and predicted the number of community infections had peaked.

Mr O’Brien told The Age that if the Sydney removalists who sparked one of the state’s two Delta outbreaks were forced to undergo a rapid COVID-19 test at the border, “we wouldn’t be where we are today” and criticised the speed at which the government tightened rules to prevent COVID-positive people travelling to Victoria.

Stay across the most crucial developments related to the pandemic with the Coronavirus Update. Sign up for the weekly newsletter.