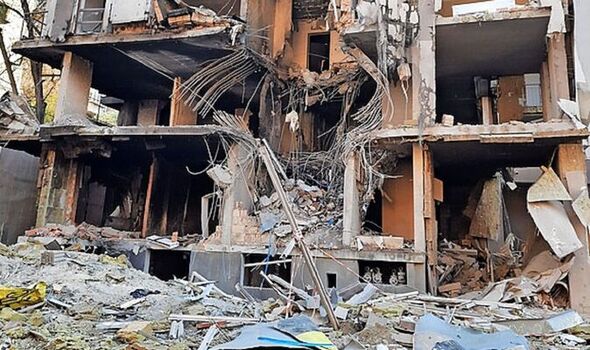 The face of a building across the road has been blackened by the blast. Apartments in a high-rise next door have had their windows knocked out.

Tanya, 62, was out for a walk with her husband when she heard the roar of the air strike.

“I grew up in this neighbourhood,” she says. “My grandmother settled here with my father after returning from Russia, where she was evacuated to during the Second World War.”

Now Tanya harbours nothing but loathing for the country that provided her grandparents a refuge from the Nazis. She explains: “I hate the Katsap (the traditional pejorative term for Russians used by Ukrainians). This war will not end until they cease to exist as a nation.” Her husband, a civil engineer, had immediately made his way to the scene of the explosion to check for signs of imminent collapse.

The body of Radio Liberty journalist Vira Hyrych, who lived in the building, was removed from the rubble today. So far, 10 people have been reported injured.

Tanya says: “One woman who got out of the building was so dazed she didn’t remember where she lived.”

The newly built block of flats was largely empty as many residents had already fled or were yet to move in. Now scorched concrete and twisted steel frames make up its lower floors.

Several feet of rubble covers the pavement below and the all-too-familiar scent of explosives permeates the air.

Tanya’s nearby block only sustained a broken window. During the siege of Kyiv, she says there was a Russian among her building’s residents, taking cover in the basement. She recalls: “I told him what I thought of Russians and he called me a fascist.”

Thirty-something Pavel, who lives in a building near Tanya’s, said the strike blast blew out his windows. He says: “F*** the Russians. May they all die.”