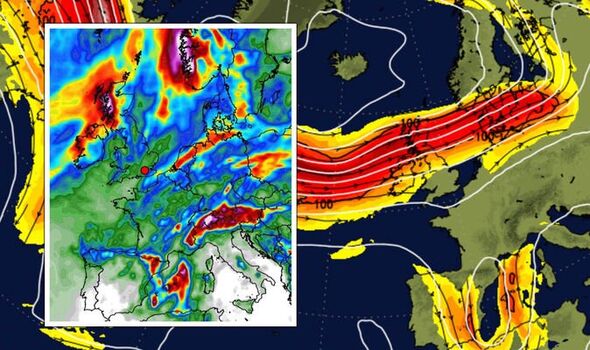 Swathes of Britain will wave farewell to the sun this weekend as grey skies and rain sweep in from the Atlantic. Scotland and northern Britain face the worst of the drenching while southern regions cling on to the warmth. Thermometers will nudge the mid-20Cs in the southeast while elsewhere will hover between the mid to high-teens.

The UK is also braced for up to four inches of rain over the coming days and 70km/h-plus winds.

Met Office deputy chief meteorologist Dan Rudman said: “The strengthening of the jet stream increases the chances of low-pressure systems developing over the Atlantic being pushed towards the UK.

“Although there are still some details to be determined on the depth and timings of these lows, what we do know is that there’s some unsettled weather on the way next week, with some strong winds likely from the middle the week, especially in the north.”

The jet stream, which has been wedged north of the UK, which will sweep southwards opening the floodgates to a barrage of Atlantic weather systems.

Rainfall charts reveal torrents of rain pounding parts of the country before next week while western regions brace for strong winds.

Southern and central Britain may escape the worst of the hammering where above-average temperatures and clear skies will draw out the summer spell.

But for most, this week will bring cooler temperatures and the risk of at least the odd downpour.

Met Office meteorologist Aidan McGivern said: “A fresher airflow from the west this weekend will bring some fairly mixed conditions with some showers and some longer spells of rain.

“It will feel cool where we have cloudier conditions in Scotland, and here will see heavy showers at tines.

“It is staying largely dry in the southeast into Sunday, with some sunny spells, and temperatures will be a little higher than on Saturday.”

Forecasters admit to tearing their hair out over the recent forecasts which have changed hour to hour.

While some models hint at the return to warmer weather, others predict a gloomier picture of rain and chilly winds.

Most experts agree the next week will see a more unsettled picture as weather systems plough in from the Atlantic.

Jim Dale, meteorologist for British Weather Services, said: “The outlook for the coming days is uncertain, but it looks like a very mixed picture with rain and unsettled conditions in the forecast.

“We are seeing air masses colliding, warmer air from France and cooler air over the UK, and that always brings unstable conditions.

“Through the next week we also expect to see temperatures down compared to the very warm weather during mid-May.

“We expect to see cool days and some very cool days.”

The grim outlook has not deterred bookmakers from slashing the odds on a summer scorcher.

Coral is offering 4-5 from 6-4 on temperatures hitting 30C at the start of June for the Platinum Jubilee and 1-2 on a record summer.

Spokesman John Hill said: “Our betting suggests we could be set for glorious weather during the Platinum Jubilee weekend, as we make it odds-on for temperatures to reach as high as 30C.

“Looking further ahead, the odds continue to fall on this summer being the hottest ever in the UK.” Grey skies and rain however, have prompted Ladbrokes to take a U-turn from the sun with 6-4 on the wettest May on record.

Spokesman Alex Apati said: “It’s looking increasingly likely this rain isn’t going anywhere, and we could be set for a record-breaking wet May as a result.”