The ACTU has warned that decades of progress towards economic gender equality could be reversed unless policies to address "the twin crises facing women" are put in place.

Michele O'Neil, the council's president, says last month's federal budget exacerbated inequalities for women in the labour market and tax system, and a high-level body made up of representatives from government, industry and unions should be established to ensure December's mid-year economic fiscal outlook and next year's budget updates "deliver for women as well as men". 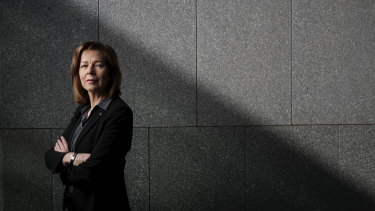 Michele O’Neil and the ACTU say the pandemic has exacerbated disadvantage for women and targeted policies must be developed before forthcoming budget updates.Credit:Alex Ellinghausen

Ms O'Neil identifed job losses on the one hand and a combination of increased childcare and household labour demands as the "twin crises" facing women.

"The government has really failed to realise there were such structural problems for women prior to the pandemic … their response disproportionately supported men at a much higher rate than women, who are more likely to be in insecure and lower paid work," Ms O'Neil said.

"It's like they failed to understand what's happened [to many women]," she said. Tax cuts favouring high-income earners meant "for every dollar a woman receives out of the tax cuts, men will get $2.28".

The ACTU will release a paper titled No one left behind: A gender-equal COVID-19 recovery plan on Wednesday that argues the commonwealth budget and other policy decisions "have hurt women".

"Government responses have not adequately addressed the way the COVID-19 crisis is reproducing and deepening existing structural inequality faced by women and intensifying work and family pressures. In many ways, government policies have made it worse.

"Women already faced significant risks of violence and harassment pre-pandemic and COVID-19 has exacerbated these risks, both at work and at home. For all these compounding reasons, the COVID-19 crisis has impacted on women more severely," the report says.

Ms O'Neil said the proposed body should start by reviewing existing recovery policies and identifying gaps and aspects of it that are disadvantaging women, including the JobMaker program, which she says excludes older women and those who have had to drop out of the labour market due to caring responsibilities.

It should also examine the need for jobs creation programs in the public and community sectors, health and aged care, hospitality, tourism and other industries where many women are employed, Ms O'Neil said.

"The voice of women is missing in this," she said. "We would welcome employer representatives [on the new body] but it's important they come from sectors where there is a majority of women working.

"We need high-level advice to government that they need to act on quickly given the depth of the recession they're predicting."

She said the reintroduction of free childcare would be the most significant boost to women's workforce participation and "we need a permanent universal early childhood and care system – it pays for itself".

Recent data shows men are suffering a bigger blow than women to their job prospects across most states as the pandemic imposes sweeping layoffs nationwide, sparking a rethink about the “pink recession” seen in the first phase of the crisis.

But labour figures show unemployment reached 7.6 per cent for women in Victoria in September compared to 5.9 per cent for men, one of the widest gender gaps in employment outcomes since the depths of the 1990s recession, when men were more likely than women to be out of work.

Research to be released by the Australia Institute on Wednesday shows increased public funding of childcare "is nearly 20 times more effective at creating jobs" than a tax cut of the same size.

Dr Janine Dixon, of the Victoria University Centre of Policy Studies, compared the cost, employment creation effect and impact on GDP of increased childcare spending with tax cuts and found if 450,000 Australians with children under 5 who say they would like to work more hours were supported to do 10 extra hours a week, GDP would grow by $15 billion a year by 2030.

Australia Institute chief economist Richard Denniss said a net increase of government spending on childcare of $2.8 billion would create 135,000 new jobs a year by 2030, but a tax cut of about the same size would create 10,000 jobs.

"You are directly creating employment when you write the cheque: you are employing childcare workers, and all those workers' wages trickle down into the economy. And a whole bunch of people with caring responsibilities will be able to work," he said.

With David Crowe and Jennifer Duke

Get our Morning & Evening Edition newsletters

The most important news, analysis and insights delivered to your inbox at the start and end of each day. Sign up here.

Tags: Is, missing, of, the, Voice, women