Close to 40 per cent of recent university graduates say they are not making full use of their qualifications, but those who attend institutions with business partnerships are getting an edge when it comes to finding jobs.

Vince Lam was able to get a job in marketing after graduating from the University of Sydney with a related business degree. He said the work experience he gained at the university’s marketing department and through industry partnerships had helped him get a job after graduation. 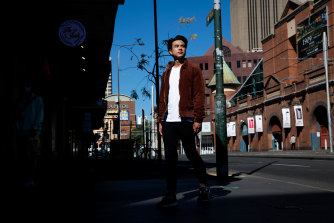 Vince Lam, a recent graduate in Marketing and Design, has managed to secure a job in Sydney.Credit:Janie Barrett

“Having work experience definitely worked,” he said. “The industry experience gives you exposure to what it is like in the workplace, so you can showcase to employers that you are able to respond to certain situations.”

Across Australia, close to 40 per cent of new university graduates have reported they were not making full use of their qualifications for reasons including a lack of work experience and employment opportunities.

Melbourne University economist Jeff Borland said the new figures from The Quality Indicators for Learning and Teaching 2021 Graduate Outcomes Survey released this week showed how difficult it had become in the past 15 years for graduates to get jobs in their field of study.

The longitudinal survey found that 38.8 per cent of employed undergraduates reported their skills and qualifications were not fully utilised shortly after finishing their degree in 2018. This fell to 27.3 per cent three years after graduation in 2021.

The most common reason employed graduates gave in the QILT survey for why they were not fully utilising their skills and education three years after graduation was job satisfaction with the current job. About 17 per cent said they did not have enough work experience and 14 per cent said there were no suitable jobs in their area of expertise.

Professor Borland said 15 years ago, university graduates could get jobs matched to their university qualifications much sooner than they could now.

“Young people are the ones who get squeezed in the labour market,” he said.

“Fifteen years ago there wasn’t that much difference between outcomes after four months and three years.

“There has been a sizeable increase in the proportion of young people who are having to wait to get the type of job they trained for and want.”

Lisa Bolton, Director QILT Research and Strategy from the Social Research said there was a small drop in undergraduate employment levels in 2021 (88.9 per cent in full-time employment) compared with the same time in 2020 (90.1 per cent), “but this was in line with a general softening of the labour market”.

“While there has been a rise in employment, including youth employment from the depths of the pandemic in 2020, it is not clear whether these are the high-quality jobs you’d be expecting young people to move into following tertiary education. It is not just the number of jobs that is important, but the quality of the jobs,” he said.

Global higher education analyst QS Quacquarelli Symonds released its annual rankings on Thursday which recognised the University of Sydney and the University of Melbourne in the top 10 institutions recognised for their pathways to employment. Universities are rated on partnerships with employers including internships, the number of sectoral leaders among their alumni, the frequency with which employers are present on campus, and a location-adjusted graduate employment rate.

The University of Sydney retained its global fourth-place rank, followed by The University of Melbourne in eighth position, after placing 7th the previous year. The University of New South Wales was placed 32nd, down from 27th among 550 institutions ranked according to a survey of 50,000 employers.

A spokeswoman for the University of Sydney said its industry partnerships had helped students develop careers and life skills. “We are grateful to our partners for the valuable opportunities they provide our students – including internships, placements and projects – and are pleased the latest rankings acknowledge their breadth and depth,” she said.

A University of Melbourne spokeswoman said its undergraduate programs had benefited from strong industry connections, alumni networking opportunities, internships and placements. A spokeswoman for UNSW said it was focused on increasing work-integrated learning opportunities through industry partnerships.

The QS analysis found The University of New South Wales produced the highest number of successful business leaders, philanthropists and entrepreneurs. The University of Sydney was found to have forged more partnerships with industry than any other Australian university.