Omicron may only cause cold-like symptoms in vaccinated elderly people, according to ‘super-spreader’ 60th birthday party in Somerset

Fully jabbed elderly people may only suffer ‘cold like’ symptoms from Omicron according to early reports from a ‘super spreader’ 60th birthday-bash Somerset.

According professor of genetic epidemiology Tim Spector who runs the ZOE Covid symptom study, even though 16 of the 18 guests caught Omicron at the party all appear to have suffered only mild symptoms with no one requiring hospital care.

With the party attendees being between 60-75-years-of-age, the incident has sparked hope that even among the populations more vulnerable to Covid, such as the elderly, Omicron cases will mostly be mild.

The super-spreader party was originally reported through the ZOE study, which asks people to self report Covid symptoms and their vaccination status, and appears to have occurred on 5 December.

Professor Spector said partygoers, who he said had all been vaccinated, infected with Omicron were mainly experiencing cold-like symptoms.

‘What we’re seeing so far is that symptoms are very, very mild,’ he said.

‘Most of them had symptoms of a cold — sniffles, sore throat and fatigue were common.

‘Only two had classic symptoms of Covid, fever and loss of smell or taste. Nobody had to see their doctor or go to hospital.’

In a YouTube video later detailing the incident Professor Spector said patient zero of the super-spreader event was a teacher, and that 16 people had been informed that they had, or most likely had, Omicron by NHS Test and Trace.

Professor Tim Spector said a contributor to the ZOE Covid study has reported a Covid ‘super spreader event’ where many guests, all of whom were vaccinated, caught the new variant, though thankfully their symptoms are all mild 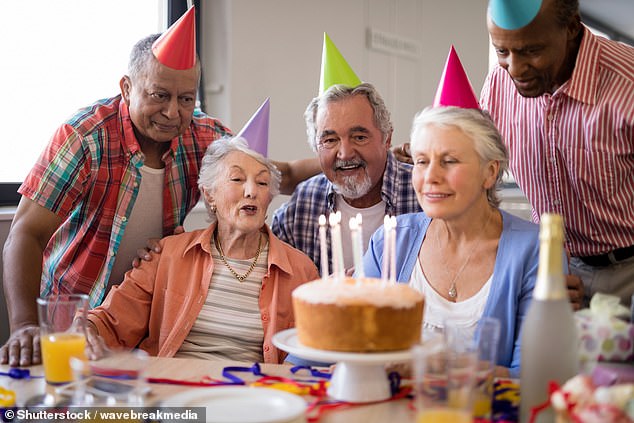 According to reports 14 out of 18 guests of the 60th birthday bash caught the new Omicron variant, though they appear to only be suffering mild cold-like symptoms

While the event may demonstrate the generally mild symptoms of Omicron it also demonstrates how potential infectious Omicron can be.

Professor Spector reported that all guests had been vaccinated and 10 of the guests infected had received their Covid booster.

Omicron is believed to be partly more infectious because of its 30 plus mutations compared to the original Covid strain, meaning antibodies in vaccinated individuals, and those with prior Covid infection, are less likely to recognise the new variant.

All party guests had also taken lateral flow tests before attending in attempt to ensure they did not have Covid and spread it to others.

With fewer restrictions and people mixing more freely compared to the previous Delta wave so called ‘super-spreaders’ are becoming more common with Omicron.

A ‘super-spreader’ event is an occasion during a pandemic, were one or more people infected with the disease manage to infect many other people, usually due the nature of the event such as party, such as the 60th birthday bash in Somerset

Another so-called Omicron ‘super-spreader’ was a Christmas party in Oslo, Norway where 120 people are suspected of catching Omicron from one infected attendee,

Seventy of the infected were employees of solar power company Scatec, who were celebrating their Christmas work night out, while the remaining 50 were other guests at the restaurant. The party was held in a closed room but guests reportedly mingled with other people in the restaurant after 10:30pm, when it turned into a nightclub.

Doctors involved in tracing the outbreak say the infected are so far only suffering very mild symptoms like fevers, coughs, headaches and tiredness following the festive do on November 26.

While boosters have been shown to provide greater protection against Omicron it is not clear if the four people who did not catch Covid at the party were those who got their third Covid jab.

Professor Spector also told The Guardian that he was advising people to stay at home and away from parties if they had cold-like symptoms and also wear high-quality masks on their way to a venue.

‘Avoid large gatherings and split your groups up into smaller ones where you can control the environment and get everyone to test that day,’ he said.

The party was held in a house where guests shared lunch, with 14 of the infected over 60-years-old.

Reports on the supposed mildness of Omicron come as Boris Johnson confirmed today that at least one person has died of the variant here in the UK.

News of the death came hand-in-hand with chaos in Britain’s attempts to both track Covid cases and fulfill the prime minister’s new pledge to dish out a million boosters per day to beat the super-mutant variant.

Speaking during a visit to a vaccination clinic in Paddington, west London, Mr Johnson did not reveal the age of the person who died, or if they had underlying health conditions, which made them vulnerable to Covid.

Some 10 people infected with the variant are in hospital, health chiefs said. Britain’s youngest patient is 18 years old, while the oldest is 85. The majority are double-vaccinated, but officials would not reveal whether any had also had a booster jab.

It came as vital stocks of lateral flow tests ran out after ministers called on Britons to take one before meeting family this Christmas.

A message on the Government website says there are ‘no more home test kits available right now’ and tells Britons to ‘try again later’. A spokesman insisted there was no shortage, but said ‘exceptionally high’ demand meant they had stopped taking new orders while existing ones were completed. They said the kits could still be picked up from community sites including pharmacies, schools and colleges, and that PCR swabs are available.

In another sign of chaos, Britons desperate to get their top-up doses were left standing in up to five-hour queues as centres warned they were already running low on doses this morning. Twenty-somethings were turned away in confusion at Manchester City’s Etihad Stadium as they tried to get booster jabs.