Caracas: Venezuela’s newest superhero is tall and muscular, flies over Caracas in red tights and a blue cape, and destroys enemies with an iron fist. 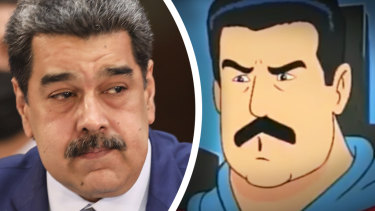 President Nicolas Maduro and Super Bigote to the rescue of the Venezuelan people.Credit:Age

The first episode of Super Bigote, which aired this month on Venezuela’s state-run television, opens in the Oval Office, where a rotund leader with a shock of blond hair – he appears to be a cross between The Incredibles villain Syndrome and former president Donald Trump – plots an attack.

Pressing a red button, he launches a drone that attacks the Venezuelan electrical grid, causing a nationwide blackout. A woman cries for help. A patient wakes up in the middle of surgery screaming. Characters resembling Venezuelan opposition leaders Henry Ramos Allup and Julio Borges, dressed as chickens, laugh and celebrate.

Then Super Bigote – the name is Spanish for “Super Moustache” – arrives. 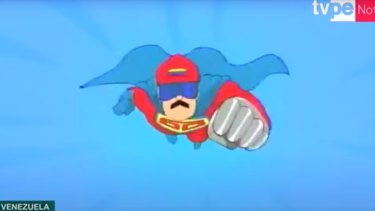 “Team,” he says, “we’ll destroy them together. I’ll take care of the bad guys.” He smashes the drone and restores electricity; the episode ends to the tune of salsa legend Ray Barreto’s Indestructible.

The episode, which illustrates the government’s claim that sabotage caused the four-day blackout here in 2019, has drawn both praise and derision online.

“Imagine all the haters looking at this,” one admirer tweeted. “The revolutionary originality and its Hollywood models,” mocked another.

But beyond the laughs, analysts see an effort to improve the image of a leader in need of support in a country struggling through a years-long humanitarian crisis.

“Cartoons are a classic medium of propaganda for authoritarian regimes,” said David Smilde, a sociologist at Tulane University who focuses on Venezuela. The new show “effectively provides an interpretation of Venezuela’s governance disaster where the people are the victims, the US is the villain and Maduro saves the day.”

No one has taken credit for the creation of Super Bigote and it’s unclear whether more episodes will air. But the cartoon appears at a fraught moment in Venezuelan politics. Maduro’s government claimed victory in regional elections last month, but turnout was the lowest in two decades, and international observers detected problems with the vote.

“In the context of a more successful authoritarian project, this type of propaganda might be worrying,” Smilde said. “But polling suggests that the great majority of the population blames Maduro for the humanitarian emergency they are experiencing and do not believe his conspiracy theories.” 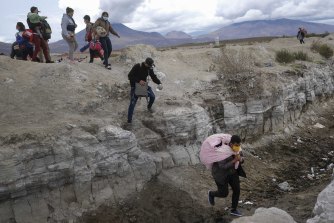 Migrants from Venezuela cross into Chile near Colchane from the Bolivian border last week. Hundreds of thousands of Venezuelans have fled the crisis at home to try a new life in Chile, Brazil and the US.Credit:AP

Venezuelans have seen national leaders made into icons before. Hugo Chavez, the founder of the socialist state, was turned into an action figure, complete with his signature red beret and military uniform. His face continues to watch over Venezuelans from murals and posters. After his death, a member of his party memorably prayed before his image, turning Our Father into Our Chavez.

Chavez picked Maduro to succeed him. But the protégé has never enjoyed the founder’s popular support. 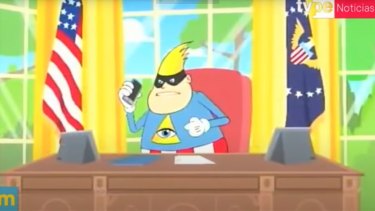 “The point is to position the Chavista narrative that everything that happens is the product of a conspiracy between a group of very specific opposition leaders and the White House, in a format that is less heavy than his speeches, that fewer and fewer people want to hear,” she said. “The government knows that they need to promote themselves in all formats possible.”

Maduro has threatened to wield his moustache against adversaries in the past. In a 2019 speech, he noted that Ecuador’s Lenin Moreno had accused him of fomenting unrest in the country.

“President Lenín Moreno said that what is happening there is my fault; that I move my moustache and knock down governments,” Maduro said in a live message on national television. “I’m thinking about which government I can knock down next with my moustache.” He then showed a picture of Super Bigote on his mobile phone.

The government has not commented on the new cartoon.

“It explains the crisis from a political perspective and geopolitical causality where there are good and bad.”

El Chiguire Bipolar, a satirical news site, posted a picture of the new character responding to a moustache in the night sky in the style of the Bat-Signal.

“One thing is for sure,” Stelling said. “At least in the world of humour, it had an impact.”