Labour was branded the ‘true nasty party’ last night after Sir Keir Starmer refused to discipline his deputy for describing the Tories as racist ‘scum’.

The Labour leader said he would not have used the hate-filled words aimed at the Tories by his deputy and bitter rival Angela Rayner. But he refused to say she should apologise.

In a late-night rant at Labour’s annual conference on Saturday, Mrs Rayner said she was ‘sick of shouting from the sidelines’ at ‘a bunch of scum, homophobic, racist, misogynistic, absolute pile of… banana republic… Etonian… piece of scum’.

The 41-year-old former care worker doubled down on her claims yesterday, singling out Boris Johnson, Priti Patel and other members of the Cabinet who have ‘said appalling things’. 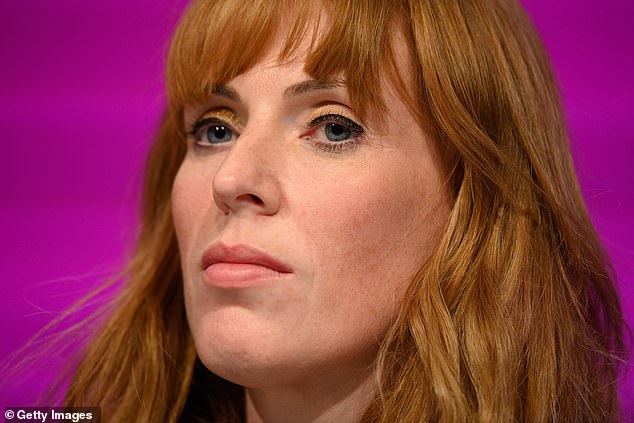 A defiant Mrs Rayner said her ‘post-watershed’ comments were designed to put ‘fire in the belly’ of party activists during a conference reception.

She claimed that her language was the kind ‘you would hear very often in northern working-class towns, we even say it jovially to other people, we say ‘it’s a scummy thing to do’ and that to me is my street language’.

And she told Sky News she would not apologise unless the Prime Minister first said sorry for ‘comments he has made that are homophobic, racist and misogynistic’.

Sir Keir looked visibly discomfited when quizzed about her remarks during a setpiece TV interview which he had hoped to use to set out his stall as this week’s conference got under way.

‘Angela and I take different approaches and that is not language that I would use,’ he told the BBC’s Andrew Marr show.

Sir Keir said her comments were part of ‘a fizz of ideas, there are arguments, disagreements, comings together’. 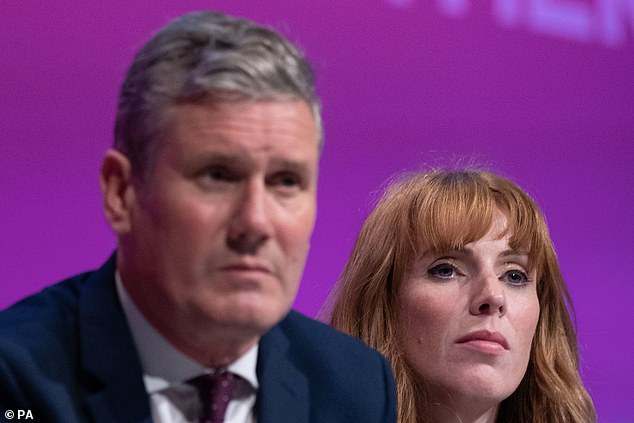 Asked whether she should apologise, he said it was ‘a matter for Angela, but I would not have used those words’. He said he would ‘talk to Angela about it later on’. Labour officials later declined to comment on the details of his meeting with his fiery deputy.

Mrs Rayner was more restrained during appearances on the conference fringe, telling laughing delegates: ‘I’m choosing my words very carefully.’ Labour’s deputy has made little secret of her belief that she would make a more effective leader than Sir Keir.

Senior figures fear the tension could now overshadow a conference seen as a ‘make or break’ event for Sir Keir’s leadership.

Senior Tories yesterday condemned Mrs Rayner’s language, pointing out it is just two years since she lectured fellow politicians on their ‘responsibility to look at making sure our discourse and disagreements are done in a respectful way’.

Conservative Party chairman Oliver Dowden said her comments provided further evidence ‘today’s Labour Party exudes a sense of looking down on people who believe in this country, including the many millions who voted Conservative at the last election’.

Mr Dowden said: ‘For all the Left’s talk about kindness and compassion they tend to produce the worst vitriol, abuse, intolerance of other views. It’s in hardline elements… that you find the true nasty party.’

Foreign Office minister James Cleverly said voters would see a Tory party which has had two female prime ministers and the ‘most diverse government’ and ‘they’ll know she’s talking c***’. Some senior Labour figures also questioned Mrs Rayner’s tactics, amid fears they could further alienate ‘red wall’ voters who defected to the Tories.

Shadow Foreign Secretary Lisa Nandy and former leader Ed Miliband both declined to defend her comments. Former Labour Cabinet minister Lord Adonis said Mrs Rayner’s intervention had been designed to trigger a leadership contest – and called on Sir Keir to sack her if she refused to resign.

Michael Dugher, former Labour frontbencher, said: ‘Actually, lots and lots of people in ‘northern working class towns’ don’t call Tories ‘scum’. They vote for them. Labour need to face up to that reality and rise to the challenge.’