Minneapolis: Daunte Wright, the young black man shot by an officer during a traffic stop in suburban Minneapolis, was not “just some kid with an air freshener,” but a “prince” whose life ended too soon at the hands of police, the Reverend Al Sharpton said Thursday during an emotional funeral.

Hundreds of people wearing COVID-19 masks packed into Shiloh Temple International Ministries to remember Wright, a 20-year-old father of one who was shot by a white police officer on April 11 in the small city of Brooklyn Center. 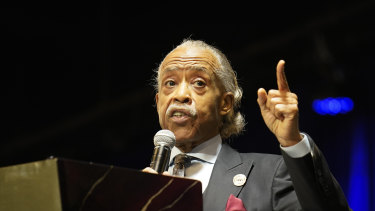 The funeral was held just two days after former Minneapolis police Officer Derek Chauvin was convicted in the death of George Floyd and amid a national reckoning on racism and policing.

“The absence of justice is the absence of peace,” Sharpton said. “You can’t tell us to shut up and suffer. We must speak up when there is an injustice.”

The civil rights leader’s thundering eulogy included a stinging rebuke of the possibility that Wright was pulled over for having air fresheners dangling from his mirror. Wright’s mother has said her son called her after he was stopped and told her that was the reason. Police said it was for expired registration. 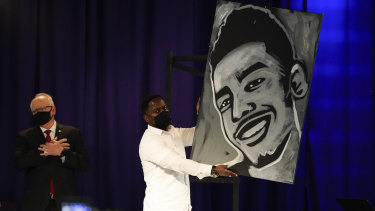 A musical and visual tribute are presented during funeral services for Daunte Wright at Shiloh Temple International Ministries in Minneapolis was fatally shot by a Brooklyn Center, Minnesota.Credit:AP

“We come to Minnesota as air fresheners because your air is too odorous for us to breathe,” he said.” We can’t breathe in your stinking air no more!”

Brooklyn Center’s police chief said it appeared from body camera video that the officer who shot Wright used her pistol when she meant to use her Taser as Wright struggled with police. The 26-year veteran, Kim Potter, is charged with second-degree manslaughter. Both she and the chief resigned after the shooting.

Ben Crump, attorney for both the Floyd and Wright families, has called for more serious charges against Potter and said Wright’s son “is going to get old enough to watch that video of how his father was slain so unnecessarily. A misdemeanour, a misdemeanour.”

“It’s too often that traffic stops end up as deadly sentences, a death sentence,” Crump said, adding he wants Wright’s son to know, “We stood up for Daunte, his father.”

Daunte’s mother, Katie Wright, told mourners, “The roles should be completely reversed. My son should be burying me,” before burying her hands in her face.

Wright recalled her son becoming a father to a boy born prematurely: “He was so happy and so proud, and he said he couldn’t wait to make his son proud. Junior was the joy of his life. He lived for him every single day.”

Funeral attendees were brought to their feet when artist Ange Hillz painted a portrait of Wright — white paint on a black canvas — as trumpeter Keyon Harrold played “Amazing Grace” and “Lift Ev’ry Voice and Sing,” the Black national anthem. 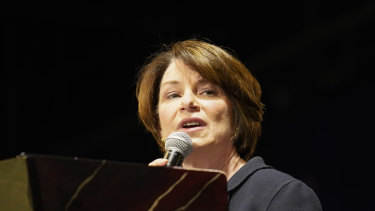 And during a silent reading of Wright’s obituary, some could be heard crying softly.

The families of several other Black people killed by police were there, too, including the mothers of Philando Castile, who was shot by a police officer during a traffic stop in a Minneapolis suburb in 2016, and Eric Garner, who was filmed saying “I can’t breathe” in a fatal 2014 encounter with New York City police.

Also attending were relatives of Oscar Grant, killed in 2009 by a California transit officer who mistook his service weapon for a stun gun, similar to the Wright case, and of Emmett Till, the teenager whose 1955 lynching in Mississippi helped spark the civil rights movement, as well as the boyfriend of Breonna Taylor, who was shot in her Kentucky apartment by officers serving a warrant in 2020.

More than a dozen members from an armed team of local men, the Minnesota Freedom Fighters, provided security.

Wright was killed when a scuffle broke out as police tried to arrest him after realising he had an outstanding warrant for failing to appear in court on charges of fleeing police and having a gun without a permit.

It set off protests in Brooklyn Center, a working-class, majority nonwhite city, with hundreds of people gathering every night for a week outside the city’s heavily guarded police station. While the mayor called for law enforcement and protesters to scale back their tactics, the nights often ended with demonstrators lobbing water bottles and rocks at the officers, and law enforcement responding with pepper spray, tear gas and rubber bullets.

The funeral took place as questions surfaced over the death of a 42-year-old Andrew Brown jnr, a black man, in Elizabeth City, North Carolina.

Brown was shot to death on Wednesday by a deputy sheriff trying to serve a search warrant.

An eyewitness said Brown tried to drive away, but was shot dead in his car.

The shooting prompted protests and demands for accountability in the eastern North Carolina city of about 18,000. The deputy, who has not been identified, has been put on leave pending a state investigation.

Tags: ‘Stench, decried, In, of, racism