Australia’s small business operators will be feeling the psychological strain of the pandemic long after lockdowns end, the nation’s leading mental health charity says as it fights for the long-term future of a free telephone coaching service.

Beyond Blue director Kate Carnell and Australian Small Business Ombudsman Bruce Billson say the NewAccess for Business coaching program will continue to be vital for the beleaguered sector long after the emergency phase of the pandemic has passed. 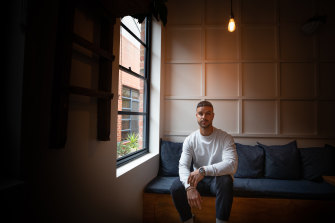 Melbourne cafe owner Jonathan Alexopoulos says a dedicated service such as NewAccess is just what many people in small business need. Credit:Jason South

But the federal Treasury said on Wednesday that the $4.3 million program, part of the Commonwealth’s COVID-19 economic recovery package, had been funded for only a year and was due to end in March 2022.

Ms Carnell, a former Liberal chief minister of the ACT who held the ombudsman role until earlier this year, and Mr Billson, a former frontbencher in the Abbott Coalition government, said the toughest times were yet to come for some businesses and NewAccess should be extended.

The confidential mental health coaching program, delivered by support workers who have business experience, uses “low-intensity cognitive behavioural therapy” to help participants cope with the mental strain of running a business through a pandemic.

Beyond Blue says about 800 small business operators have sought help in the scheme’s first six months for work-related stress, general anxiety and depression.

Three-quarters of inquiries came from Victoria, NSW and Queensland, 61 per cent of participants were women and almost half were sole traders.

One of the NewAccess coaches, Brisbane-based Liana Kabel, said the scheme had prompted many people who might not otherwise have sought help to come forward.

“That’s a lot with men. Because it’s about business, they see this opportunity to come and talk about things; they find it easier,” Ms Kabel said.

Ms Carnell said she wanted NewAccess to continue to operate at least until the end of next year.

“It’s going to be a long haul for many businesses to get that to anything that looks like normal, and this isn’t about money; it’s about the mental health,” she said.

“This is not going to be quick for a lot of those people and I think next year is probably going to be the worst.”

Mr Billson said an increase in calls to his office in recent months from business people seeking help with contractual disputes, unpaid debts, financial pressure from landlords and other problems caused by the pandemic showed that the need for help would not go away once lockdowns ended.

Melbourne cafe owner Jonathan Alexopoulos said he had not had as tough a time in the pandemic as some other small businesses near his outlet, Miss Alex and Co in Elwood.

With the cafe pivoting to a takeaway business through the city’s long lockdowns, the continued human interactions with his customers helped Mr Alexopoulos through the difficult periods.

Although he had not needed to seek help himself, he said he had felt the stress of the pandemic and was enthusiastic about an official help service for struggling businesses.

“It’s definitely a stressful time; you’re constantly having to pivot to keep up with the times,” he said.

“We’re all human, we all experienced all these types of things, and it’s not your fault. This is something that’s completely out of all our hands. So I think [NewAccess] is a really, really good thing.”

In a statement, federal Treasury would not confirm if the program was being considered for fresh funding to extend its life.