THIS is the shocking moment a Ryanair passenger appeared to perform a sex act on the man next to her on a plane – as fellow travellers watched on in shock.

Video footage shared online shows a man holding his drink as a woman bows her head in his crotch. 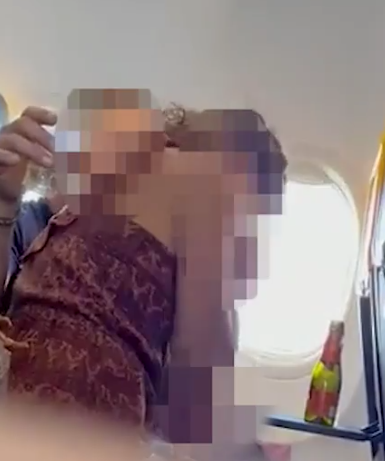 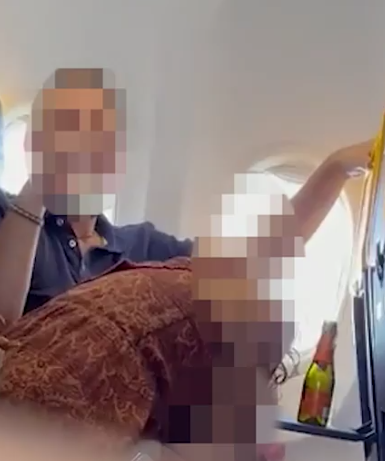 The man appears to close and open his eyes as the woman moves around in his lap.

The clip seems to be being filmed by another passenger on the row across the aisle from the randy pair.

At one point, the pair begin to kiss passionately, with the man fumbling with the woman's clothes.

Moments later, the female passenger can be seen pulling her hair back, appearing to repeat the act again.

"I’ll factor this is when making my next flight booking."

Other users were quick to comment, with one person joking: "Plenty of….leg room."

Another wrote: "@Ryanair who gets fired for letting this go on?"

It is unclear whether the couple were allowed to stay on the flight or told to stop what they were doing.

The couple's behaviour could be considered public decency – an offence which criminalises public behaviour or displays which are lewd, obscene or disgusting.

And according to Ryanair's onboard flight rules, passengers could be removed from an aircraft if they engage in such behaviour.

Its 'code of conduct' for passengers states: "If, in our reasonable opinion, you conduct yourself aboard the aircraft […] in a manner which we reasonably believe may cause or does cause discomfort, inconvenience, damage or injury to other passengers or the crew, we may take such measures as we deem reasonably necessary to prevent continuation of such conduct, including restraint."

It adds: "You may be disembarked and refused onward carriage at any point, and may be prosecuted for offences committed on board the aircraft."