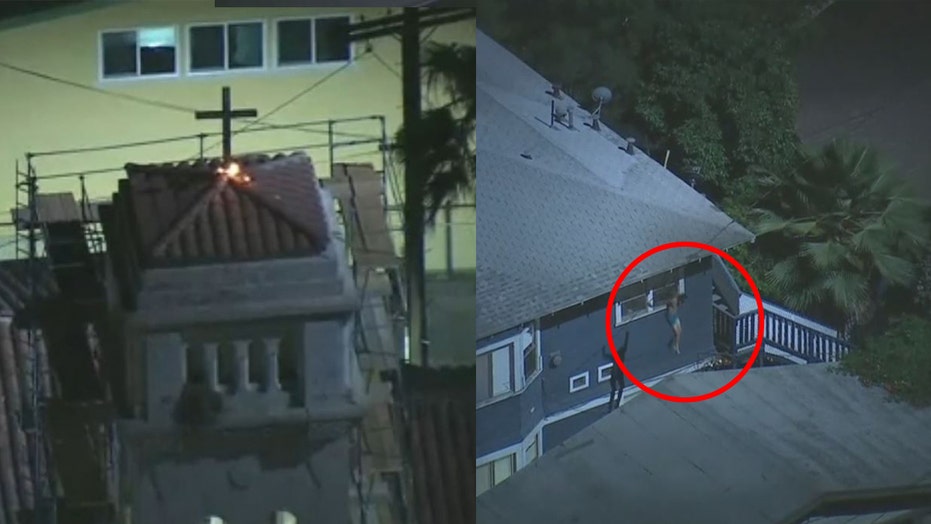 A half-clothed California man was arrested Wednesday after he climbed atop a church bell tower to set fire to a cross and proceeded to jump rooftops and rappel buildings as authorities gave chase.

The man, who was not immediately identified, appeared shirtless and missing a sock while at the top of the four-story St. Mary’s Catholic Church in the Boyle Heights neighborhood of Los Angeles.

A helicopter crew with FOX11 Los Angeles captured video of the man moving across the roof of the church as its cross was ablaze. He can be seen climbing down the church exterior and jumping from rooftop to rooftop several times. He also used wires dangling above the neighborhood to climb up or rappel buildings. 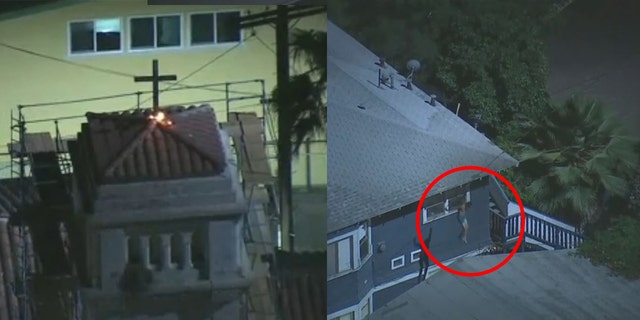 An unidentified man set fire to a cross atop St. Mary’s Catholic Church in the Boyle Heights neighborhood of Los Angeles before jumping from rooftop to rooftop in an attempt to escape police.
(KTTV)

Several times the man appeared hurt after jumping rooftops and lying on his back.

Los Angeles police followed the man’s movements from the ground as he attempted to evade capture.

Police were eventually able to safely detain the unidentified man and firefighters brought him to a hospital, the Los Angeles Fire Department said. Firefighters ensured the fire on the roof was fully extinguished and continue to investigate.

It was not immediately clear what charges the man would face.

No further information was immediately available.

Man vs Chimp: One in 10 Britons think they could win fight with monkey

Man vs Chimp: One in 10 Britons think they could win fight with monkey