‘You’re the party of missed opportunity’: Question Time viewers slam Lib Dem leader Jo Swinson and say she ‘should have stayed at home’

Liberal Democrat leader Jo Swinson was hammered on the BBC Question Time debate tonight as viewers said she should have ‘stayed at home’ and called for someone to press the fire alarm to help her out.

Ms Swinson, who has been in her role for less than 125 days, faced a barrage of criticism for her party’s changing position on fracking, its decision to back student fees and the nuclear deterrent.

She was even told that she is leading a party ‘of missed opportunity’ because of all the policies that they gave up during the coalition government.

Ms Swinson appeared for thirty minutes on the special edition of the programme, which was broadcast from Sheffield. 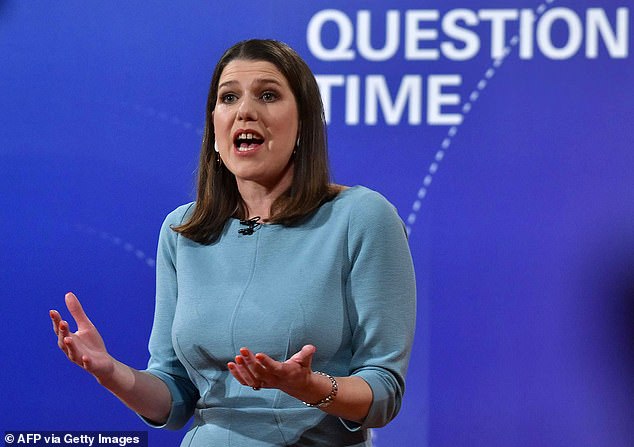 Liberal Democrat leader Jo Swinson was hammered on BBC Question Time tonight for her party’s changing position on fracking, its decision to back student fees and how it hopes to keep the nuclear deterrent

Ms Swinson faced a heated Question Time audience, with one member asking her to ‘clarify’ her position on fracking due to the party’s changeable policy, while a second said the party had taken Labour’s policies.

‘Recently this week you said you would be ok with using nuclear weapons’, said a woman wearing a blue top, ‘can you please clarify why you think that would be ok and how is that going to protect the planet?’

Another audience member said: ‘You seem to be the party of missed opportunity.

‘When you were in coalition with the Conservatives you failed to stop them doing a number of things which you said you would now reverse.’

The criticism came moments after the Liberal Democrat leader had been chastised for her party’s chameleon-like position on fracking.

She was heckled as she explain the party’s decision to back nuclear weapons because they could help to encourage other countries to destroy their stocks, and said that they no longer supports fracking.

‘We are against fracking’, she said.

‘We want a ban on fracking because the climate emergency is such that we shouldn’t be starting new fossil fuel industries’. 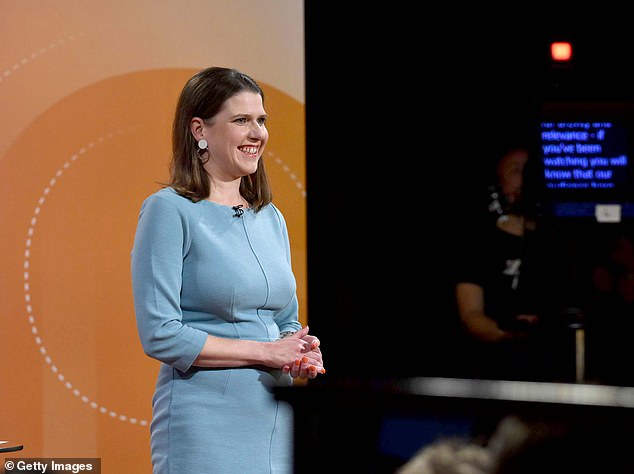 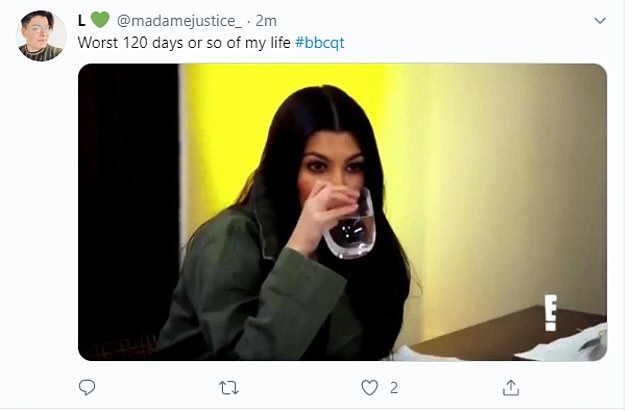 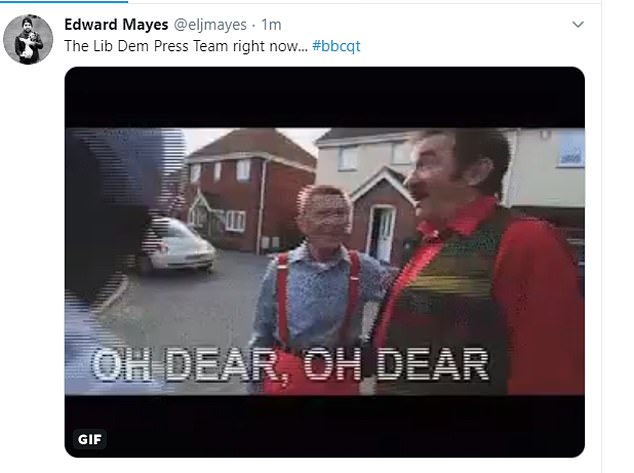 However, social media users were less than convinced by the Liberal Democrat leader.

One commented: ‘She is being hammered. She should have stayed at home.’

Another said: ‘This poor woman. Someone press the fire alarm or something and save what’s left of her a**.’

A third person said she had just got a ‘Yorkshire flea’ in her ear, while a fourth posted a picture of a woman drinking a glass of water with the caption: ‘Worst 120 days or so of my life.’

Another social media user branded her performance ‘cringeworthy’ saying: ‘This performance by Swinson is cringeworthy. I’m squirming for her and I can’t stand her.’

A final person added: ‘Oh my god! This could not be any worse for Swinson.’

At the start of the debate Jeremy Corbyn pledged to adopt a ‘neutral stance’ in another EU referendum under Labour as he came under fire from voters during a televised grilling.

The Labour leader was questioned over fears for businesses, anti-Semitism, misogyny, freedom of speech and Scottish independence during a special episode of BBC’s Question Time on Friday.

As they try to tip the balance in the campaign for the December 12 General Election, each leader was being quizzed for half-an-hour during the show hosted by Fiona Bruce in Sheffield.

Mr Corbyn went first and faced a barrage of tough questioning and groans.

He made his clearest comment to date over how he would act in another referendum, which Labour plans to hold between a new deal and the option to Remain within six months of taking power.

Having been asked how anyone could vote Labour without knowing what outcome he would campaign for, Mr Corbyn said that he would start by negotiating a ‘credible’ Leave deal before he was interrupted by laughing. 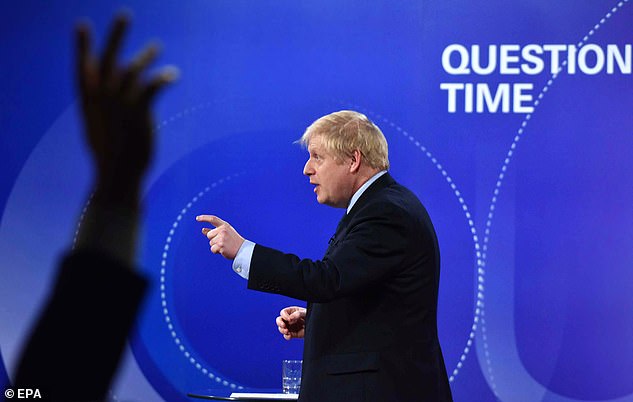 Boris Johnson fended off questions about why he hadn’t released the report on Russia during the debate in Sheffield, South Yorkshire 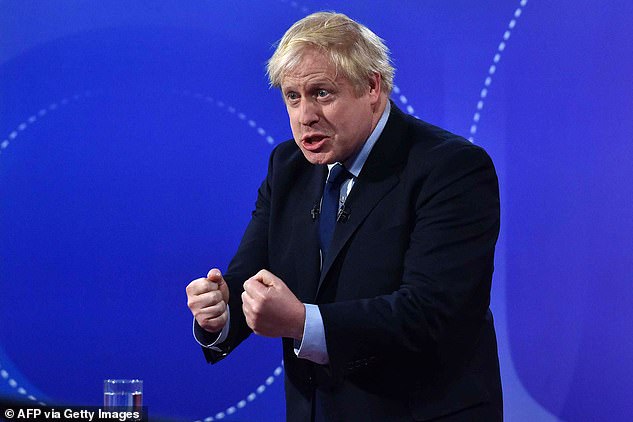 ‘My role and the role of our government will be to ensure that that referendum is held in a fair atmosphere and we will abide by the result of it,’ he continued.

‘And I will adopt, as prime minister, if I am at the time, a neutral stance so that I can credibly carry out the results of that to bring communities and country together rather than continuing an endless debate about the EU and Brexit.’

Ms Bruce pressed Mr Corbyn on whether he would not pick a side during another referendum, as she brought his half-hour to a close.

Mr Corbyn, who plans to re-nationalise key utilities and increase corporation tax, had been quickly forced to go on the defensive when he was asked first if ‘businesses should be frightened of an incoming Labour government’.

He argued ‘they should not be frightened’, saying that only the ‘biggest businesses will be asked to pay a little bit more’ in corporation tax, but that that level would be lower than 2010’s. 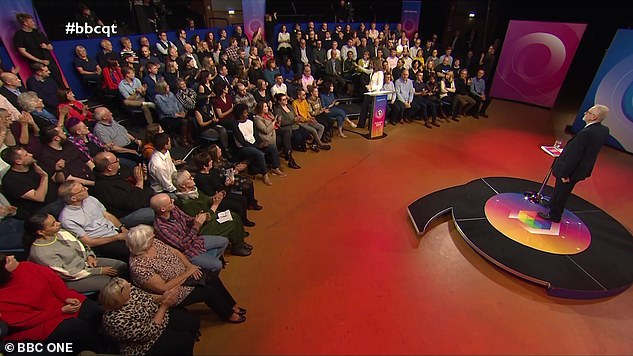 Jeremy Corbyn was the first politician to speak on BBC Question Time, and was followed by Nicola Sturgeon

Another angry member of the audience said that ‘freedom would be completely eroded’ if Mr Corbyn got the keys to Number 10.

‘I have spent my life getting into hot water for defending people because I believed their human rights should not be violated and that’s the kind of government that I intend to lead,’ he replied.

‘I simply say to you that bad behaviour, misogynism, racism in any form is absolutely not acceptable in any form whatsoever in my party or in society,’ Mr Corbyn said.

SNP leader Nicola Sturgeon came next, and she cast doubt on Mr Corbyn’s stance of not allowing another independence referendum in the early years of an administration under his leadership.

She suggested he was not ‘going to walk away from the chance to end austerity’, and added: ‘I’m not sure he’s going to compromise the chance to have a Labour government for that issue.’ 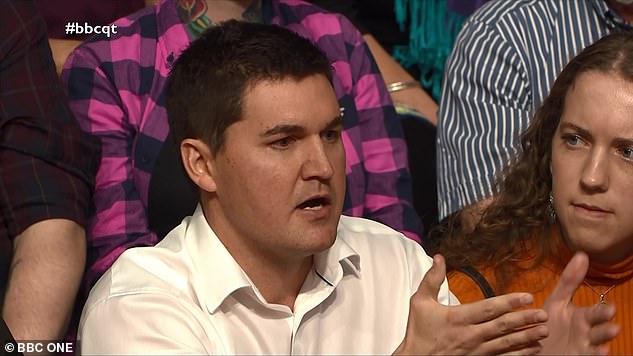 Another audience member challenged Corbyn over his record on anti-Semitism. He said that the actions of the Labour leader have ‘terrified’ him

Liberal Democrat leader Jo Swinson was challenged over her role in austerity in coalition with the Tories and accused of treating voters as ‘stupid’ over her plans to revoke Article 50 and cancel Brexit without another referendum.

Ms Swinson said: ‘I don’t think you can accuse us of not being upfront about wanting to stop Brexit. We’ve been crystal clear about that from the very beginning.

‘Not for one second do I think that means that you or anybody like you is stupid. I think it means we disagree.’

The debate was to be closed by Conservative Prime Minister Boris Johnson.