The $268 million redevelopment of the Queen Victoria Market is expected to bring in $1 billion in economic benefits according to a new business case for the precinct.

The City of Melbourne released its business case for the redevelopment of the market on Thursday which it said would create nearly 15,000 new jobs and attract 18 million visitors a year. But community groups and some traders remain opposed to the plans, with one saying it will sanitise the market, turning it into “a supermarket but outdoors”. 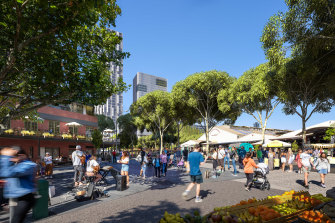 The proposed Queen Victoria Market redevelopment is expected to boost visitor numbers to 18 million a year.

The business case prepared by SGS Economics & Planning said the redevelopment would return Queen Victoria Market to profitability from 2025, with annual profits increasing to $5 million by 2030 and $10 million by 2050.

Last year the Queen Victoria Market made a loss of $1.7 million as pandemic restrictions saw visitor numbers drop by 39 per cent to 4.8 million visitors for the year.

“It tells us that every dollar invested creates $4.13 of benefits across the market and across the broader community because we are investing in public infrastructure like the new open space called Market Square Park,” she said.

Cr Capp said the redevelopment was “fundamental to the future of the market”.

Rosa Ansaldo has been selling fruit and vegetables at Queen Victoria Market for 35 years at Rospaul Fruiterers and said traders were not being listened to in the redevelopment process, with newly installed skylights on the sheds causing produce to dehydrate. 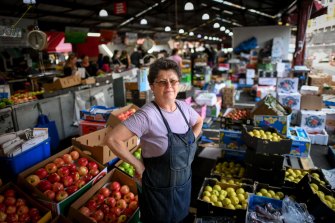 Rosa Ansaldo has traded at the Queen Victoria Market for 35 years. Credit:Eddie Jim

“I believe you will lose the whole spirit and the actual iconic meaning of the market, the authenticity of the traders, it’ll be all pristine they want everything the same looking,” she said. “It will be like a supermarket but outdoors.”

Ms Ansaldo said some redevelopment was necessary, but traders needed to be consulted more parking was included, not less.

“We needed a facelift because they spent no money on it for 30 years,” she said. “They’ve saved a lot of money by not doing anything.”

Community group the Friends of Queen Victoria Market is also concerned about the redevelopment. 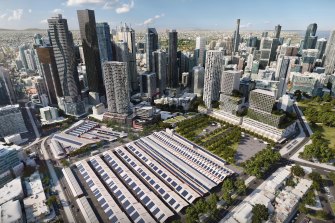 An artist’s impression of the proposed Queen Victoria Market redevelopment.

President Mary-Lou Howie said construction was killing the market with high-rise buildings set to overshadow the market and people would not come back.

“The market is done for and they are making a white elephant,” she said. “Their intention is to create a City of Melbourne events space not a heritage market that Melbourne loves.”

Ms Howie called for a stop to the redevelopment and broader consultation with traders rather than the “sham consultation” that she said had occurred.

“They are homogenising the place, sanitising the place all under the guise of occupational health and safety,” she said. “People like the market the way it is, markets evolve we are not against change, but as long as you take people with you. Morale has never been so low among traders and we are losing traders all the time.”

However Cr Capp said the business plan should calm concerns about the redevelopment.

“I think the controversy has really died down as we’ve started delivering a number of the pieces of the puzzle,” she said. “I think this [business plan] further provides rigour and confirmation, economic rigour, and an economic business case to say that the investment is really worthwhile, that the numbers make sense.”

The City of Melbourne will consider the business case and redevelopment plan at a meeting on Tuesday night.