The return of furlough? Businesses, pubs and restaurants will get more funding if further lockdown imposed as furious bosses warn they are facing ‘lockdown by stealth’ and say cancellations could hit festive takings by 40%

Businesses could receive new state support, including a potential return to furlough, if Boris Johnson orders pubs, bars and restaurants to close – as industry leaders slammed ‘lockdown by stealth’ and said Plan B risks slashing festive takings by 40%.

The Government has already come under pressure to increase the support it is providing to hospitality businesses after some saw festive bookings ‘disappear overnight’ after the introduction of ‘Plan B’ restrictions to tackle Omicron.

Chancellor Rishi Sunak is prepared to loosen the money taps again if ministers decide closures are necessary, according to a Treasury source, although they insisted this does not mean further restrictions were now more likely. 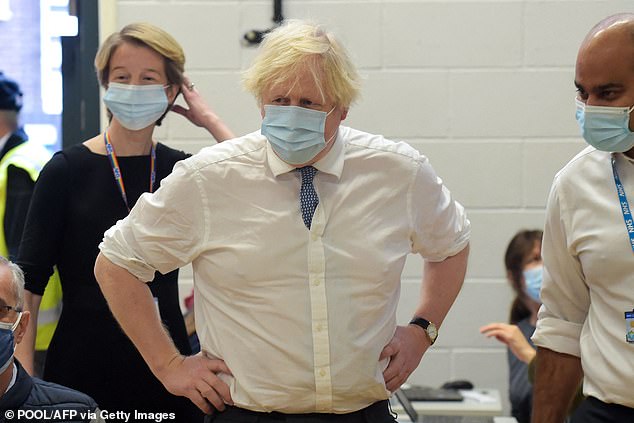 ‘If we do get to a position where we are telling businesses that they have to shut their doors then it is not unreasonable for them to expect additional government support,’ the source told The Times.

‘That could mean a return to the furlough scheme but depending on what, if any, further restrictions are necessary there might be other ways of providing that support.’

Wetherspoon chairman Tim Martin and CBI chief Tony Danker are among business leaders suggesting ministers are pursuing ‘lockdown by stealth’ at a time when the threat posed by Omicron had still not been established.

Mr Danker said the current messages from the Government have had a ‘chilling effect’ on certain sectors of the economy.

He told BBC Radio 4’s Today programme: ‘It seems to us that whilst we have measures to keep the economy open, we have messages that have ended up closing much of it down.

‘People should be worried enough to go and get a booster urgently, but not so worried to stop going to shops, restaurants or airports. 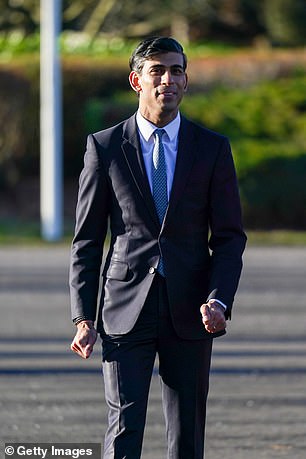 Chancellor Rishi Sunak is prepared to loosen the money taps again if ministers decide closures are necessary, according to a Treasury source

‘That’s what’s not working, you have a double whammy for businesses in those sectors, hospitality, retail, leisure or travel, where demand is collapsing and there’s no support to recover.

‘So, whilst we all support the booster campaign, and I urge all employees to get their booster, the unintended consequence has been a really rather chilling effect on demand in a lot of sectors in our economy.’

Christmas is the most lucrative time of the year for pubs and restaurants, but trade body UK Hospitality forecasts that takings will be down as much as 40% in parts of central London.

Data it released from Monday to Sunday of last week showed a 13% drop in trade and a 15% increase in cancellations across the country when compared with pre-pandemic levels, the Guardian reported.

The Prime Minister refused to rule out further restrictions before Christmas yesterday as Sajid Javid warned that those who fail to get boosted will lose their ‘fully vaccinated’ status.

In a tightening of the rules, the Health Secretary said those with just two jabs would find it harder to travel abroad and access certain UK venues.

Sources said the change was likely to come into force in February.

The move came as Mr Johnson repeatedly refused to rule out a further tightening of restrictions in the next ten days. 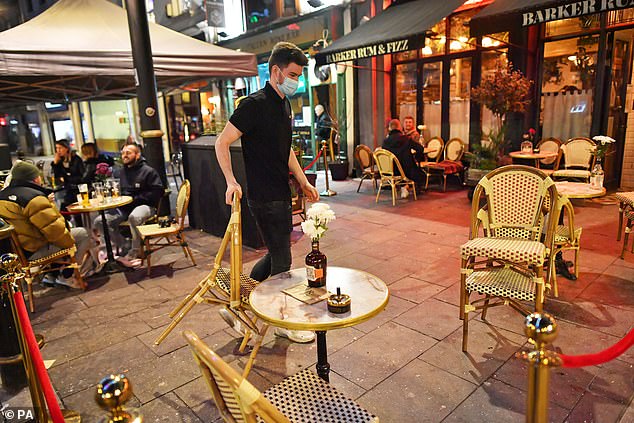 Christmas is the most lucrative time of the year for pubs and restaurants, but trade body UK Hospitality forecasts that takings will be down as much as 40%. File pic

Speaking to reporters yesterday, he said he hoped that Plan B measures, such as increased mask wearing and working from home, would be enough to keep the virus at bay.

But he refused three times to rule out imposing tougher measures before Christmas if Omicron proves to be more dangerous.

Up to 79 Tories could revolt over Plan B

By Harriet Line, Chief Political Correspondent for the Daily Mail

Boris Johnson faces the biggest revolt of his premiership today as a third of Tory backbenchers prepare to rebel against his Plan B vaccine passport measures.

As many as 79 Conservative MPs – equivalent to the Government’s working majority – are ready to vote against plans that will mean the NHS Covid pass is required for entry at larger venues.

Downing Street suggested that hospitality venues could be forced to close without vaccine passports.

But critical MPs claim the ‘illiberal’ measures, set to come into force from tomorrow, will not work.

Several ministerial aides are on resignation watch. Such a large rebellion will be a major blow to the Prime Minister but he will escape an embarrassing defeat as Labour has said it will back the measures.

Yesterday one leading rebel, Tory MP Marcus Fysh, sparked a furious row by likening their introduction to the policies pursued in Nazi Germany. ‘This is not Nazi Germany,’ he told the BBC. ‘It’s the thin end of an authoritarian wedge and that’s why we will resist it.’

The Board of Deputies of British Jews said his remarks were ‘completely unacceptable’.

These include requiring people to ‘check in’ at pubs and restaurants with the NHS Covid app, extending mask use to the hospitality sector and increasing the venues required to operate Covid passport entry schemes.

One Whitehall source said officials had also dusted off measures used during the last lockdown, such as reintroducing table service and even requiring people to sit outside. But this was denied by No 10. The PM’s official spokesman said: ‘There are no plans to go beyond what we have set out’.

The spokesman acknowledged that ‘in extremis’ the Government could even tighten curbs during the parliamentary recess which starts on Thursday night, but said this was not under consideration.

Some ministers believe that further restrictions are inevitable, but hope to delay them until after Christmas.

A source said: ‘Everyone wants to give people the chance of a decent Christmas and then we will see where we are. That may result in a slightly more restricted January.’

Yesterday, the PM said: ‘Throughout the pandemic I’ve been at great pains to stress to the public that we have to watch where the pandemic is going and we take whatever steps are necessary to protect public health.’

He added: ‘What I can tell you is that we think that looking at the balance of the risks, looking at the epidemiology, looking at where we are with Omicron, looking at everything we know, there are still some important things we don’t know about Omicron.

‘We think that this is the best approach: combination of a Plan B, which is some sensible steps to slow the spread of the virus to buy us some time to help to reduce the infections and of course the mortality rate, and then combine that with rapidly building up our booster defences.’

The NHS Covid pass is widely used for foreign travel and will also be central to the vaccine passport scheme.

Until now, the scheme is open to all adults who are double-jabbed.

But, with evidence mounting that two jabs are not enough to prevent infection with Omicron, this is now set to change.

Mr Javid: ‘Once all adults have had a reasonable chance to get their booster jabs we intend to change this exemption to require a booster dose.’