Protesters have blocked the entrance to the hospital where the two Los Angeles sheriff’s deputies ambushed in a shooting Saturday are fighting for their lives, chanting: ‘We hope they f***ing die.’

The officers, one the 31-year-old mother of a six-year-old boy, were shot at the Metro Blue Line station at Willowbrook Avenue and Oak Street in Compton by a male suspect who then fled the scene.

Donald Trump on Sunday said the man who opened fire should face a ‘fast trial death penalty’ if the deputies die. He earlier called the shooter an ‘animal’ who needed to be ‘hit hard’ as the FBI was called in to help investigate.

The president tweeted: ‘If they die, fast trial death penalty for the killer. Only way to stop this!’ He had rewarded his son Donald Jr. who shared the footage, writing: ‘Please pray for these two Sheriff Deputies. Their lives matter!!! #BlueLivesMatter.’

Joe Biden said: ‘This cold-blooded shooting is unconscionable and the perpetrator must be brought to justice. Violence of any kind is wrong; those who commit it should be caught and punished. Jill and I are keeping the deputies and their loved ones in our hearts and praying for a full recovery.’

Kamala Harris added: ‘Doug and I are keeping the two Los Angeles County Sheriff’s deputies in our hearts as they currently fight for their lives after a horrific attack last night. The perpetrator must be brought to justice.’

Shameful footage said to have been taken outside St. Francis Medical Center in Lynwood on Saturday night shows as one protester yells: ‘I want to deliver a message to the family of the pigs, I hope they f***ing die.’ The protesters had been connected to the Black Lives Matter movement on Twitter but that has not been officially confirmed.

Another demonstrator tells police: ‘Y’all gonna die one by one. This ain’t gonna stop.’

On Sunday the LA county sheriffs office tweeted: ‘To the protesters blocking the entrance & exit of the HOSPITAL EMERGENCY ROOM yelling ‘We hope they die’ referring to 2 LA Sheriff’s ambushed today in #Compton: DO NOT BLOCK EMERGENCY ENTRIES & EXITS TO THE HOSPITAL.

‘People’s lives are at stake when ambulances can’t get through.’

Police on Sunday were still hunting the shooter, offering a $100,000 reward. They said: ‘The suspect is described as a male Black 28-30 years-old, wearing dark clothing.’ He was last seen in a black, four door sedan, cops said. 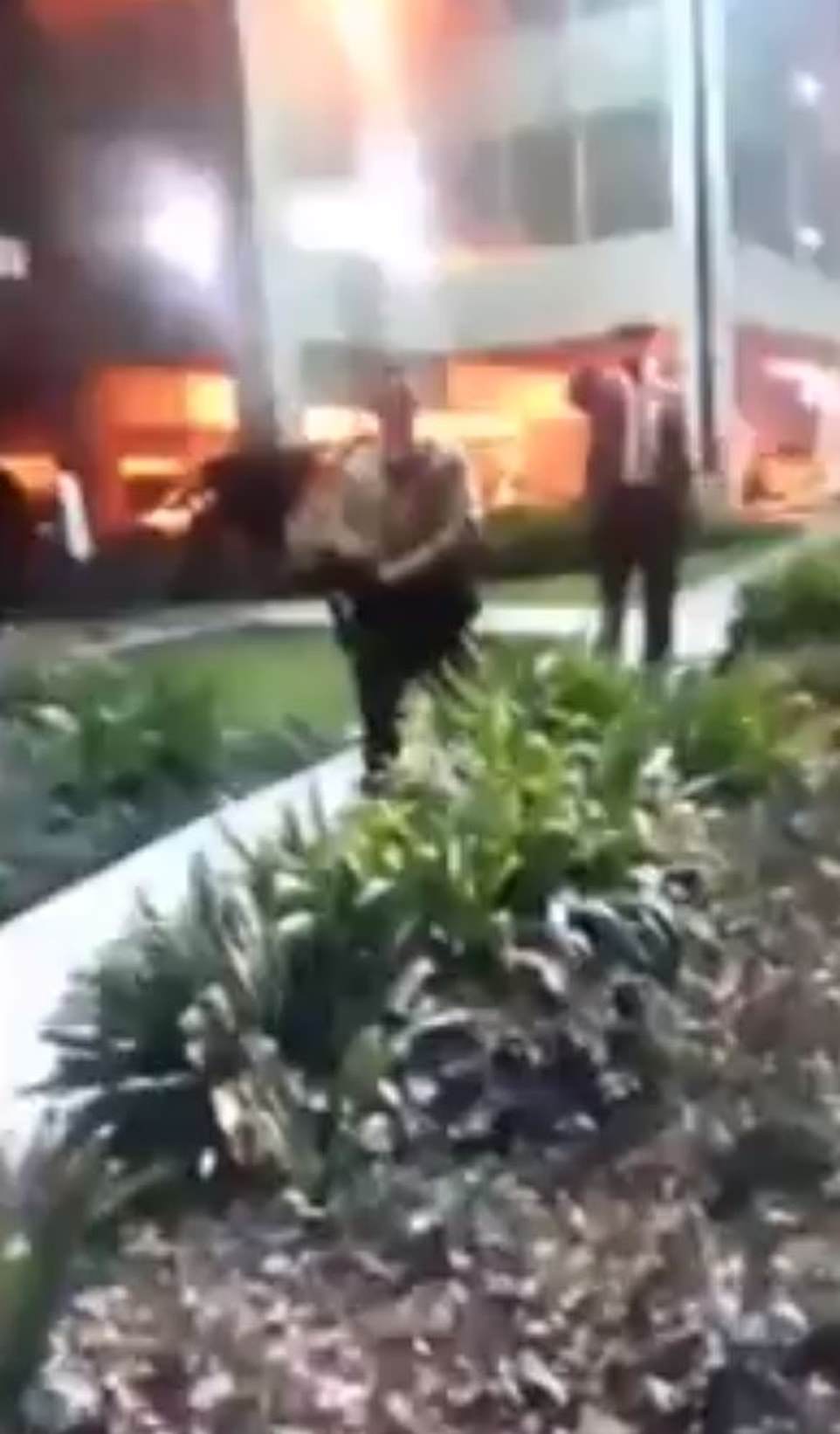 Protesters have blocked the entrance to the hospital where the two Los Angeles sheriff’s deputies ambushed in a shooting Saturday are fighting for their lives, chanting: ‘We hope they f***ing die’ 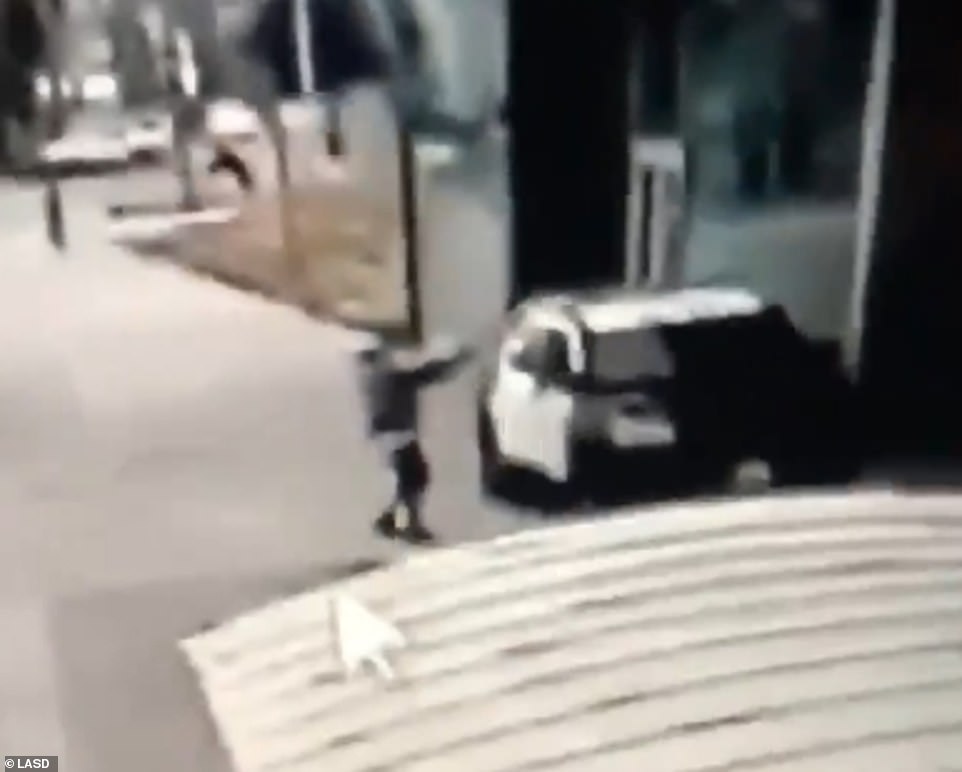 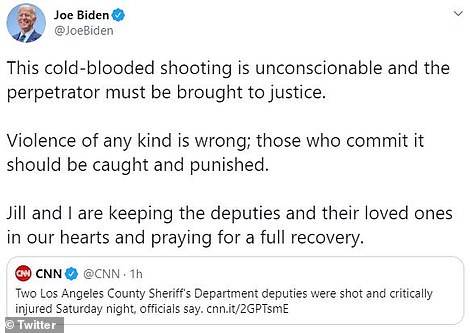 One local faith leader had told KABC: ‘They were saying ‘Death to the police’ and ‘Kill the police,’ and these are sheriffs, but the message is still the same. They were using all types of curse words and derogatory terms. Unacceptable behavior, because a hospital should be a sanctuary.’

A radio reporter who was near the protest scene was taken into custody, KABC-TV reported. The sheriff’s department later tweeted that the reporter interfered with the arrest of a male protester.

Police later added: ‘After deputies issued a dispersal order for the unlawful assembly of a group of protesters blocking the hospital emergency entrance & exits, a male adult protester refused to comply & cooperate…

‘During his arrest, a struggle ensued at which time a female adult ran towards the deputies, ignored repeated commands to stay back as they struggled with the male and interfered with the arrest…

‘The female adult, who was later identified as a member of the press, did not identify herself as press and later admitted she did not have proper press credentials on her person. Both individuals have been arrested for 148 P.C.’

Video released by the sheriff’s department Saturday shows the suspect walking up to the car and immediately opening fire on the male and female officers before running off.

‘The gunman walked up on the deputies and opened fire without warning or provocation,’ the department said in a post.

Both deputies sustained multiple gunshot wounds and are in critical condition, according to the department’s Twitter account.

One has been described as a married 31-year-old mother of a six-year-old boy. The other deputy is a 24-year-old male.

Both graduated from the academy 14 months ago. Neither have been officially named.

During the press conference, Sheriff Villanueva said that the two deputies initiated radio contact after they were shot. They were transported with the assistance of other deputies,’ he shared.

‘That was a cowardly act,’ Villanueva added.

‘The two deputies were doing their job, minding their own business, watching out for the safety of the people on the train.’

‘Seeing somebody just walk up and start shooting on them. It p***es me off. It dismays me at the same time. There’s no pretty way to say it.’

Footage of the protesters surrounding the hospital where they are being treated sparked outrage online.

@themetskipper wrote: ‘This is the result of the anti police narrative.’

Capt. Kent Wegner said: ‘He walked along the passenger side of the car. He acted as if he was going to walk past the car and then he made a left turn directly toward the car, raised a pistol and fired several rounds inside of the vehicle, striking both of the sheriff’s deputies.’ 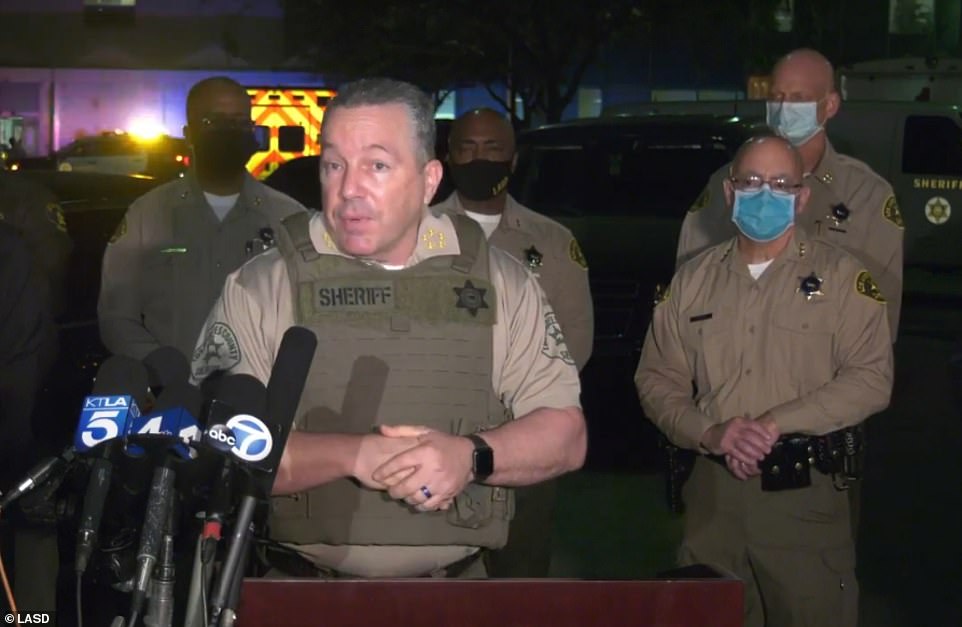 During the press conference, Sheriff Villanueva said that the two deputies initiated radio contact after they were shot 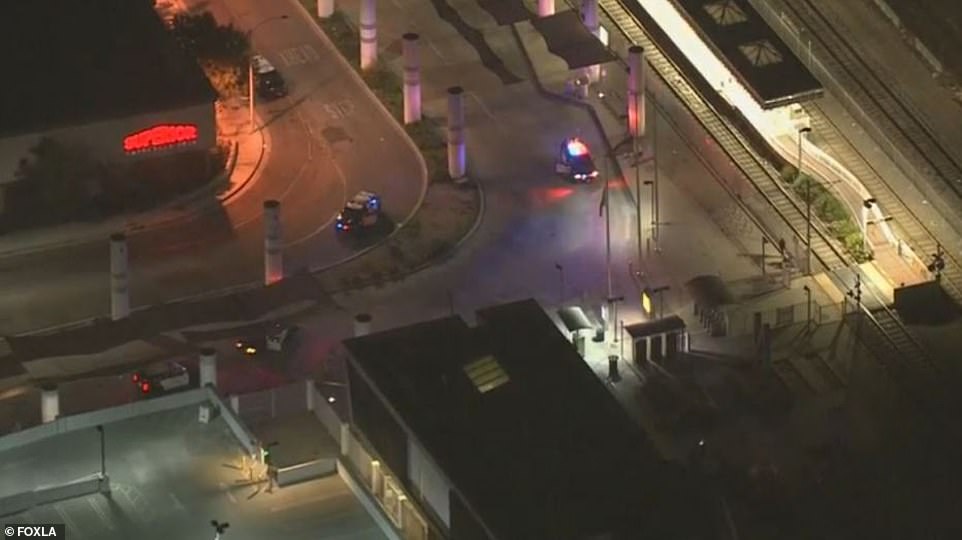 The two deputies, a male and female officer with the Transit Services Bureau, have undergone surgery

‘Moments ago, 2 of our Sheriff Deputies were shot in Compton and were transported to a local hospital,’ the department said in a Saturday night Twitter post.

‘They are both still fighting for their lives, so please keep them in your thoughts and prayers.

We will update this thread with information as it becomes available.’

The FBI has shared that they are now assisting in the search for the gunman.

‘FBI Los Angeles has offered resources and stands ready to assist in response to reports of an attack on @lasdhq deputies tonight,’ FBI Los Angeles said on Twitter.

Capt. Wegener said officers were blanketing the area in search of the suspect seen on the video opening fire with a pistol.

‘We have a very, very generic description,’ he said.

LAPD Chief Michael Moore tweeted: ‘Tonight we pray for these two guardians to survive. I recognize and acknowledge we live in troubled times. But we must as a community work thru our differences while loudly and resoundly condemn violence. Blessed are the Peacemakers.’

Kiwis may be able to travel to some Australian states before Christmas: Ardern