82F and not a drop of sweat in sight: Prince Andrew – who claimed he couldn’t perspire in now-infamous Newsnight interview – enjoys a horse ride at Windsor Castle as he still faces calls to speak to FBI about friend Jeffrey Epstein

The Duke of York infamously dismissed some of the allegations made against him by Virginia Giuffre in his disastrous Newsnight interview last year by claiming he couldn’t sweat due to a medical condition – she previously claimed he was ‘profusely sweating’ when they had sex.

But Andrew, who has denied any sexual contact with Ms Guiffre, was clearly feeling the 82F heat this morning as he left two buttons undone on his dark navy blue shirt, and rolled his sleeves up while galloping through the picturesque royal grounds with an unnamed companion.

The duke, who retired from royal duties in November after the catastrophic BBC grilling from Emily Maitlis, is under pressure to cooperate with the FBI’s probe into Epstein. Andrew has always claimed he would be happy to cooperate with any US investigation into depraved child abuser Epstein, who was Andrew’s friend.

It comes as pictures have emerged of the duke’s friend Ghislaine Maxwell play-fighting with Jean-Luc Brunel, who is accused of sex offences, on Epstein’s paedophile island. 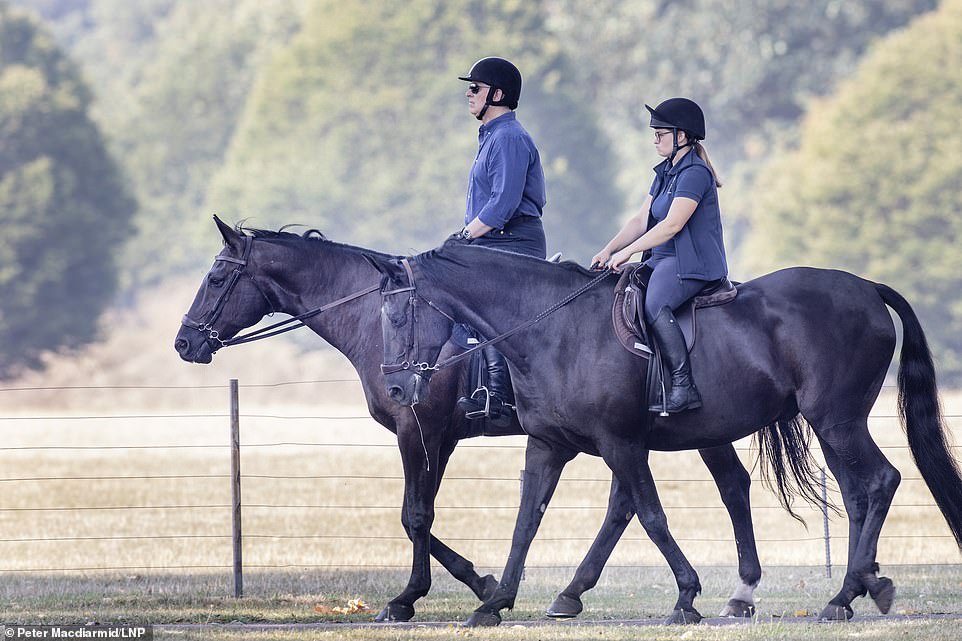 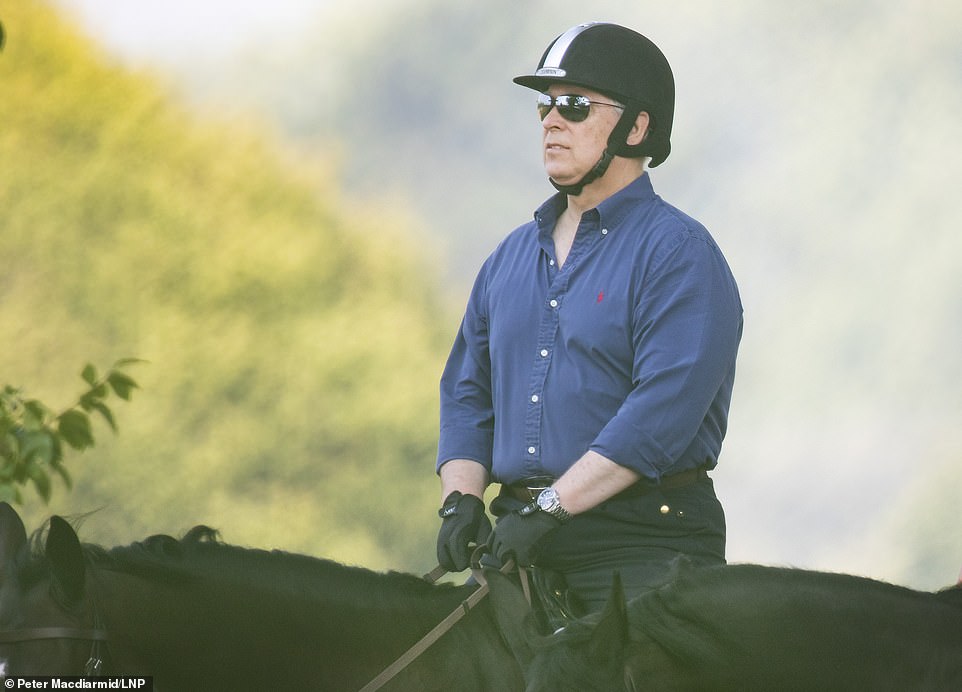 The photos were taken by an island visitor in 2003, at a time when Epstein was at the height of his financial powers and had not yet been publicly accused of sex abuse.

Brunel, despite already facing a slew of sex assault allegations, was the head of prestigious modelling agency MC2, and Maxwell was enjoying the high-life as the billionaire financier’s ‘best friend’ and ‘aggressive assistant’.

It has been alleged in court documents that Brunel once had three 12-year-old girls flown in from France for Epstein to abuse as a sadistic birthday present.

Epstein is now dead, found unconscious in his Manhattan jail cell last year at the age of 66 while awaiting trial for sex crimes in what was ruled a suicide.

Maxwell, 58, is in jail in Brooklyn, accused of procuring young girls for Epstein to abuse. She is under constant surveillance in case she tries to harm herself before the case can come to trial. 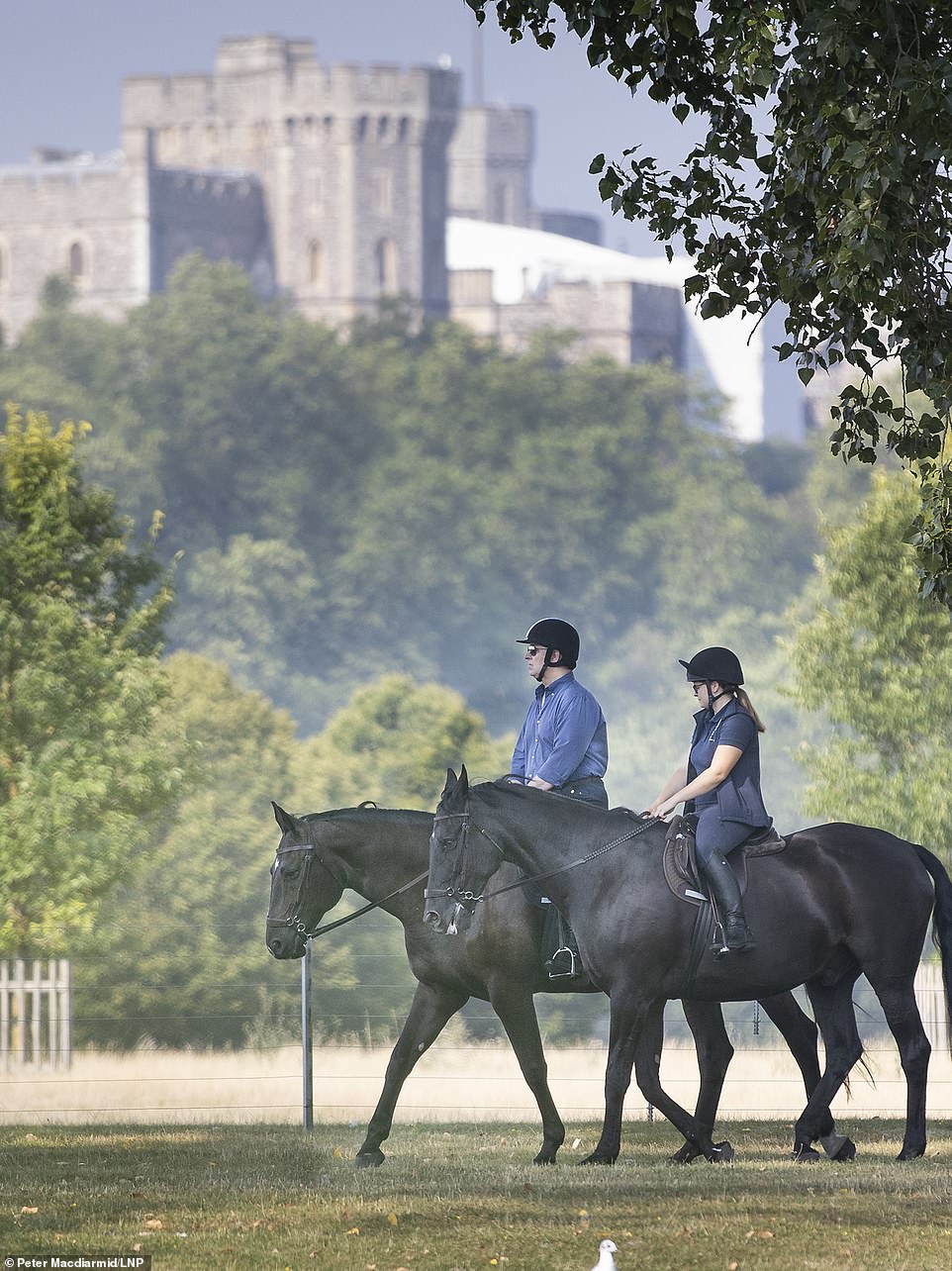 Andrew was clearly feeling the 82F heat this morning as he left two buttons undone on his dark navy blue shirt, and rolled his sleeves up while galloping through the picturesque royal grounds with an unnamed companion 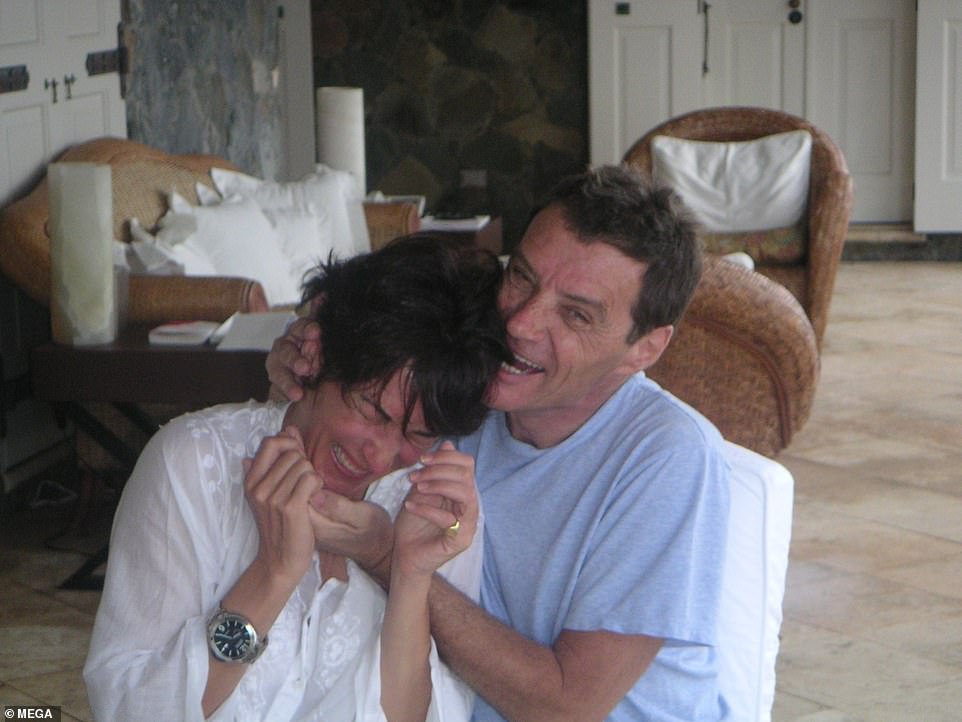 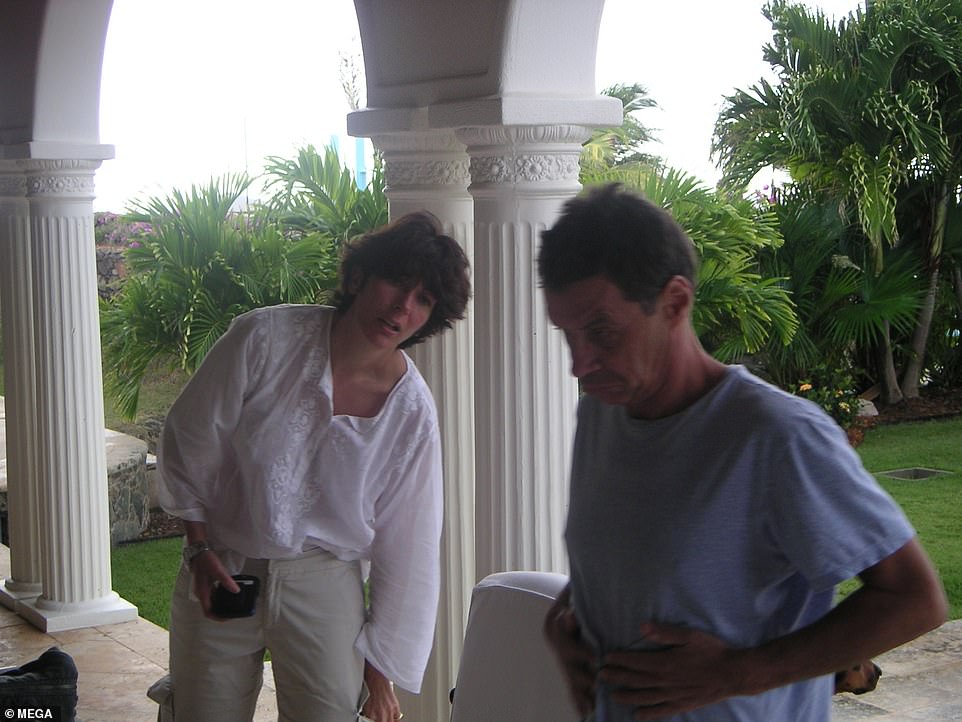 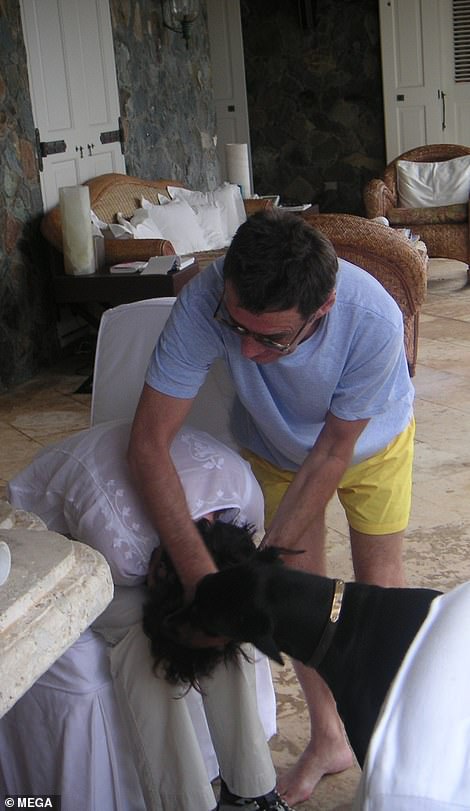 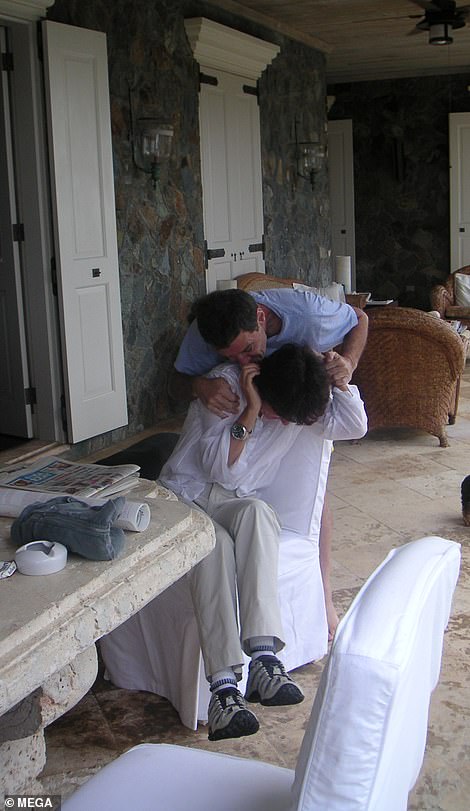 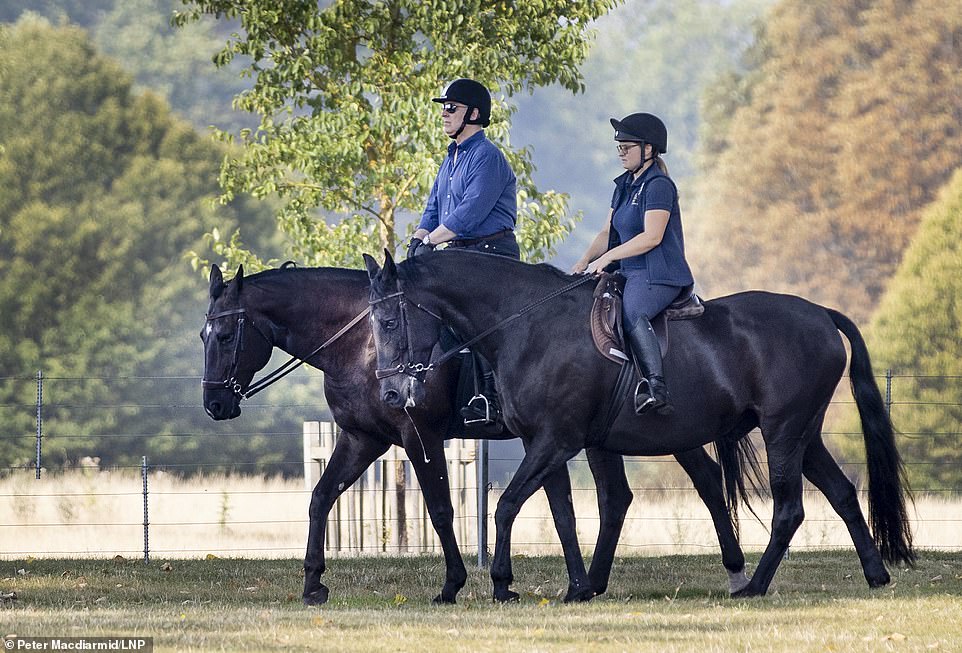 Prince Andrew, wearing mirrored sunglasses, enjoying his ride this morning with an unnamed companion in Windsor

Jean-Luc, 74, is believed to be hiding somewhere in South America, having vanished shortly after Epstein died.

But there is no hint of their fates in the photographs, which show Maxwell eating dinner from a platter while Jean-Luc smokes a cigarette nearby.

A person who witnessed the photos being taken told The Sun: ‘Ghislaine and Jean-Luc were very close friends.

‘On this occasion, she had just returned from the gym and was eating when Jean-Luc suddenly grabbed her.

‘I used to call Ghislaine the Wicked Witch of the West. She’s a bad, bad lady.’

Virginia Roberts, Epstein’s main accuser, told lawyers that many young girls – too many to count – participated in sex sessions with both Maxwell and Epstein all over the island.

She also alleges that high-profile visitors, including Bill Clinton, came to the island, where he spent time with ‘two young girls from New York’. 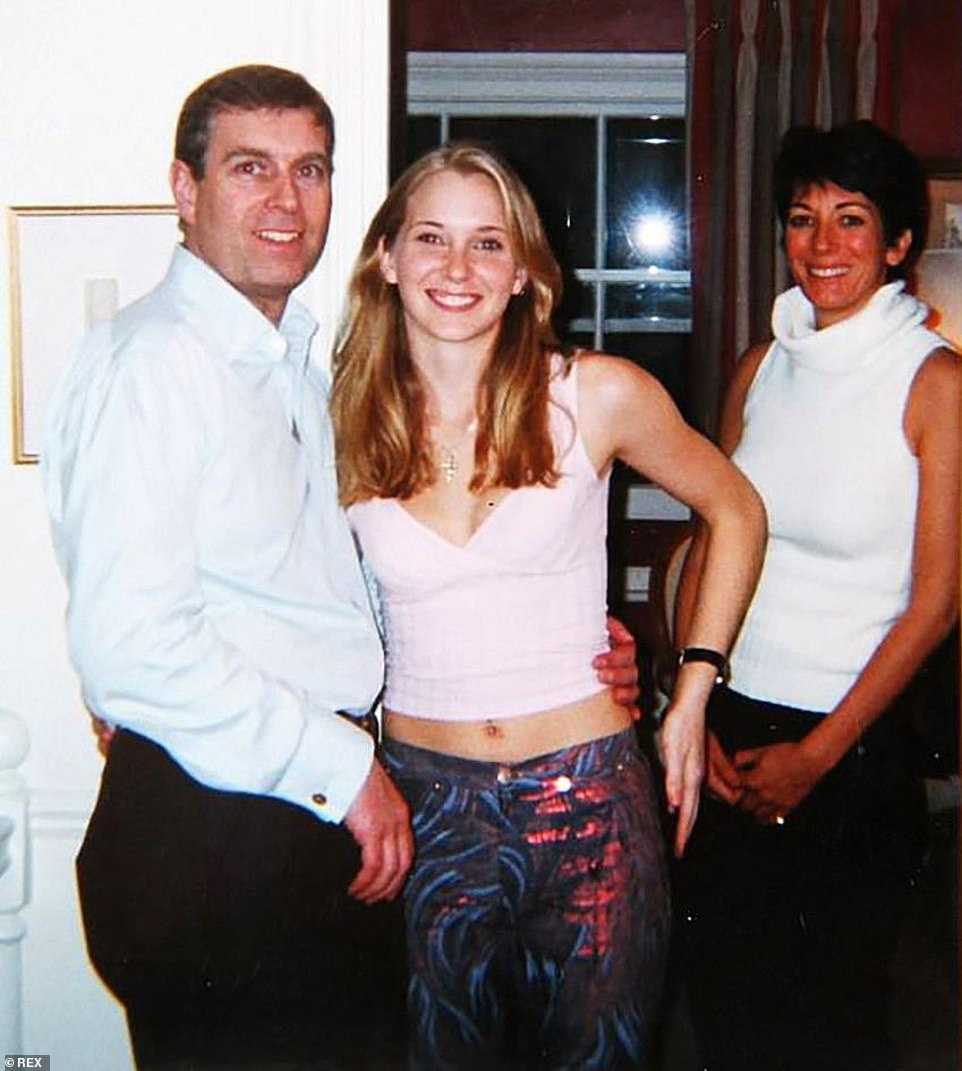 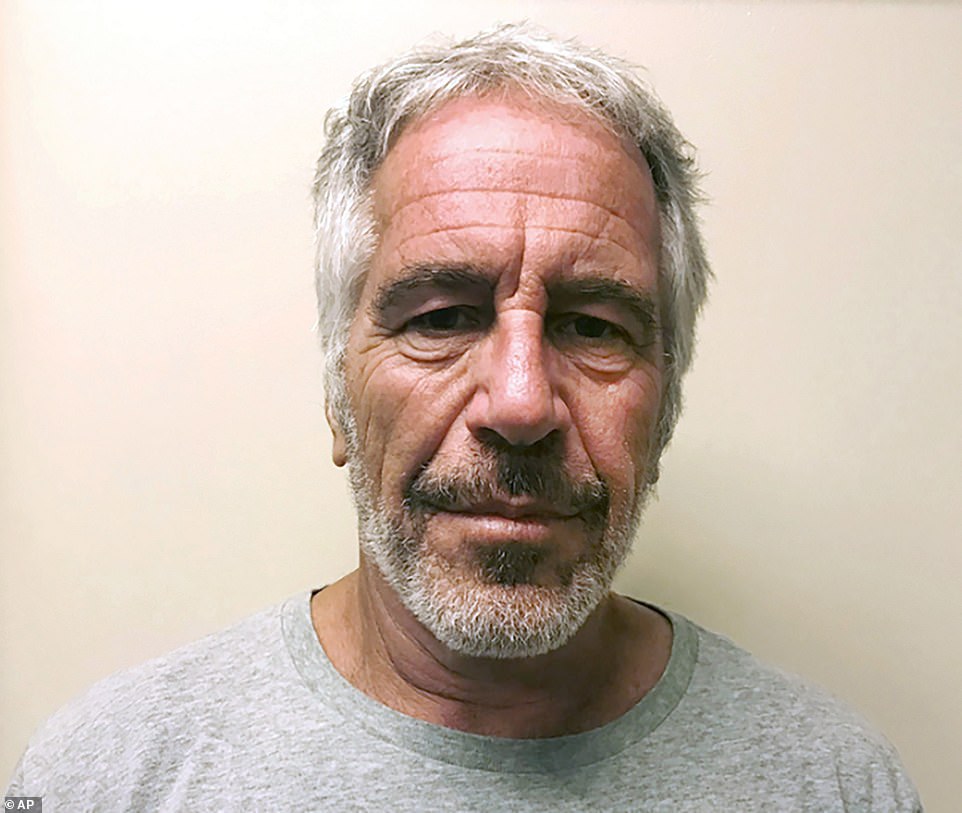 Andrew was friend’s with Jeffrey Epstein, a convicted paedophile, who killed himself last year

Clinton, who by the time of his alleged visit had left his post as president, denies ever being there.

Meanwhile Jean-Luc, who faces allegations of sex assault separate to Epstein that date back until 1988, was once described as Epstein’s closest male friend.

Epstein bankrolled Jean-Luc’s modelling agency, and in return the scout allegedly supplied him with a string of young women to abuse.

Jean-Luc, who is also facing an investigation in France, strongly denied the claims before vanishing last year, shortly after Epstein died.

According to La Parisien he has since be traced to South America, though it is unclear exactly where he is hiding.

Maxwell is facing up to 35 years in jail if she is found guilty of sex crimes charges and perjury, for allegedly lying under oath in depositions she gave to a previous case.

She has pleaded not guilty, and her trial is set to take place next year.

In the meantime she is being held in Brooklyn’s Metropolitan Detention Center, described as one of America’s most-troubled prisons by a former warden.

Maxwell, daughter of disgraced press baron Robert Maxwell, was being kept on suicide watch for a time but has now been taken off it.

However, her lawyers say she is being kept under constant surveillance and is woken every few hours during the night to make sure she doesn’t harm herself.

Her lawyers have requested that the searches and surveillance be stopped, and that she be be taken out of solitary confinement and placed in with other prisoners.

Her legal team say she is only being subjected to the ‘onerous’ conditions because of what happened to Epstein, and not because of any genuine risk she poses.