London: Former Pope Benedict has asked for his name to be removed as the co-author of a controversial new book that threatened to undermine his successor over the highly sensitive issue of celibacy.

Breaking his pledge to remain "hidden from the world" following his retirement in 2013, Benedict joined forces with a senior cardinal to release a book this week on priestly celibacy, just as Pope Francis considers whether to allow the ordination of married men to help alleviate a shortage of priests in South America. 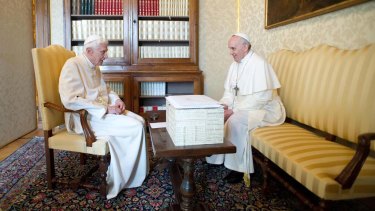 Benedict's intervention is extraordinary, given he had promised to remain "hidden from the world" after stepping down in 2013 and pledged his obedience to the new Pope. He has largely held to that pledge, though he penned an odd essay last year on the sexual abuse scandal and blamed the crisis on the sexual revolution of the 1960s.

Francis has expressed sympathy with the Amazonian plight.

What happened to Daniel Lewis Lee’s eye and was he blind? – The Sun

An investigation into the Tether stable currency is presently underway following a request granted by an appeals court to the New York Attorney General’s office....