Coronaphobia lingers: Poll finds a fifth of Britons are NOT planning a normal Christmas and a third are expecting a new lockdown to be in place

Almost one in five Brits are not planning normal Christmas and New Year’s celebrations amid lingering fears over the coronavirus crisis, according to a new poll.

An exclusive survey conducted by Redfield & Wilton Strategies for MailOnline found the majority of people – 81 per cent – do intend to go ahead with normal celebrations but 19 per cent said they do not.

Meanwhile, the nation is split on whether the Government could impose new coronavirus rules which would disrupt festive gatherings.

Some 48 per cent of people expect there will not be any coronavirus restrictions preventing normal Christmas gatherings this year.

But almost a third – 31 per cent – expect that there will be such restrictions put in place while 20 per cent said they did not know. 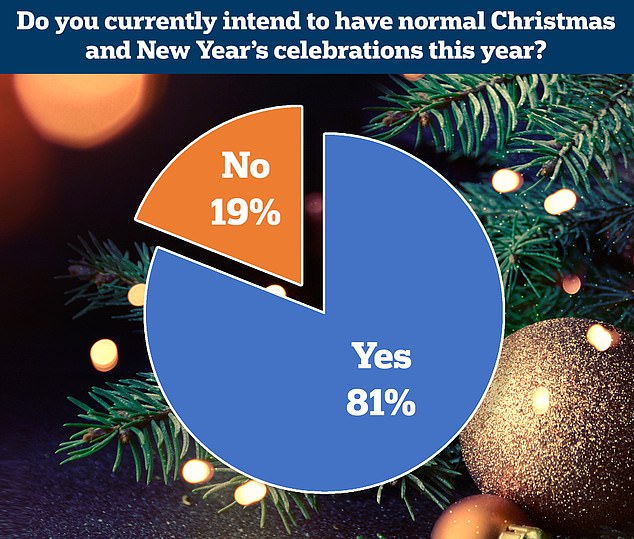 Almost one in five Brits are not planning normal Christmas and New Year’s celebrations amid lingering fears over the coronavirus crisis, according to a new poll

The poll findings come after Boris Johnson said earlier this week that he could not rule out a lockdown over the Christmas period.

The Prime Minister said that while the data did not show, at the moment, that any additional measures were needed, he could not give a guarantee for the coming weeks and months.

Mr Johnson told a Downing Street press conference: ‘Clearly we cannot rule anything out and the most important thing people can do to prevent further NPIs from being taken is to – non-pharmaceutical interventions that is, further restrictions – get the boosters.’

The PM warned there were ‘storm clouds’ gathering over parts of Europe with a ‘new wave’ of the virus sweeping across the continent.

‘We don’t yet know the extent to which this new wave will sweep up on our shores but history shows that we cannot afford to be complacent,’ he said. 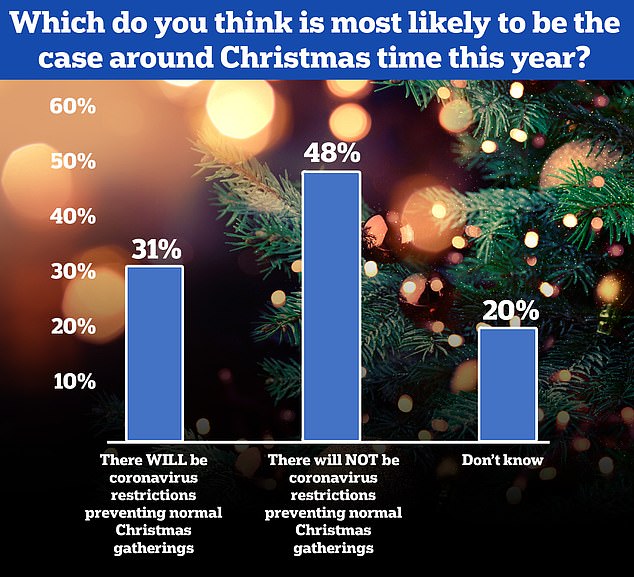 Meanwhile, the nation is split on whether the Government could impose new coronavirus rules which would disrupt festive gatherings

‘It shows us that if we want to control the epidemic here in the UK and if we want to avoid restrictions on our daily lives we must all get vaccinated as soon as we are eligible.’

The Government announced on Monday that adults aged over 40 will be invited to receive booster jabs in the coming weeks.

Mr Johnson added: ‘It would be an utter tragedy if, after everything we have been through, people who had done the right thing by getting double vaccinated ended up becoming seriously ill or even losing their lives because they allowed their immunity to wane.’

Onston and 2Y entertainment agency will be joining efforts, resources, and initiatives together to better develop the NFT space as the companies revealed they had...

The head of an expert group advising the Covid response says all the systems are in place to manage Delta cases all over the country...