He’s with the anglers now! Giant 53lb monster pike that would have broken 28-year-old British record is found dead at fishery in Yorkshire

A huge pike that would have been the biggest ever in Britain has been found dead when anglers returned to a lake in North Yorkshire after lockdown.

The monster fish, which had recently died of natural causes at a fishery, weighed a mighty 53lb 2oz.

That is over 6lb heavier than the coveted British pike record of 46lb 13oz that has stood for 28 years. 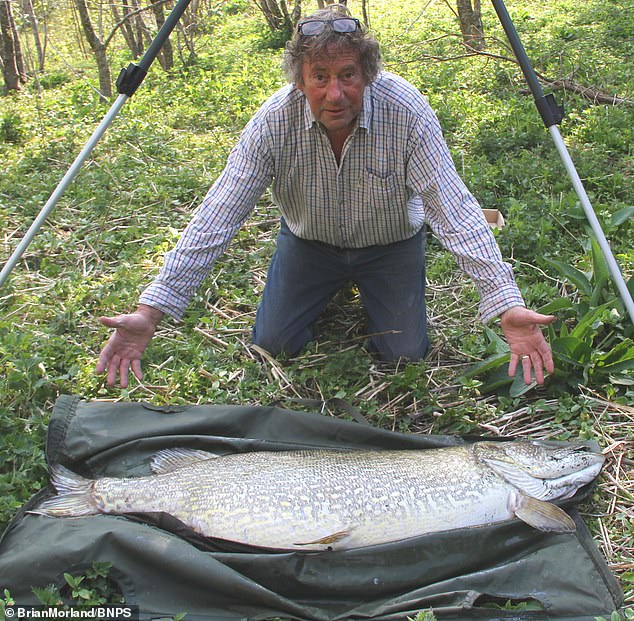 A huge pike that would have been the biggest ever in Britain has been found dead when anglers returned to a lake in North Yorkshire after lockdown. It was found by fishery owner Brian Morland (above) while walking his dog along the banks of Bellflask Fishery near Ripon 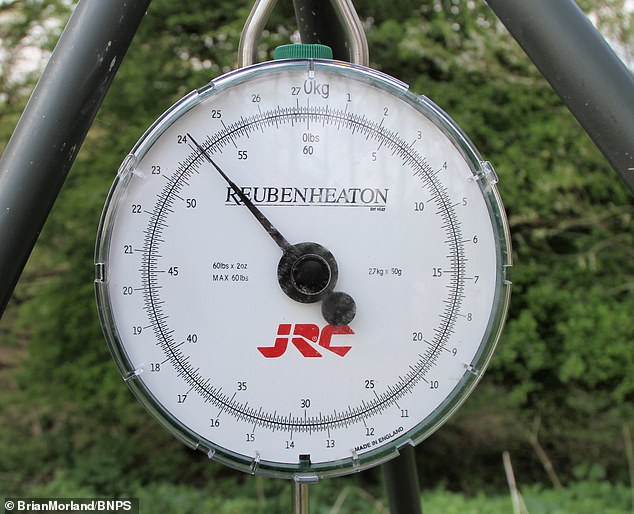 The monster fish, which had recently died of natural causes, weighed a mighty 53lb 2oz. That is over 6lb heavier than the coveted British pike record of 46lb 13oz that has stood for 28 years

It is thought the specimen was previously unknown to the angling world.

The pike was found by fishery owner Brian Morland while he was walking his dog along the banks of his Bellflask Fishery near Ripon.

Mr Morland believed the fish had suffered from spawning stress which was the cause of its demise.

When spawning, fish move into shallow water and do not seek relief in deeper, cooler water when they become stressed – as their main focus is on spawning – and the result can be fatal.

He estimated the 4ft long monster was aged around 11 years old.

Mr Morland said: ‘The lake has always produced some very large pike because the water quality is excellent and the aquatic life is prolific, providing plenty of food.

‘Every year we lose one or two of the big pike in the lake due to spawning stress. It is the end of their natural lifespan.

‘However, this fish was far bigger than most so we weighed it very carefully using highly accurate scales suspended from a sturdy tripod.

Pike: The apex predator of freshwater lakes… with 700 teeth

Pike – Esox lucius in Latin – are at the top of the food chain in freshwater lakes and rivers and their main prey is roach, perch and trout.

They have up to 700 teeth, some of which point backwards to stop any prey from escaping once they have clamped their jaws shut.

They can grow to 5ft in length and have been known to live for more than 20 years.

‘We also took a lot of photographs. The fish was over 6lb heavier than the UK rod-caught record pike. From its scale readings, we think the fish was 10 to 11 years old.

‘The reason it reached its weight was partly genetics, partly environment and partly a good food supply. It would have been lovely to have caught a pike of this size but I do feel privileged to have clapped eyes on a 53lb pike.’

The official British pike record is held by Roy Lewis who caught a 46lb 13oz specimen at the Llandegfedd Reservoir in South Wales in 1992.

Last year, Czech angler Lukas Matejka broke the coveted world record that has stood for 33 years after netting the monster that weighed a whopping 58lb 14oz.

John Currie from the Pike Anglers Club of Great Britain said the discovery will give anglers a boost that a record-breaking fish could be out there.

He said: ‘It’s certainly a massive fish but it had never been caught and wasn’t weighed while it was alive and there’s a chance it might have taken on some water.

‘But for fishermen, it helps cement that thought that you never know what’s around the corner. 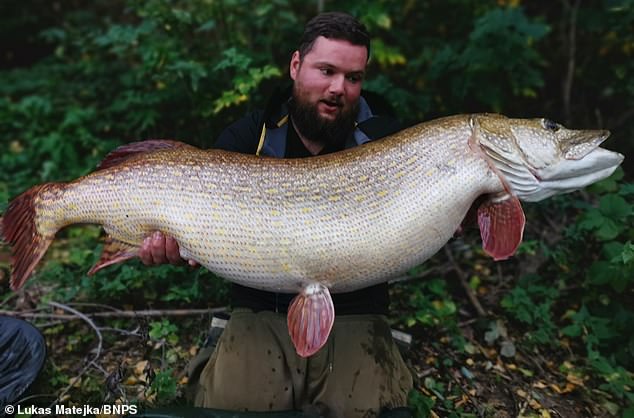 Last year, Czech angler Lukas Matejka (above) broke the coveted world record that has stood for 33 years after netting a monster pike that weighed a whopping 58lb 14oz

‘It’s a pity it wasn’t caught alive so we’ll never know its true weight but it gives people confidence that big fish close to the record could be out there.

‘Pike fishermen always want to catch the biggest possible but there are very few places you can go with chances you can break the record.’

Stuart Watts from the anglers’ club added: ‘This fish is completely out of left field, which is quite remarkable really, and from a fishery that is off the radar.’

Mr Morland said the pike was naturally recycled after he laid it in the vegetation for badgers and foxes to eat.