Palace aides’ refusal to publish findings of Meghan ‘bullying’ probe is an ‘olive branch’ to the Sussexes as royals face the prospect of release of Prince Harry’s memoir, say experts

Buckingham Palace’s decision not to publish the bombshell investigation into allegations of bullying by Meghan Markle is an ‘olive branch’ to the Sussexes, a royal expert told MailOnline today.

Commentator and author Richard Fitzwilliams has claimed the royal household may hope that the couple could ‘reciprocate in kind’ when it comes to Harry’s upcoming memoirs and rumours of another sit-down with Oprah Winfrey.

The Queen’s aides today confirmed Buckingham Palace had ‘revised’ its HR policies in the wake of the probe – but will not release the final report – as one royal insider claimed: ‘The household seems to be terrified of upsetting or provoking Harry and Meghan’.

Mr Fitzwilliams claims that publishing the findings would have had an ‘incendiary’ impact on the already strained relations between the households in London and LA – and may even have led to a legal challenge.

He said: ‘The Palace, faced with the possibility of a memoir by Harry later this year and who knows what else if the Sussexes, as budding philanthropists, were antagonised, has simply closed it down. This is obviously an olive branch to the Sussexes too’.

And amid claims it will cause anguish for the aides who claimed they were bullied, he added: ‘This is not a monument to transparency and those involved may well feel hard done by, especially considering the allegations that Meghan ill-treated staff’.

The Queen announced the probe last year after sensational claims emerged 15 months ago following complaints by staff during a ‘toxic period’ before the couple emigrated in early 2020.

‘Broken’ royal aides told of feeling humiliated, ‘sick’, ‘terrified’, left ‘shaking’ with fear, and being reduced to tears. Meghan was accused of having inflicted ’emotional cruelty’ on her staff and ‘drove them out’. One branded the Sussexes ‘outrageous bullies’.

The palace employees who spoke out claimed to The Times last year that there had been a litany of alleged ’emotional cruelty’.

Lawyers for the Sussexes vehemently denied the couple bullied or mistreated staff allegedly between late 2018 and early 2020. Meghan then accused the Royal Family of ‘perpetuating falsehoods’ about her and Harry in their interview with Oprah Winfrey that was released hours after the allegations emerged in March 2021. 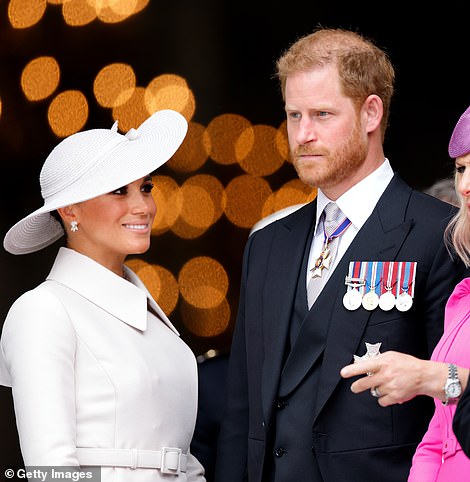 Controversial: Prince Harry and Meghan, Duchess of Sussex, during last year’s interview with Oprah Winfrey, which was broadcast in March 2021 just hours after the bullying claims emerged. The couple returned to the UK in June for the Platinum Jubilee (right) but were largely in the background 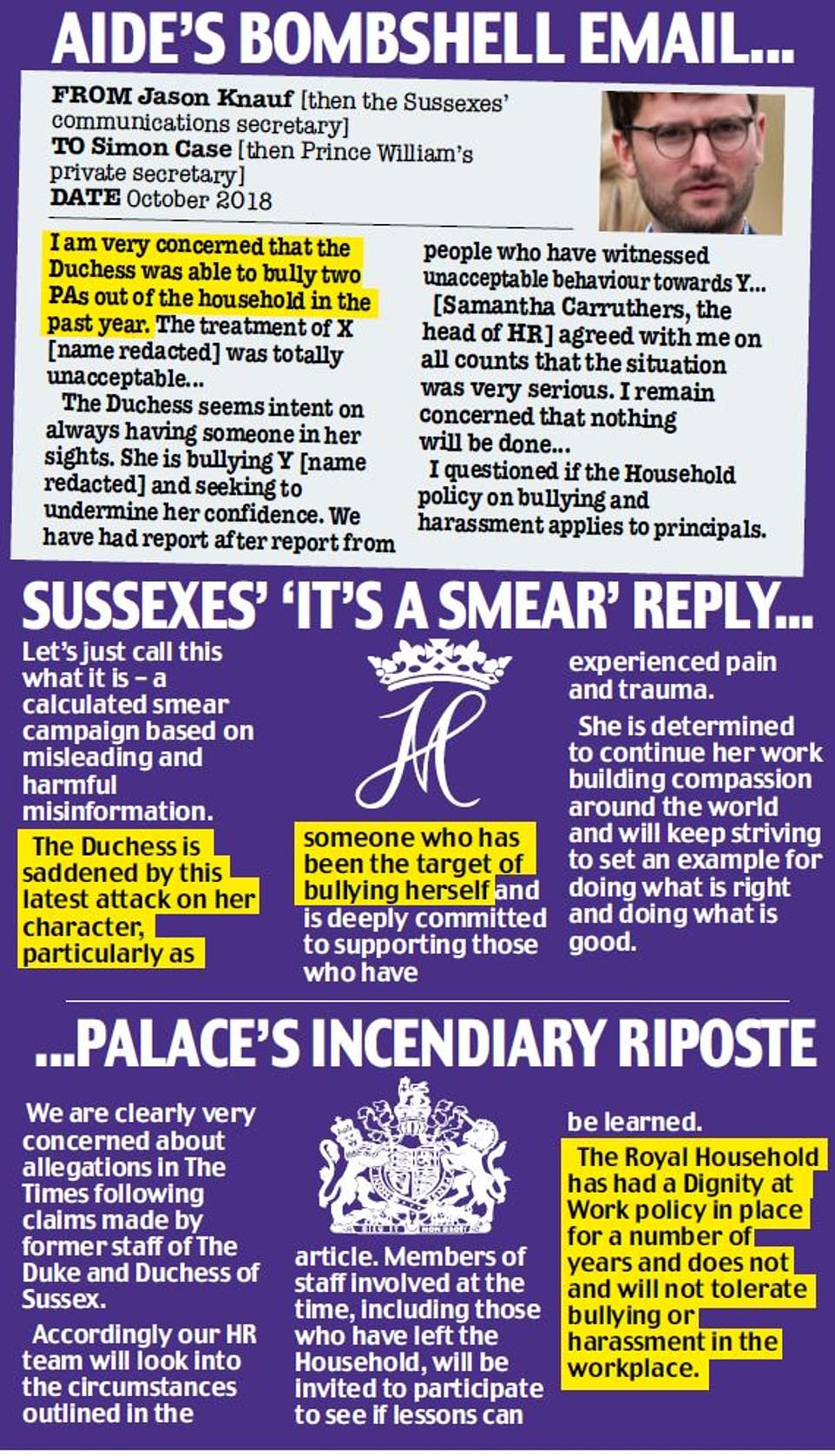 How the 2021 allegations unfolded with a statement from the Duchess of Sussex at the time saying it was a ‘calculated smear campaign’. Harry and Meghan were reportedly not interviewed as part of the probe 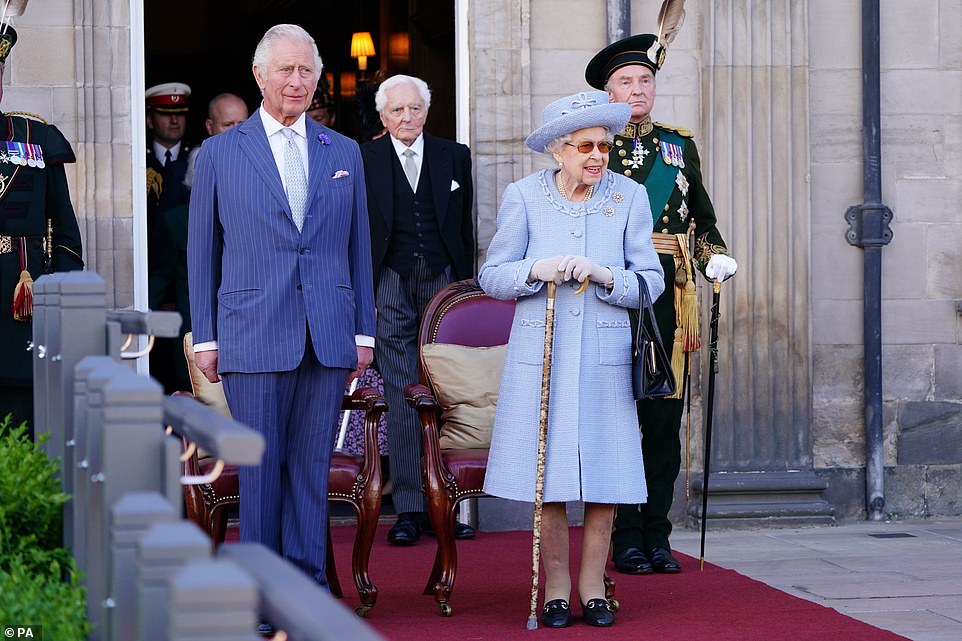 The Prince of Wales, known as the Duke of Rothesay when in Scotland and Queen Elizabeth II attending the Queen’s Body Guard for Scotland in the gardens of the Palace of Holyroodhouse today

A number of those aides who worked for the Sussexes were interviewed as part of the probe by a third party law firm. But today palace officials would confirm only that their investigation had concluded and ‘recommendations on our policy and procedures’ had been taken forward.

And amid a veil of secrecy over the probe, it is said that those who took part in the inquiry haven’t been told what the outcome is. Meghan and Harry were reportedly not interviewed over the allegations.

One source said: ‘People suspected it would be buried, and now it seems that it has. Considering those who participated did so at great personal and reputational risk to themselves, the fact that they haven’t even been told what the findings are is unfathomable.

‘I am sure they will be deeply distressed, but perhaps not entirely surprised given how things have been handled. The household seems to be terrified of upsetting or provoking Harry and Meghan.’

Another insider critical of the probe, and the decision not to publish, declared: ‘What was the point?’.

A spokesman for the Sussexes did not respond when asked to comment – nor did they respond to claims that the couple’s lawyers had been in touch with the palace throughout the process. It is also not known if Harry’s brother William and his wife Kate were asked to give evidence, because several of the aides at the centre of the row were shared between the Sussexes and the Cambridges.

Royal aides announced in March last year that they were launching an inquiry into claims that Meghan’s ‘belittling’ behaviour while a working member of the Royal Family drove two female personal assistants out of the household and ‘undermined the confidence’ of a third.

Staff were said to have been left in tears and feeling ‘traumatised’ – with some likening their condition to having post-traumatic stress.

The Royal Household employed a third-party law firm, paid for by the family privately, to probe the claims in a move that some predicted could increase tensions between Harry and Meghan and ‘the institution’.

The allegations have always been strongly denied by the duchess, whose lawyers described them at the time as a ‘calculated smear campaign’. They did not respond to requests for comment yesterday.

Last year a palace spokesman made clear that the specifics of the allegations – which were brought to the attention of senior household staff at the time by Harry and Meghan’s concerned press secretary, Jason Knauf – would not be probed.

But they said they would investigate how the ‘historic allegations of bullying’ were handled by officials and whether any changes to their HR policies and procedures should be instigated as a result.

A spokesman confirmed that ‘if’ those findings were to be made public, they would be included in this year’s Sovereign Grant report – the official annual review into the Queen’s public finances and the running of her household.

But announcing the report yesterday, her Master of the Privy Purse, Sir Michael Stevens, said of the investigation: ‘There is nothing on this in the report. As we said last year, this work was undertaken privately and had no Sovereign Grant money spent on it.

‘The review has been completed and recommendations on our (HR) policy and procedures have been taken forward. But we will not be commenting further.’

The Mail understands that although the review was concluded several months ago, the tiny handful of former royal staff invited to take part only recently discovered it had been wound up. 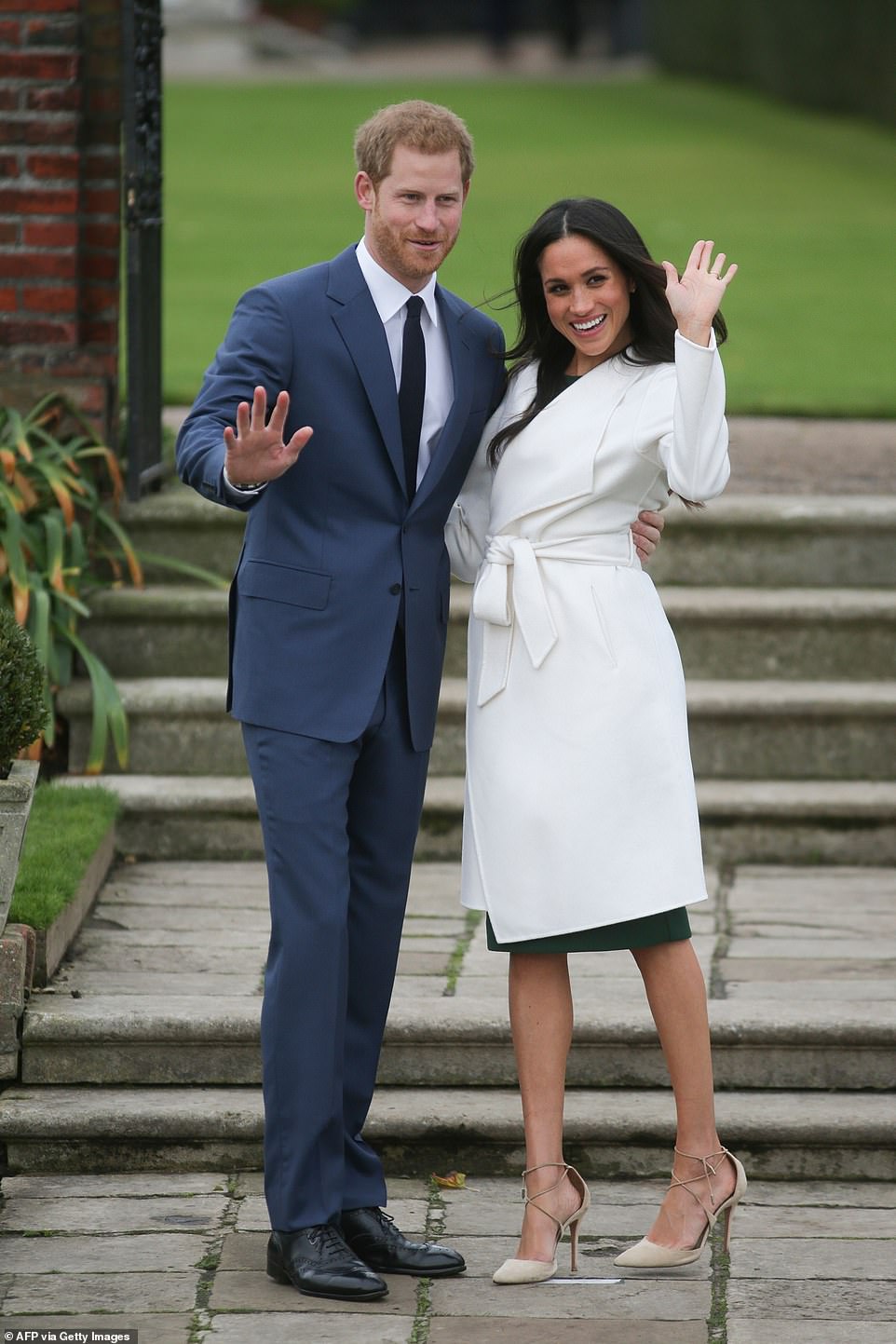 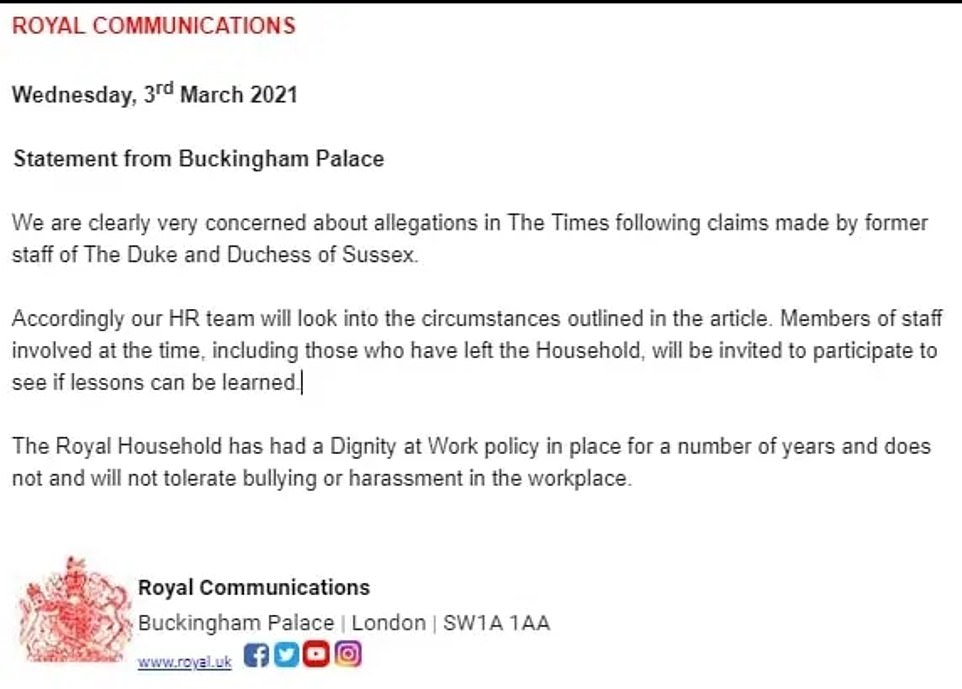 In a statement in March 2021, Buckingham Palace announced a formal probe into the allegations 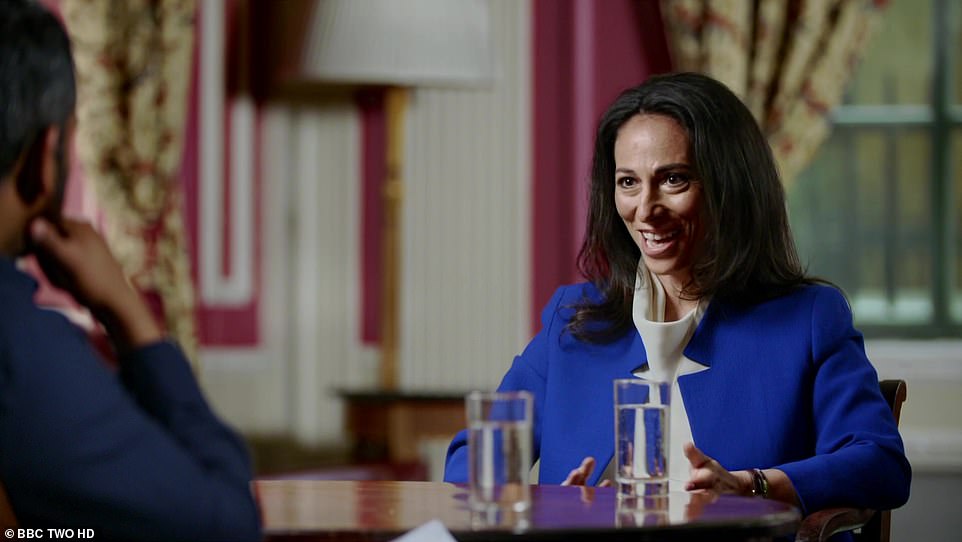 The allegations have always been strongly denied by the duchess, whose lawyers described them at the time as a ‘calculated smear campaign’. They did not respond to requests for comment yesterday. Pictured: Lawyer Jenny Afia speaking on The Princes And The Press documentary

The issue of the bullying report was raised during a briefing about the Sovereign Grant which showed:

Reports about Meghan’s alleged bullying of staff surfaced just ahead of her explosive Oprah Winfrey interview with Prince Harry early last year. The Palace said it took such claims seriously and vowed to investigate.

Last year, however, the Mail established that only a tiny number of royal employees – both past and present – had been spoken to and that staff feared it was already being ‘kicked into the long grass’. Those interviewed included two of Meghan’s former personal assistants, another senior female member of staff and Cabinet Secretary Simon Case, who was then working as Prince William’s private secretary.

Asked why the report into alleged bullying had not even been privately disseminated, a senior royal aide claimed yesterday: ‘One has to recognise HR matters involving individuals are private and those individuals who participated in the review… have a right to that confidentiality.

Palace prioritised peace, whatever the cost to their staff

Allegations that the Duchess of Sussex systemically targeted and bullied female staff have been deeply troubling – and problematic – for the Royal Family since they were aired early last year.

It was the first time a member of the Royal Family had been the subject of a formal complaint to senior management about their alleged behaviour – and there was no formal HR policy in place to deal with it.

The fact the allegations had first been made three years previously without any action seemingly being taken also uncomfortably accentuated the depth of the Palace’s paralysis over the issue.

The delicacy of the situation was further exacerbated by the state of relations between Harry and Meghan and the rest of the Royal Family.

Meghan, Duchess of Sussex and Prince Harry, Duke of Sussex depart the National Service of Thanksgiving at St Paul’s Cathedral during the Platinum Jubilee earlier this month

In the wake of their acrimonious departure as working royals and explosive Oprah Winfrey interview, palace officials were simply unable to predict just how this most defensive of couples would react. This is why they decided to focus their inquiries on how the allegations against Meghan were handled, as opposed to the substance of the claims themselves, whose truth or falsity has not been objectively established.

It seemed a neat-ish solution and one that was specifically designed to prevent the duchess and her legal team from having any say in what was being treated as a purely procedural matter.

Now officials have confirmed what the Daily Mail suggested would happen back in December last year – that their entire review is being buried, never to be made public.

And as I reveal today, even the tiny handful of staff who were consulted during the process haven’t been told what, if anything, the Palace plans to do to sharpen up their procedures in the future.

Senior palace officials such as the Queen’s private secretary, Sir Edward Young – who I have been told by multiple sources was also frequently on the receiving end of the worst of the Sussexes’ ire – wanted to do the right thing, but have clearly prioritised peace with Harry and Meghan over their workforce.

It has led some within the household to ask the question: is how your staff are treated and protected really deemed less important than angering the Sussexes?

The answer, for many, is clearly ‘yes’.