Philippine boxing icon Manny Pacquiao will face former two-weight UFC champion Conor McGregor in the boxing ring next year, and part of proceeds from the fight will go to coronavirus victims in his country.

“For the sake of all the Filipino COVID-19 victims, Senator Manny Pacquiao will be fighting UFC superstar Conor McGregor next year,” Jayke Joson, special assistant to Pacquiao, who is also a Philippine senator, said on Saturday.

“Our lawyers are finalising all the confidential details, but both fighters are getting ready for this one epic last boxing fight,” he said.

Joson’s statement followed a tweet by Irishman McGregor on Friday in which he said he would be “boxing Pacquiao next in the Middle East”.

McGregor, 32, announced on Twitter in June he was retiring from mixed martial arts for the third time. He first quit the sport in April 2016. In March 2019, he again announced he was hanging up his gloves, but on both occasions the retirements were short-lived. 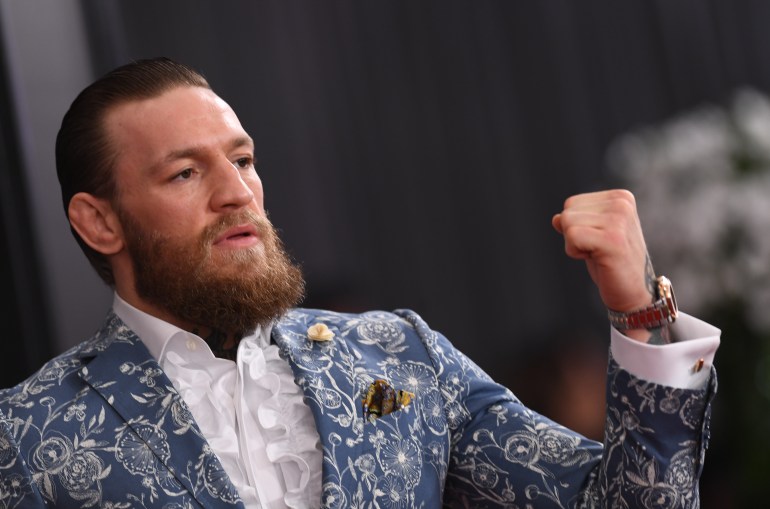 McGregor lost to welterweight great Floyd Mayweather in a money-spinning 2017 boxing match [File: Valerie Macon/AFP]Joson also said the fight could be staged in the Middle East after the coronavirus pandemic abates, adding Pacquiao would donate a “huge portion” of his prize earnings to Filipino COVID-19 victims.

The Philippines has the most confirmed COVID-19 infections in Southeast Asia and the region’s second-highest number of coronavirus deaths, next to Indonesia.

Total confirmed coronavirus cases in the Philippines surpassed 300,000 on Saturday, while deaths rose to 5,284.

The 41-year-old Pacquiao, whose speed and power belie his age, is the only man in boxing history to hold world titles in eight different divisions.

Pacquiao has not fought since claiming the WBA welterweight crown with a stunning victory over Keith Thurman in Las Vegas in July 2019, taking his record to 62-7-2 with 39 knockouts.

A bout against McGregor, who faced welterweight great Floyd Mayweather in a money-spinning 2017 fight, would guarantee Pacquiao another lucrative payday as he nears the end of an illustrious boxing career.

Despite his one-sided 10th round technical knockout loss to Mayweather in his boxing debut, McGregor had shown he was capable of challenging “the best boxers in the world”, Pacquiao’s promoter Sean Gibbons told AFP news agency.