Lima: Peruvian firefighters were fighting to contain a forest fire near the Incan ruins of Machu Picchu on Friday, as the blaze threatened to close in on the ancient city high in the Andean mountains.

The fire, which had engulfed an area about half the size of Vatican City, was started on Tuesday by farmers burning grass and debris to prepare to sow new crops. 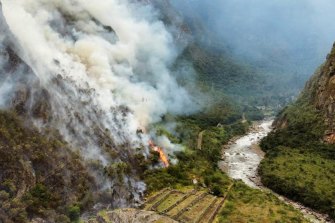 Machu Picchu, a complex of stone structures sitting atop a mountain, was built more than 500 years ago by the Incas, whose empire controlled large swaths of South America from what is today southern Ecuador to central Chile. 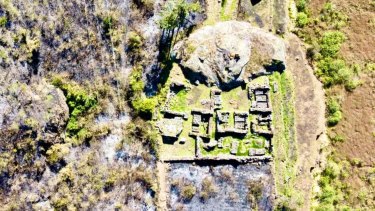 Controlled burnt areas can be seen near ruins on the hills tops above Cuzco.Credit:Facebook/Peru Ministry of Culture

“We have already been fighting the forest fire for two days and it has not been possible to get it under control, given the area is quite inaccessible,” said Roberto Abarca, director of the Cusco risk management and security office.

The Ministry of Culture in a Facebook post said specialist personnel were still evaluating the damage caused to one of the platforms of the archaeological monument Llamakancha. It said there was no damage to the Llaqta, or the Inka town of Machu Picchu.

“It should be reported that thanks to timely intervention and permanent maintenance and cutting of vegetation in the monument, the impact of the fire has been minimised,” it said.

The breathtaking ruins, which have made the surrounding Cusco region Peru’s top tourist destination, are considered one of the new seven wonders of the world.