Emergency crews were seen evacuating elderly residents from an Orlando nursing home on Thursday as a one-in 1,000-year storm continues to batter the theme park capital of the United States before it makes its way to South Carolina.

Hurricane Ian blasted the Sunshine State with catastrophic force on Wednesday afternoon as a Category 4 storm, knocking out power to more than 2.6 million residents as thousands remain trapped in their homes and hundreds of people are feared dead.

Rescue operations are now continuing throughout the state, but officials say they are only ‘scratching the surface’ of the thousands of people who are stranded or missing in the aftermath of the catastrophic water damage and 155 mph winds.

And in Orlando, the storm caused life-threatening and catastrophic flooding in the city of 2.7 million residents, the Wall Street Journal reports, leaving people to kayak through the streets to safety as all the highways into Orlando — and even the international airport — remain closed.

The feet-deep water was even strong enough to stop an ambulance in its tracks, as Orange County Fire and Rescue were seen trying to evacuate elderly residents from the Avante at Orlando nursing center.

The department posted a series of videos on Twitter Thursday morning showing crews entering the facility wearing knee-length jackets. They then came out carrying elderly residents in stretchers and bringing them to nearby buses, where they would reportedly be brought to nearby shelters.

As the fire rescue crews moved into the nursing home, wind from the storm could be seen picking up.

Officials said they evacuations were being conducted as a precaution as floodwaters continue to rise in the city, according to WFTV.

Ian, which was downgraded to a tropical storm earlier on Thursday, is now expected to once again reach hurricane force strength as it makes its way up to South Carolina, where authorities have already issued a hurricane warning for the entire coast as tropical storm-force winds reach as far north as Myrtle Beach.

Life-threatening conditions are now possible across the area, the National Weather Service says, as storm surges are expected to reach up to seven feet. 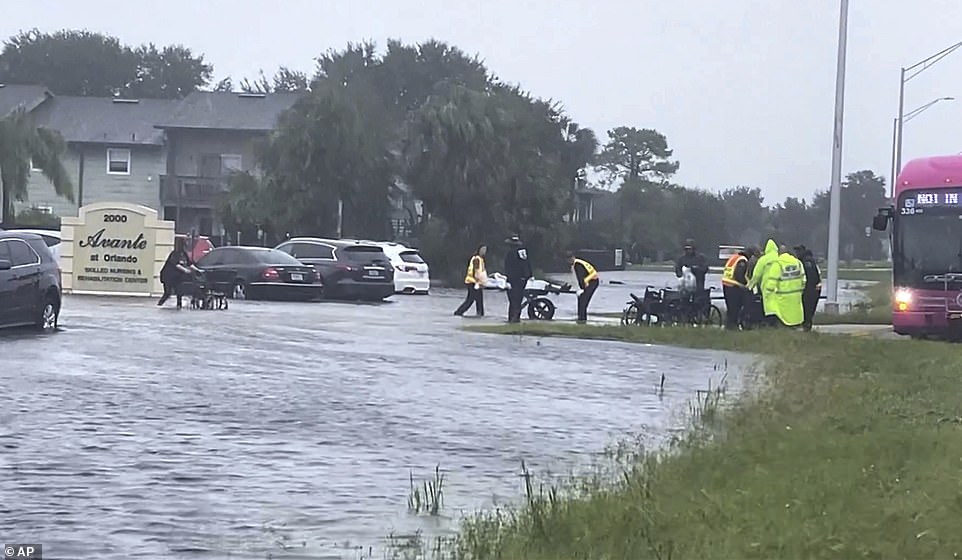 ORLANDO: Rescue crews were pictured transporting some of the elderly residents out of the nursing home on stretchers 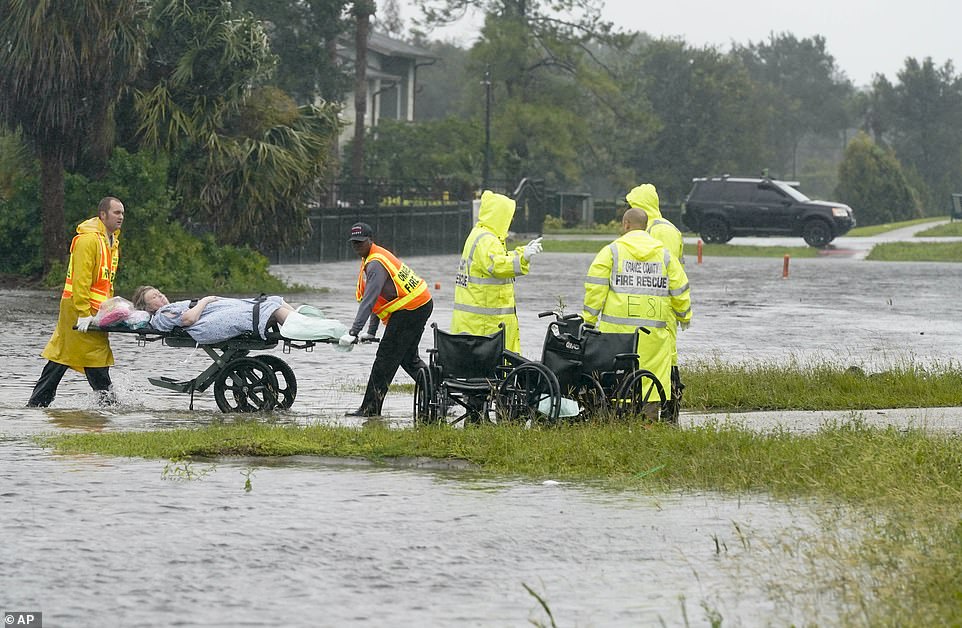 ORLANDO: Authorities say they are conducting the evacuations of the Avante nursing home as a precaution as floodwaters continue to rise 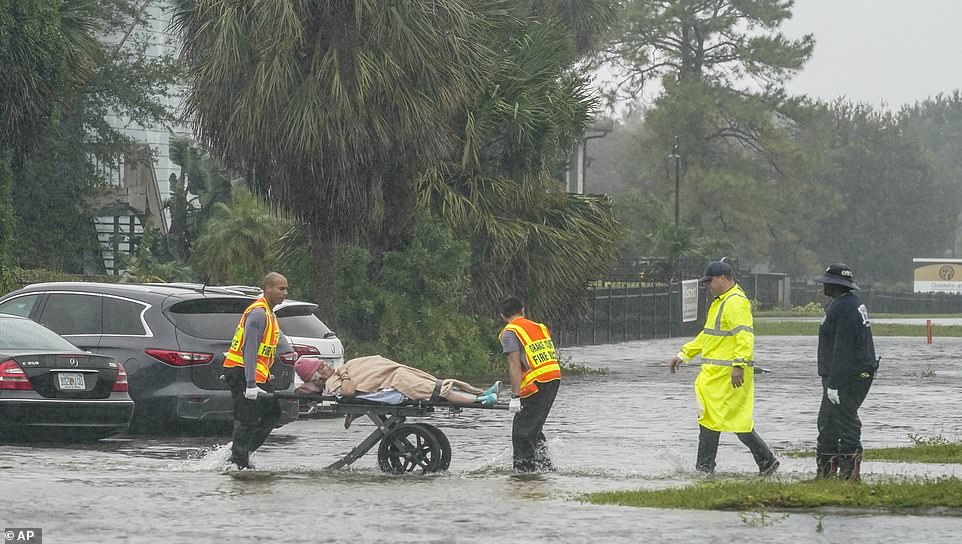 ORLANDO: The residents of the Avante nursing home are reportedly to be taken to nearby shelters 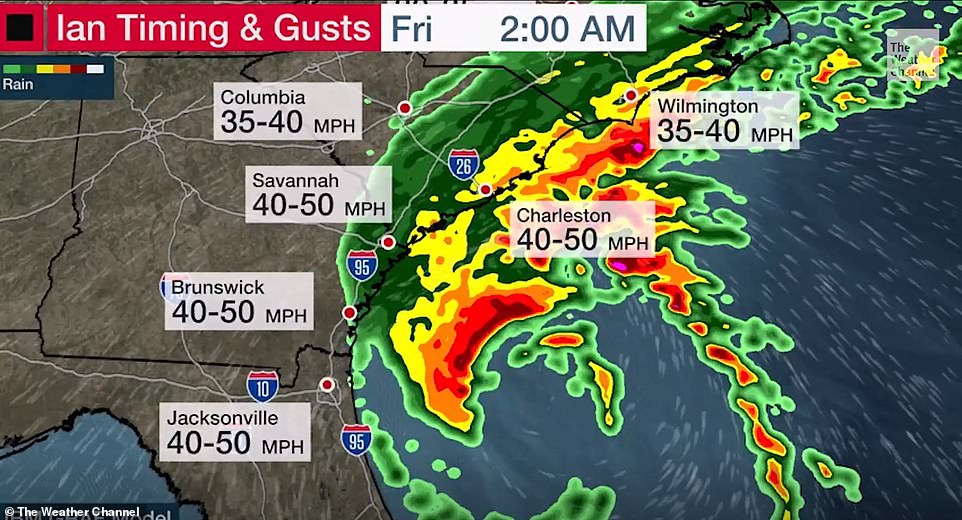 Ian is now expected to regain strength as it moves north to South Carolina, where a hurricane warning is already in effect

The storm has already caused massive damage in Florida,  where experts are expecting the damages to cost up to $260billion, though the clean-up efforts are currently unable to get underway as swathes of Florida remain underwater.

Hundreds of people are now feared dead, as 50 National Guard helicopters are starting the search and rescue for thousands who are stranded or missing in the aftermath of the catastrophic water damage and 155mph winds.

But rescuers this morning admitted they are only ‘scratching the surface’ and the actual number of victims could soar even higher.

Thousands are also trapped on their homes and some were forced on to their roofs to escape rising floodwater that swallowed two-story homes. 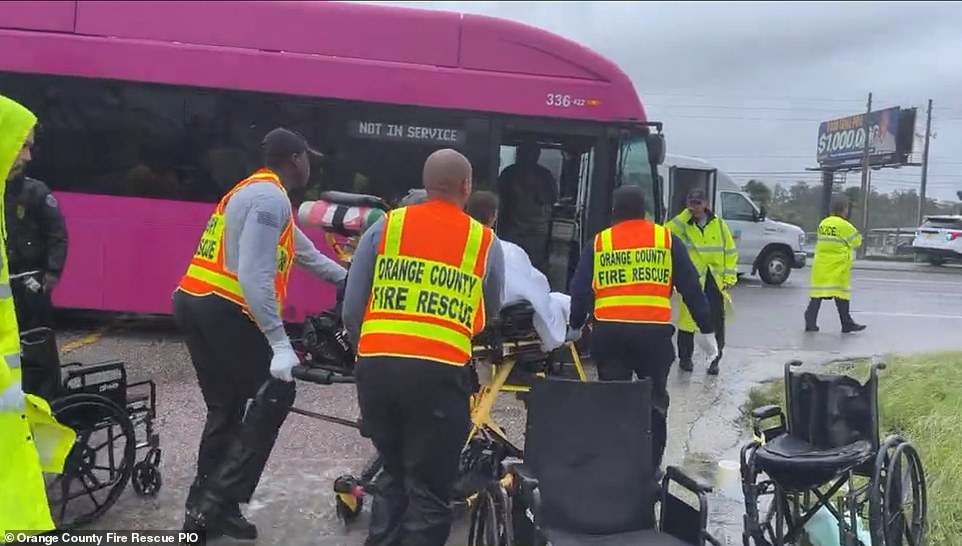 ORLANDO: Videos posted online by the Orange County Fire Rescue show crews bringing the residents to buses parked in front of the facility 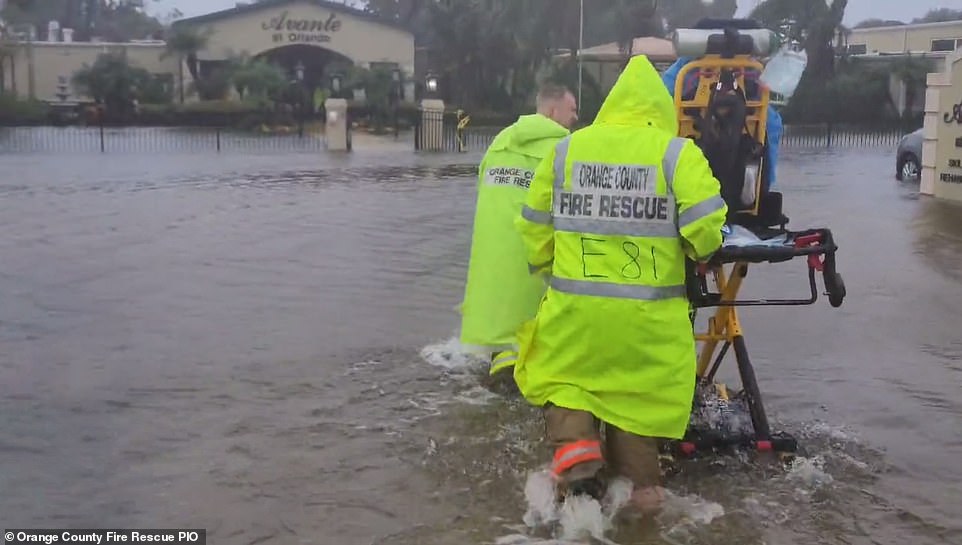 ORLANDO: Winds seemed to pick up from the now tropical-storm as crews tried to evacuate the residents 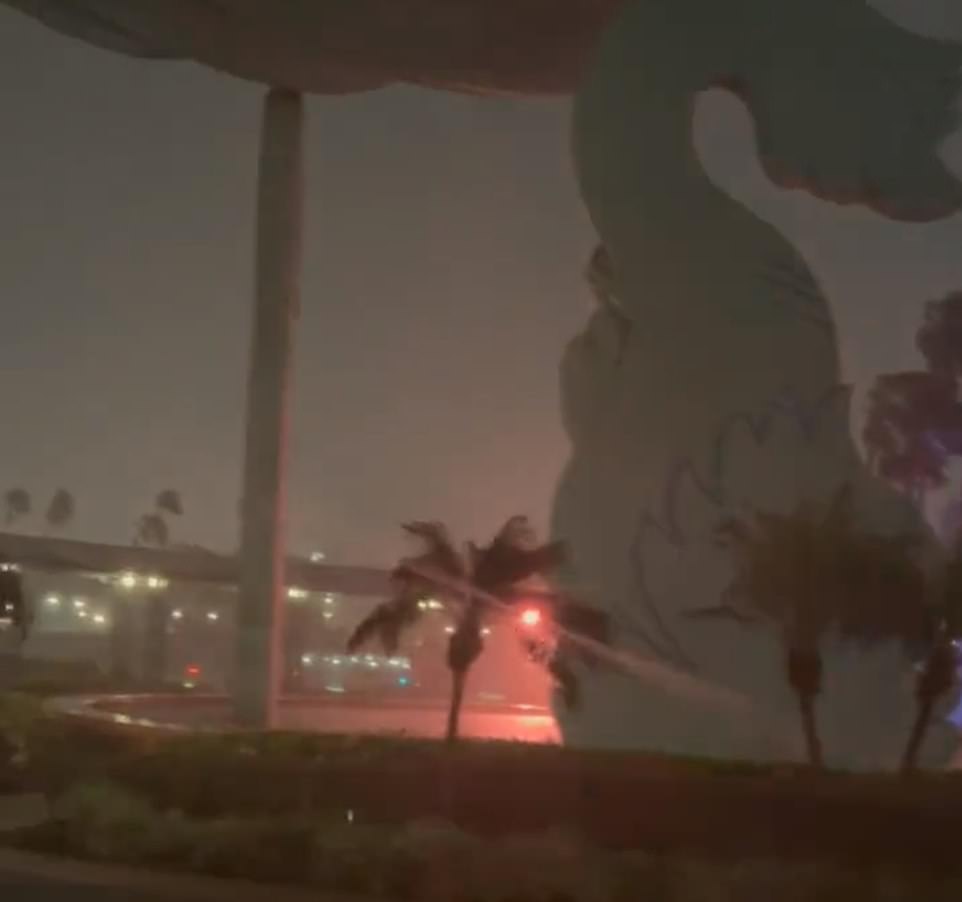 Photos and video posted to social media show just how devastating the storm was in Orlando, as it battered central Florida on Thursday.

Other residents, meanwhile, could be seen kayaking through the streets as Orlando officials warn everyone to stay off the streets.

And another video posted on social media shows that at least one bridge in the city crumbled, with water continuing to rush over the concrete.

All of the highways leading into the city — and even its international airport — remain closed, with Disney World and Universal Orlando Studios seeking new ways to entertain the guests at their hotels. 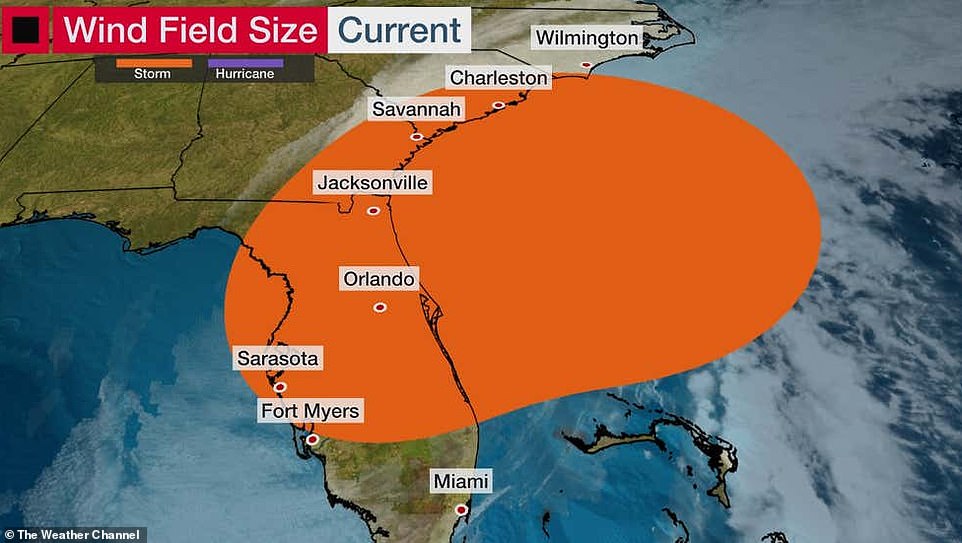 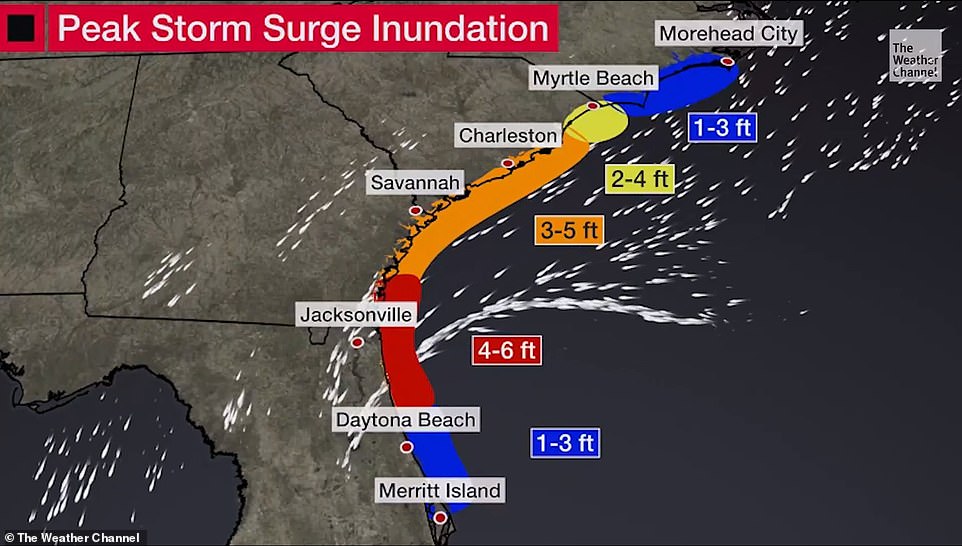 Parts of South Carolina could see storm surges reaching up to seven feet, according to the National Weather Service

In a statement on Thursday, Walt Disney World officials said: ‘We are thinking of our neighbors across Florida. We will get through this together and will be there to help our cast members and community.

As we keep safety in mind, our theme parks and other operating areas remain closed today while crews assess the impact of the storm and clear debris.

‘Thank you to all of our cast members who continue to care for the thousands of guests currently staying at our Disney Resort hotels.’

The statement comes after a Twitter user posted a video of massive flooding outside the Disney Swan and Dolphin Resort Wednesday night. 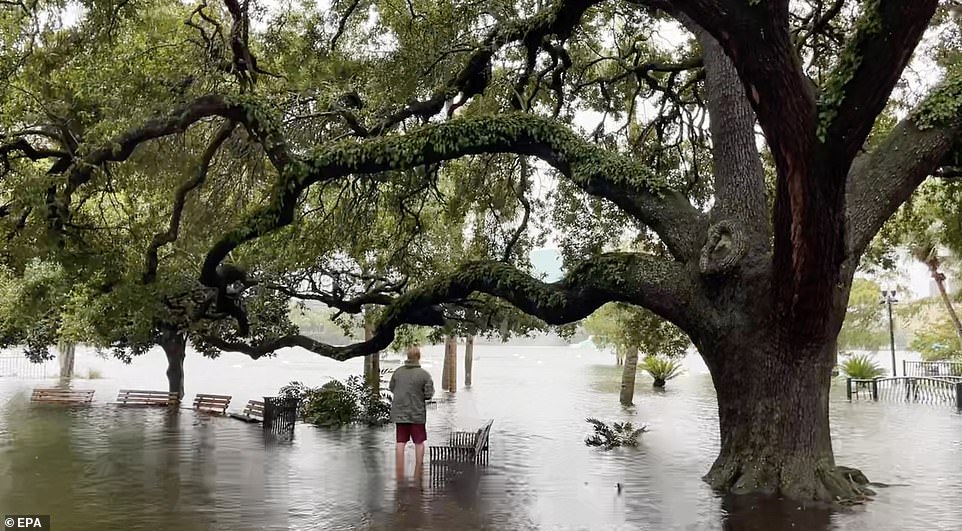 ORLANDO: A man is pictured walking near park benches near Lake Eola in the city’s flooded downtown on Thursday 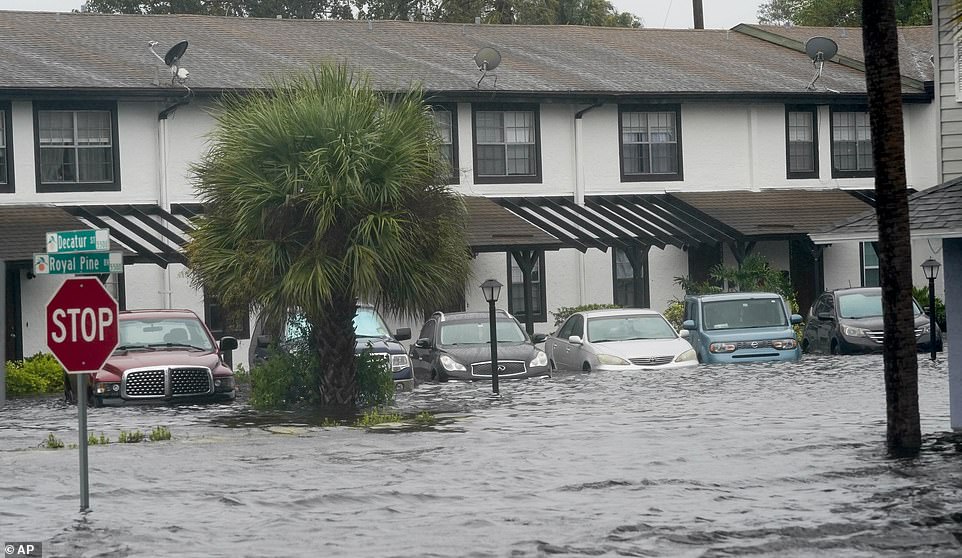 ORLANDO: Vehicles were submerged in the parking lot at the Palm Isle apartments in the aftermath of the devastating storm 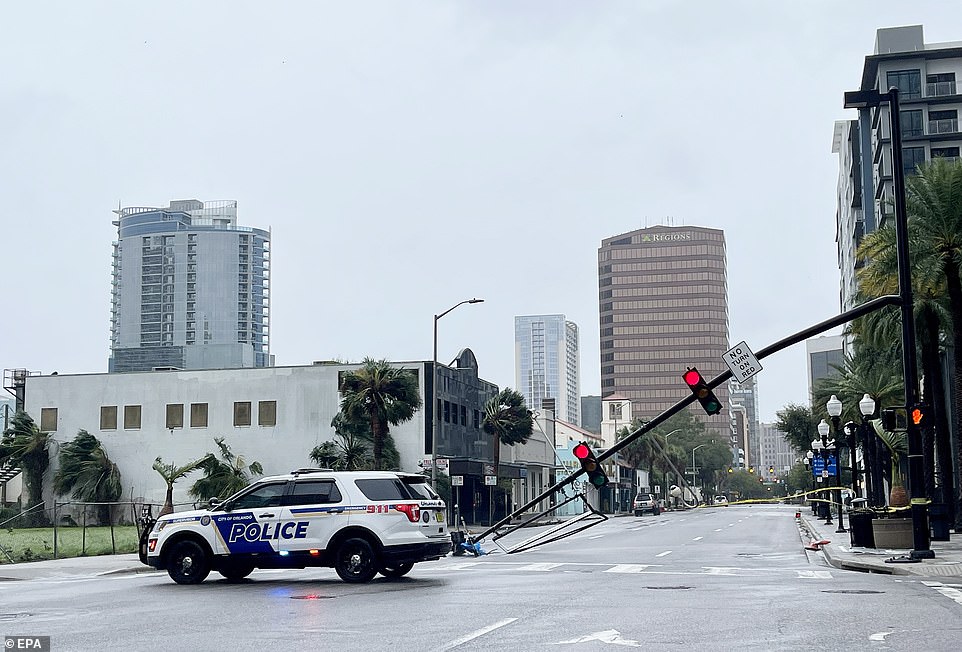 ORLANDO: Ian’s winds were strong enough to knock down a traffic light in the city’s downtown 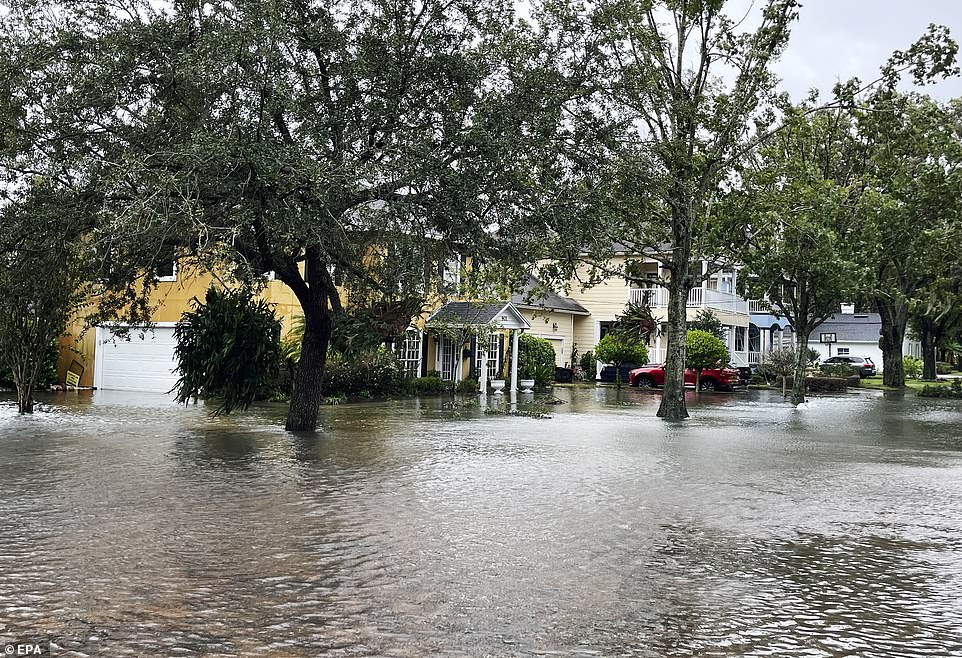 ORLANDO: Residents are urged to stay off the streets. A neighborhood is seen here completely flooded in the aftermath of the storm on Thursday

Hundreds of people are now feared dead, even as the storm continues its onslaught on its way to South Carolina.

Ian blasted ashore with catastrophic force on Wednesday afternoon as a Category 4 storm, but has since been downgraded to a tropical storm by the National Hurricane Center in an update early on Thursday.

But the National Hurricane Center is reporting it will be a Category 1 hurricane when it approaches the coast of South Carolina on Friday – which is set to be its second US landfall.

At around 11am EST, the National Hurricane Center reported maximum wind speeds of 70mph, making Ian a high-end tropical storm and close to hurricane-strength.

When it reaches wind speeds of 74 mph or greater, it will be considered a Category 1 hurricane.