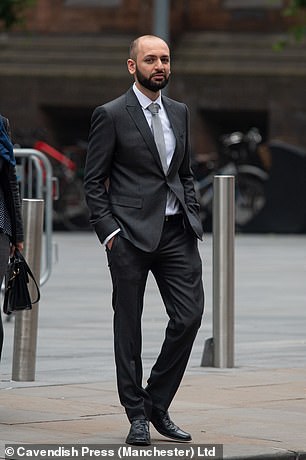 Salma Akbar, 29, was subjected to controlling and violent behaviour by company director Shabaz Khan (pictured), 30, over their five-year relationship

An optician left suicidal by her abusive marriage to a possessive ex-husband who tried to run her over while pregnant told a court how she ‘fell in love with a monster.’

Salma Akbar, 29, was subjected to controlling and violent behaviour by company director Shabaz Khan, 30, over their five-year relationship.

He would used an app to track her movements, told her what clothes to wear, smash her iPhone and would also grab her arms, Manchester Crown Court heard.

When the mobile eye doctor eventually split with Khan she refused to leave her house for three months for fear he was still following her.

The businessman, who runs a healthcare consultancy in Stretford, Greater Manchester, was arrested last year after he kept her under constant surveillance as she went on shopping trips and meals out with her friends.

Ms Akbar today gave an emotional statement at Manchester Crown Court as her ex-partner was banned from contacting her after he admitted common assault and stalking.

She described herself as a ‘bubbly, happy-go-lucky smiley strong independent woman’ who had been left with emotional damage from five years of abuse.

She said felt suicidal and only got out of bed to go to the bathroom, suffering crippling anxiety even after leaving him. 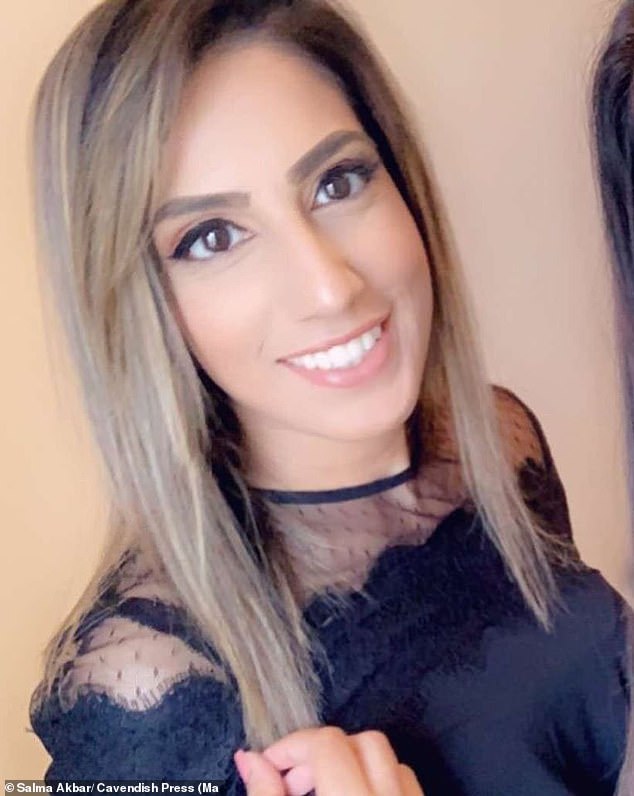 ‘I constantly felt like I had to ask for permission before I did anything, wore anything different or went anywhere new. I had anxiety attacks at the thought of going on holiday,’ she said.

The optician said she is still petrified he will follow and harass her and now needs counselling to deal with the flashbacks.

The court heard the couple began their relationship in 2014 and married in a Muslim ceremony two years later and they lived with his parents.

But David Toal prosecuting said that even before the couple were married Khan would behave in a controlling manner and would follow her when she was working as a mobile eye doctor. 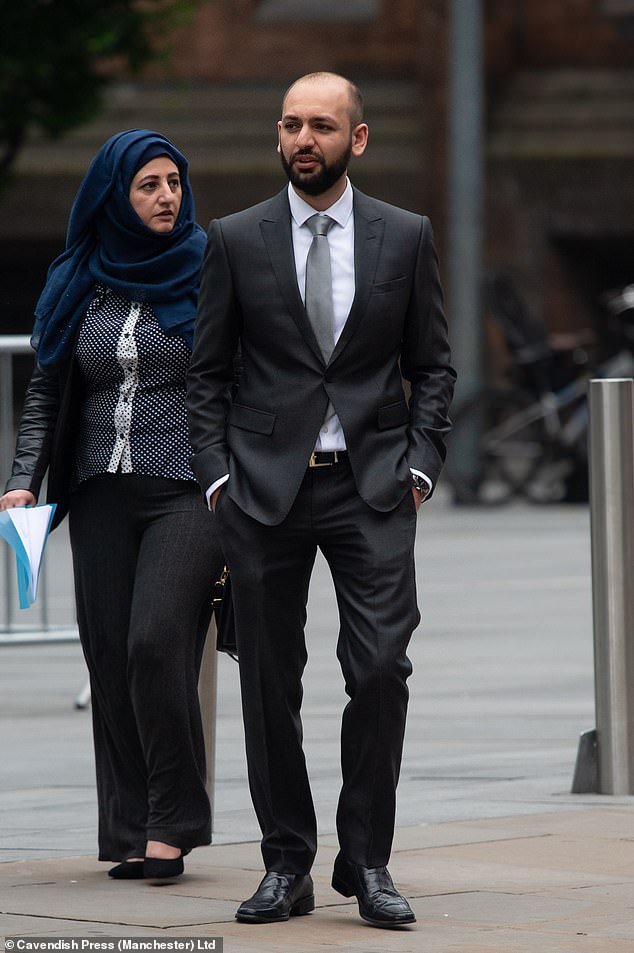 The businessman who runs a healthcare consultancy in Stretford, Greater Manchester, was arrested last year after he kept her under surveillance as she went on shopping trips

He would track her movements on various mobile phone apps and would also prevent her going out with certain people, would tell her what time to go out and get back, the court heard.

Mr Toal said: ‘In April 2018 when she discovered she was pregnant, she said she had had enough of the behaviour and the relationship was over.

‘She began to pack his belongings and asked him to hand back the keys to her flat but he refused.

‘She was then in front of his car and he slowly drove towards her and when she didn’t move out of way, the bumper came into contact with her legs.

‘He started driving at her nudging her legs with the car to the extent it caused her to fall backwards. 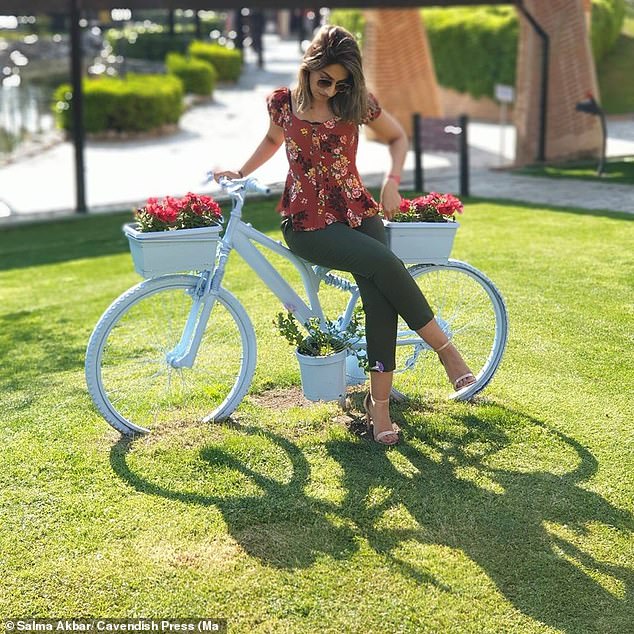 ‘She eventually moved as she thought he would run her over. Police attended and saw the complaint sat up, upset, with bruising to her legs.’

Khan was arrested but later bailed and began harassing her again – first over Facebook when he sent her a ‘thumbs up’ sign before following her in his car as she went on shopping trips or socialised in Manchester city centre.

Mr Toal said Ms Akbar began began to see him following her when she was out socialising.

‘She was driving to the Trafford Centre when she saw him following in the car right behind her and when she got inside he was still following her,’ he said.

‘She was so unnerved by this she spoke to her father and brother and asked them to pick her up and take her home.

‘Later she saw him sat in the Trafford Centre car park as she got into her own car and on another occasion she saw him stood with his cousin and they were taking photographs of her with their mobile phones. 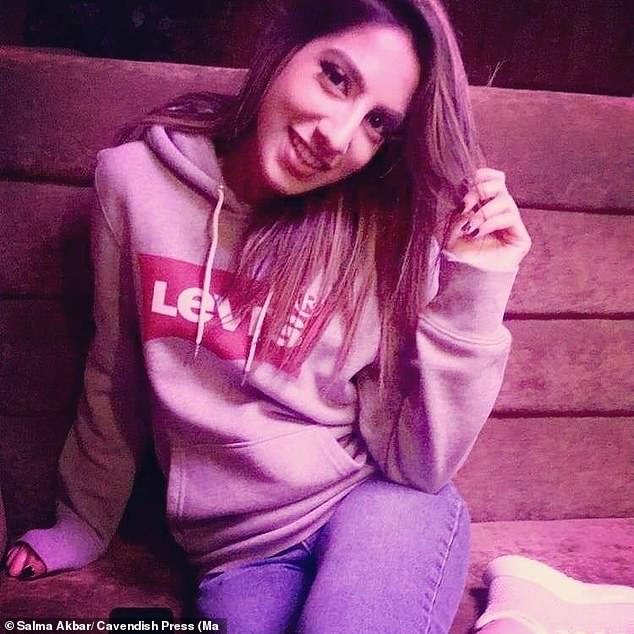 He would track her movements via mobile phone apps, initially on her iPhone then he downloaded a new app when she got a different phone, so he could monitor her movements

‘There were further incidents of him following her to work and this was designed to intimidate her. Her health was affected, she changed her routes to work and she didn’t wan to socialise in Manchester anymore.’

Khan was rearrested after he followed Ms Akbar to a restaurant in Salford Quays where she was having dinner with a male friend. He denied stalking her and dismissed her account as ‘total fabrication.’

Khan was sentenced to a 18 month community order with 200 hours unpaid work and was ordered to complete a Building Better Relationships programme.

He was banned from contacting Ms Akbar indefinitely under the terms of a restraining order.

In mitigation his lawyer Miss Kate Hammond said: ‘This defendant no longer lives in this area and he wishes to divorce and move on with his life.

‘He hopes he will get into another relationship and hopes nothing will happen like this again. He wishes to apologise for his actions.’

But sentencing him, Judge Patrick Field QC told Khan: ‘ The stalking was plainly the result of a planned and premeditated campaign of intimidation. It represents unacceptable behaviour that had plainly had a deep and disproportionate impact on Salma Akbar.

‘Given your own level of education and learning, one might have expected a greater level of understanding, insight and empathy for her over that period.’