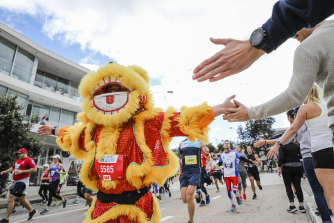 “There’s a lot of fluff and sequins,” said the Parramatta local. “It’s like running in a blanket.”

The world’s largest fun run returns to its famous Hyde Park to Bondi course for the first time since 2019 after the event was cancelled for two years due to COVID-19 lockdowns.

Bond ran his first City2Surf in 2014 dressed as The Flash before first donning the less thematically appropriate but more eye-catching lion dance costume in 2017 to honour his late kung fu teacher. He remembers the in-person event as “brilliant”.

“There were so many people wanting high-fives and stopping me mid-run to get photos, which was wonderful,” he said.

“I continued running each year, even in the last two years in which City2Surf didn’t run normally.”

On the event’s 50th anniversary in 2020, in contrast to the 80,000-strong crowd that usually charges down William Street, 13,000 participants plotted their own 14-kilometre courses in their neighbourhoods as the event went virtual.

Bond dutifully donned the lion dance costume and ran two laps of the Bay Run in Leichardt, attracting “a lot of stares” and spectating kids who demanded him to dance.

Organisers aimed for a return to a full-scale event last year, albeit with staggered starting groups, social distancing and QR check-ins. But the Delta wave forced the event’s would-be crowd to splinter back to their home suburbs. Bond ran along the Parramatta River for last year’s impromptu course.

“It’s been kind of nice mixing it up and running in the costume in a couple of different other locations,” said Bond. “But I would’ve preferred to have done it on the official course.” 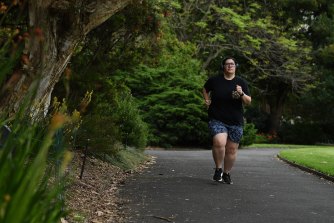 Organisers hoped to return in full force last year but the event was forced to go virtual again by lockdowns.Credit:Kate Geraghty

“I was absolutely terrible when I started kung fu,” he said. “I could barely punch. His patience and encouragement led me all the way through to 2016, when I became a black belt.

“Early in 2017, he stopped coming into classes. We didn’t hear much. Then the news came in that he’d passed away. He had an iconic laugh, every one knew when he was around. He’s very sorely missed.”

Bond had the suit custom-made in China, with red and gold colours to reflect the theme of the kung fu school his mentor ran for 35 years.

“This is why we do City2Surf,” says Bond. “I’ll be there on the day, bright and early, with the sparkly red and gold lion dance costume.”

The Sun-Herald City2Surf is on August 14. Registrations are open.