“Indigenous People’s Day recognizes that Native people are the first inhabitants of the land that became our country,” NYC Department of Education spokesman Nathaniel Styer said. “Recognizing it on the calendar puts a spotlight on the history, cultures, and traditions of Indigenous people and we look forward to honoring this day next school year.”

Columbus Day is traditionally observed on the second Monday in October, which this year falls on Oct. 11.

Indigenous People’s Day will be a non-attendance day for New York City public schools, meaning schools will be closed. Many school districts have already made the switch away from Columbus Day, or in the case of Oklahoma, combined the two holidays. 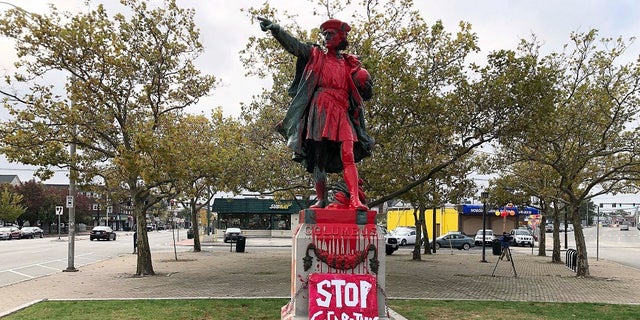 A sign reading "stop celebrating genocide" sits at the base of a statue of Christopher Columbus on Monday in Providence, Rhode Island, after it was vandalized with red paint on the day named to honor him as one of the first Europeans to reach the New World. (AP Photo/Michelle R. Smith)

New York City schools recently released the 2021-2022 school year calendar, which makes no mention of Columbus Day. The calendar also adds Juneteenth on June 20, 2022, as a holiday, when schools will be closed. That date is a Monday. Juneteenth is typically celebrated on June 19, which falls on a Sunday in 2022.

“In response to a bipartisan effort to give federal workers another day of paid leave by designating Juneteenth a federal holiday, we have offered a counterproposal that does not put us further in debt,” Johnson said Wednesday. “We support celebrating emancipation with a federal holiday, but believe we should eliminate a current holiday in exchange. We chose Columbus Day as a holiday that is lightly celebrated, and least disruptive to Americans’ schedules.”