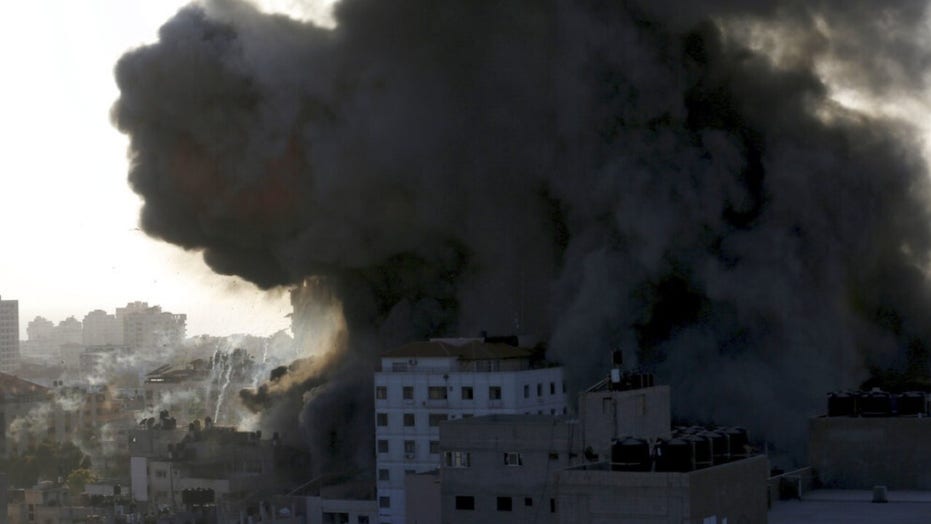 Fox News’ Trey Yingst reports on the escalating violence in the Middle East live from the Israel-Gaza border.

A Jewish man was reportedly left bloodied and sought refuge in a New York City store Tuesday after being caught in the middle of clashes Tuesday between pro-Palestinian and pro-Israel supporters outside the Israeli consulate as tensions continue to flare in the Middle East.

Hundreds of pro-Palestinian supporters gathered outside the consulate in midtown Manhattan to protest the deadly attacks on the Gaza Strip in a rally titled “rally to save Palestine.” They were met by counter-protesters showing support for Israel.

In a video tweeted by journalist Andy Ngo, a New York City police officer is seen escorting a man with a bloodied face out of what appears to be the main branch of the New York Public Library and into a store across the street. The New York Police Department told Fox News the man was attacked around 7 p.m.

As nearby officers observed a verbal dispute within a crowd, the man entered the crowd and was hit in the head with a metal chair, causing a laceration, police said. He was taken to Bellevue Hospital for treatment. No arrests have been made and an investigation into the matter is ongoing.

In the video, as the man is being escorted by police, someone off-camera is heard asking what happened to him.

A woman, also off-camera, replied that he said “very hateful comments.” As the officer and the man run across the street, two people holding Palestinian flags can be heard yelling “run (expletive)” and (expletive) you!” while following the pair.

Three officers are seen blocking the crowd from entering the store as the unidentified man stands on the other side of a store window and someone inside locks the front doors. The man showed a Jewish star necklace to cameras through a store window, the Post Millenial reported.

The NYPD did not immediately respond to a Fox News inquiry on the matter.

The tensions came as Israel and Hamas continue to trade airstrikes in some of the heaviest fighting since 2014 that has seen dozens of people killed, including children. Rockets launched from Gaza lit up the sky above Tel Aviv Tuesday as people ran for safety. Israel has continued to retaliate in the latest back-and-forth.

On Wednesday, the Israeli Defense Forces said Israel has come under attack from more than 1,050 rockets. In response, it said it has struck a “number of significant terror targets and terror operatives across the Gaza Strip, marking our largest strike since 2014.”