Nun, 85, was rammed to the ground and mugged for her bottle of HOLY WATER by ‘wicked’ moped thugs

An 85-year-old nun could have been killed when she was mown down and mugged for her holy water by moped thugs, Hull Crown Court heard on Friday.

The elderly sister was walking along Cottingham Road in Hull on November 23, 2019 at around 7.45pm when she was floored and had her bag snatched by Matthew Goodwillie, 23, and teenager Adam Fenton, now 21.

The dazed victim could not remember how many people had been on the moped and only noticed that her handbag had been stolen when she was helped to her feet by a shocked bystander.

The contents of the handbag was mainly personal items including keys with addresses written on tags, a silver medal on a string and the bottle of holy water. 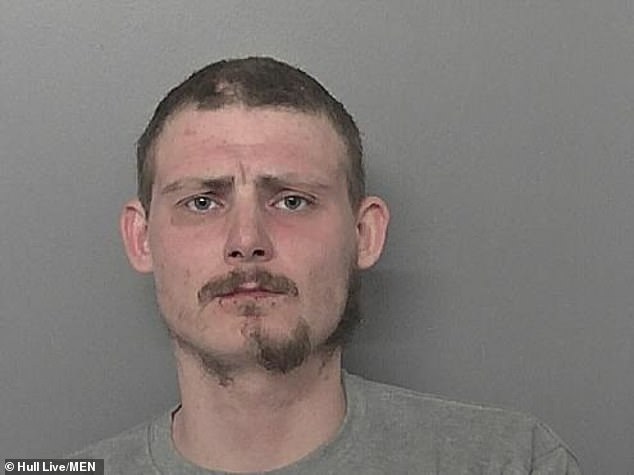 Matthew Goodwillie, 23 (pictured), was sentenced to five years and 11 months for his part in the robbery and was only found after his accomplice gave him up

CCTV footage of the incident, shown to Judge John Thackray, showed the moped passing her in the direction of Beverley Road before turning back, mounting the pavement and ramming the elderly nun to the ground.

She was reunited with her property when the satchel was later found after being thrown away by the robbers after the attack at 7.45pm in Cottingham Road, Hull, East Yorkshire.

Fenton, of Terry Street in Hull, was identified from CCTV footage and police who arrested him found 30 bags of cannabis with a street value of £535 at his home in Hull.

There was also evidence contained on mobile phones at Fenton’s address to suggest the defendant owed a number of people money, which may have motivated the robbery.

Prosecutor Jessica Strange told the court that Fenton had pleaded guilty to the charge of robbery and possession with intent to supply, and had offered to provide information about the crime to police.

When taken in for questioning, Fenton provided significant help to police and gave up his accomplice Goodwillie, who might otherwise have cheated justice, Hull Crown Court was told.

Fenton was given a 24-month suspended sentence and a community order of 200 hours unpaid work for his role in the robbery – a sentence which was reduced thanks to his co-operation with police.

Defence barrister David Godfrey said that since the time of the offence, Fenton had turned his life around, gaining employment and a partner and committing no further crimes.

Judge Thackray recognised Fenton’s willingness to co-operate and acknowledged he had been influenced by his older accomplice.

‘I do accept that you are genuinely remorseful and that over the last two years you have managed to turn your life around and find work.

‘You should consider yourself extremely lucky,’ the Judge warned.

Meanwhile, Matthew Goodwillie of Troutsdale Grove, Hull, was identified as the orchestrator of the vile crime and was jailed for five years and 11 months for the robbery and for possession of a bladed weapon.

He was described to the court as someone with a number of previous convictions including battery and drug offences.

Defence barrister Steven Garth told the court that Goodwillie had suffered a ‘wretched upbringing’ and had been on medication for unconfirmed schizophrenia and paranoia for several years.

The barrister went on to declare his client had been hooked on class A drugs since the age of 13.

Judge Thackray told Goodwillie: ‘Your carefully chosen victim was an 85-year-old lady walking on her own at night, among the most vulnerable people in our society.

‘You drove into her on a moped and rammed her to the ground. Such an action could have caused serious injury if not a fatality.’

‘I have not the first trouble in identifying you as the lead in this enterprise being the older man at the time of the offence and exerting considerable influence on you co-defendant.’

Mr Garth meanwhile described the robbery as ‘a wicked act on his part and a terrible ordeal for the elderly victim.’