The NSW government is facing calls to invest some of the proceeds from the record $100 million fine slapped on embattled casino giant Star Entertainment Group into independent initiatives to reduce gambling harm.

Prominent doctors, religious groups, anti-gambling advocates and the NSW Greens are all urging the state government to allocate at least 25 per cent of the $100 million penalty into establishing an independent gambling harm reduction foundation.

The casino group was handed the fine after a four-month independent inquiry, led by Adam Bell SC, found it had a deep-rooted cultural problem and had failed to stem criminal activity including money laundering. The $100 million fine is the maximum penalty possible under laws introduced by the NSW government in August and exceeds the $80 million fine slapped on Crown Resorts by Victorian gaming authorities earlier this year.

The Royal Australasian College of Surgeon’s Dr John Crozier said NSW must seize the opportunity to act on gambling harm. “Not only has there been inquiries into the state’s two casino giants, but there’s also the inquiry into poker machines, now is the time for investment into independent resources and research into gambling harm,” Crozier said. 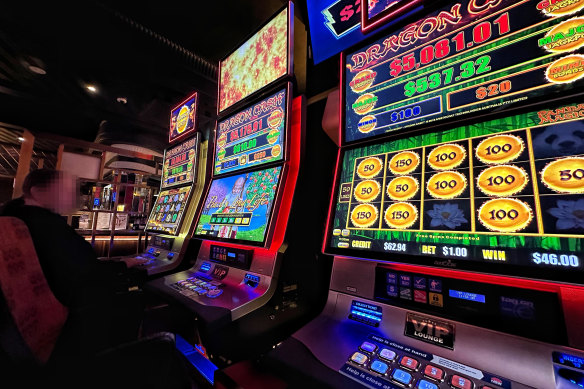 There is mounting pressure on the government to invest the $100 million penalty into reducing gambling harm.Credit:Nick Moir

The NSW government set up the Office of Responsible Gambling to coordinate gaming harm research initiatives in 2018. The office allocated $33 million for initiatives to prevent and reduce gambling harm in 2022 and 2023 including initiatives like Gamble Aware week, which kicked off on Monday.

A spokesperson for the NSW Independent Casino Commission said the repayment schedule for The Star’s penalty is still being developed but will eventually go to the government’s consolidated revenue fund. Minister for Gaming Kevin Anderson and the Department of Customer Service, which oversees Revenue NSW, did not respond to a request for comment.

“Under the legislation a pecuniary penalty is payable to the Secretary as a debt to the Crown, and is required to be deposited into the NSW government’s consolidated fund,” the regulator’s spokesperson said.

The Alliance for Gambling Reform chief Carol Bennett said the state government’s failure to reduce the negative effects of The Star’s Sydney operations proved the need for a truly independent body, pointing to a similar case in 2001 that saw the establishment of the Foundation for Alcohol Research and Education following an excess $25 million alcohol tax levied on brewers.

“There has been a spectacular regulatory failure when it comes to The Star,” Bennett said “Ignoring gambling harm is out of step with the community.”

Meanwhile, Wesley Mission’s chief and gambling reform advocate Stu Cameron said $10 million should also be reserved for a statewide self-exclusion register for problem gamblers to replace the existing localised list. NSW punters have lost $135 billion on poker machines over the past 30 years.

“There is serious need for research, advocacy and investment. We need a gambling legal service and a foundation to properly support our Indigenous community and those who are linguistically diverse. Is there any better way to spend such a penalty?” Cameron said.

The Star said on Monday it had various sources of liquidity available to it to pay the fine over a period yet to be determined by the commission.

The public inquiry into The Star was launched after a 2021 investigation by The Sydney Morning Herald, The Age and 60 Minutes alleged The Star enabled suspected money laundering, organised crime, large-scale fraud and foreign interference in its Australian casinos.

Wexted Advisor’s Nicholas Weeks has been appointed as independent manager of the Sydney casino, effective from 9am on Friday. Under the conditions of the suspension, the casino will still be able to trade, with Weeks now holding the licence. The $100 million fine was first revealed by this masthead on Sunday.

Crawford said the commission had decided to continue the casino’s operations to protect the livelihoods of The Star’s 8,000 employees but was adamant the group remains unsuitable to hold the coveted licence. Weeks will hold the licence for at least the next 90 days, but it’s expected the process to restore The Star’s management back to suitability will take longer. The regulator may retire the manager at any point after the 90-day period.