Washington: The International Space Station will this week take delivery of 5000 microscopic creatures to investigate the impact of zero gravity and long-term space travel on the human body.

The cargo, on SpaceX’s Falcon 9 rocket, will comprise 128 bobtail squid and 5000 tardigrades – tiny creatures which are known as “water bears”.

Tardigrades are useful for research as they are virtually indestructible. 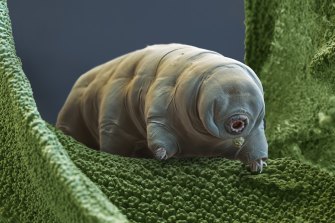 “[They] can survive being dried out, frozen and heated past the boiling point of water,” said Thomas Boothby, assistant professor of molecular biology at the University of Wyoming who is leading the experiment.

“They can survive thousands of times as much radiation as we can and go for weeks with little or no oxygen.

“They’ve been shown to survive and reproduce during spaceflight, and can even put up with prolonged exposure to the vacuum of outer space.” Scientists hope lessons learned can be applied to astronauts.

The tardigrades will be joined by the separate consignment of squid, sent by the University of Florida.

They are part of an experiment to focus on how microbes, vital for a healthy digestive system, react with human tissue in space.

Bobtail squid, only 3 millimetres long, glow in the dark, making it easier to track the impact of bacteria on the body.

“Animals, including humans, rely on our microbes to maintain a healthy digestive and immune system,” said Jaimie Foster, who is conducting the experiment.

“We do not fully understand how spaceflight alters these beneficial interactions.”

China has docked a spacecraft with its embryonic space station. The orbiting facility, called Tiangong – or heavenly palace – is expected to become fully operational next year.

Loaded with supplies, including meals such as shredded pork with garlic salt, the mission is to pave the way for China to send astronauts to the station which is to remain in orbit for 15 years.