Now Moderna seeks approval to give its Covid vaccine to children in Europe: US firm follows footsteps of Pfizer and says its jab is up to 100% effective at blocking symptoms in teenagers

Covid vaccine manufacturer Moderna has today asked European drug regulators for permission to give its jab to children.

The US-based company submitted its request to the European Medicines Agency with the aim of dishing out its vaccine to 12-17 year olds.

MailOnline has approached Moderna to work out when it plans to submit final safety and efficacy data to British regulators.

Moderna found that its two-dose vaccine was 100 per cent effective in a study that jabbed 2,500 children (Pictured: A teenager is given the jab in Florida, US)

The Medicines and Healthcare products Regulatory Agency (MHRA), which polices the safety of drugs in the UK, must give the jab the green light for it to be used in Britain.

But No10 has still yet to decide whether children will even be offered jabs, despite sources saying Whitehall are gearing up to jab schoolchildren in August.

MHRA bosses last week approved the Pfizer-BioNTech vaccine — which is an mRNA jab like Moderna’s — for over-12s. It had already given the green light for over-15s in December.

Pfizer’s jab, known as Comirnaty on the continent, was granted European approval in May for use on 12 to 15-year-olds following safety trials.

Moderna plans to ask the US Food and Drug Administration, which fulfills the same role in the US, and other agencies around the world to expand use of its vaccine to younger age groups.

It presented data from a trial of nearly 2,500 children given the two-dose vaccine.

Results showed there were no cases of coronavirus and no safety concerns among fully inoculated volunteers. 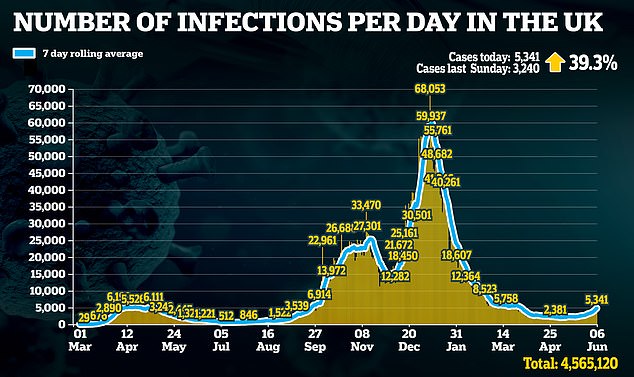 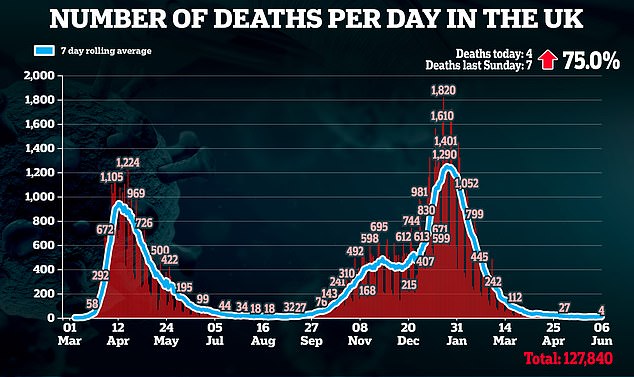 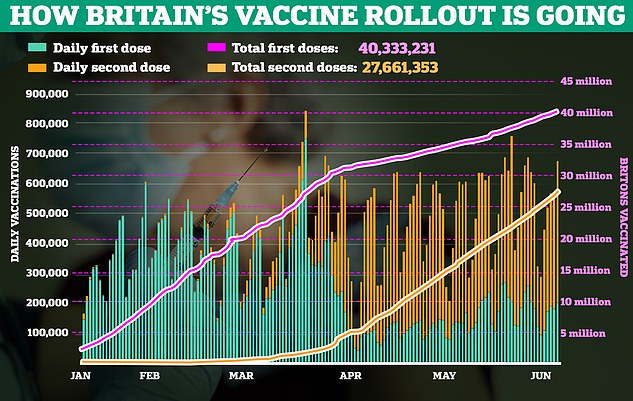 UK daily Covid figures released on 6 June show that 5,341 people tested positive for the virus, four died with the virus and 154 were admitted to hospital, while total vaccines seconded doses reached 27.7 million

WALES COMMITS TO JABS FOR ALL OVER-18s BY MONDAY

Wales today committed to offering jabs to all over-18s by Monday.

First Minister Mark Drakeford said the milestone will be hit six weeks ahead of the UK target for giving vaccines to everyone over the age of 18 by the end of July.

Wales has given a first jab to 2.18million people, or 86 per cent of the adult population, which is currently the best record of any country in the world.

However, Wales is lagging behind England and Scotland when it comes to the proportion of the population who have received both doses.

Mr Drakeford told a press conference in Cardiff: ‘We will make the offer of vaccination to all eligible adults six weeks ahead of schedule and we expect to reach 75 per cent take-up across all priority groups and age groups a month ahead of target.

‘This is a remarkable achievement and a tribute to the hard work of all those involved in the programme – to all those doing the complex work of planning behind the scenes and to the thousands of people vaccinating and helping to run the clinics across the country.’

He said the government would now ‘switch our efforts to accelerate second doses’, with a target of covering the whole population by September.

‘Subject to supply, we’re confident that we can deliver second doses as fast and as successfully as we have first doses,’ he said.

The updated strategy expects to deliver around 28,000 second doses every day over the summer months.

Moderna calculated the Covid vaccine was, therefore, up to 100 per cent effective at blocking symptoms after two doses.

An independent committee is continuing to examine safety data from the trial and all of the participants will be monitored for 12 months from their second injection.

The company has already asked the Canadian regulator Health Canada for approval to use the jab 12 to 18-year-olds and plans to ask the US Food and Drug Administration and other agencies around the world to expand use of its vaccine to younger age groups.

The UK’s Joint Committee on Vaccination and Immunisation (JCVI) — which normally decides on who should get a vaccine — is yet to set out their position on giving the vaccine to children.

Health Secretary Matt Hancock told the House of Commons today that despite evidence showing that the impact of Covid on children is ‘usually minimal’, there is ‘higher transmissibility among children’.

He also confirmed that he has asked the JCVI to advise the government on vaccinating 12 to 17-year-olds. ‘We will listen to that clinical advice, just as we have done throughout the pandemic,’ Mr Hancock said.

While the decision is yet to be made, the now-dominant Delta variant continues to spread in the UK.

Public Health England said the strain, first detected in India, has overtaken the Alpha variant to become the dominant variant in the UK.

PHE’s data suggests that the Delta variant poses a greater risk of hospitalisation and is spreading quicker through schools in England.

Data also shows that one jab is less effective against the variant, with two offering better protection.

Some scientists say it is necessary to jab children to stop the spread of Covid and protect high-risk children.

But experts have expressed concern over giving vaccines to children in wealthier countries ahead of high-risk individuals in poorer countries.

Professor Andrew Pollard, director of the Oxford Vaccine Group, said it is ‘completely wrong’ for vaccines to be rolled out to children who have a ‘near-to-zero’ risk of severe disease or death from Covid ahead of priority groups from poorer countries.

The scientists, who helped developed the Oxford/AstraZeneca Covid-19 jab, told the All Party Parliamentary Group on Coronavirus last month that it felt ‘completely wrong’ to allow that to happen.

Over six million under-17s have received the Pfizer-BioNTech vaccine in the US after it became the first country to approve the jab for children last month.

Tags: Approval, Give, MODERNA, Seeks, to