The offshore bank owned by American celebrity investor Peter Schiff has been suspended and Australian customers have been fined for tax evasion, as a global investigation into suspected criminal activity continues.

A joint investigation by The Age, Sydney Morning Herald, 60 minutes and New York Times in 2020 revealed that Euro Pacific Bank was the subject of a widespread tax evasion and money laundering investigation led by the J5 – a taskforce of tax chiefs in Australia, the US, UK, the Netherlands and Canada set up after the “Panama Papers” leak. 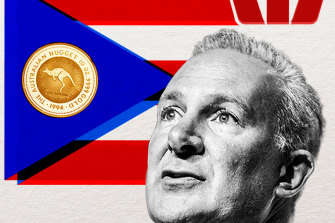 In Puerto Rico on Friday morning (AEST), the local financial regulator announced the bank would be suspended and fined $US765,000 ($1.1 million) for failing to comply with capital requirements and other regulations.

Natalia Zequeira Diaz, commissioner at Puerto Rico’s Office of the Commissioner of Financial Institutions (OCIF), said Euro Pacific had a “long history of non-compliance” with the territory’s regulations.

“In Puerto Rico, you comply with the law … [Euro Pacific] was given numerous opportunities but did not want to comply,” she said. “OCIF will not allow any international financial entity with a Puerto Rican government licence to operate outside the scope of regulations.”

Zequeira Diaz confirmed the bank, headquartered in the Puerto Rican capital San Juan, was insolvent and that Schiff was the sole remaining shareholder. She said a trustee had been appointed to liquidate the bank’s assets and return all deposits. 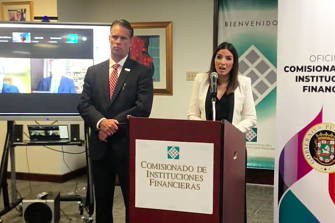 US Internal Revenue Service criminal investigation chief Jim Lee and Office of the Commissioner of Financial Institutions of Puerto Rico commissioner Natalia Zequeira Diaz during the announcement on Friday.

Schiff is suing this masthead for defamation. He was contacted for comment.

He told the New York Times on Friday he was given “no advance warning” of the regulator’s decision to suspend the bank and said it made “no sense” because “the bank has done nothing wrong”.

He told the newspaper the suspension order referred to “insufficient capital”, but did not mention anything about money laundering or tax evasion.

“[Euro Pacific] was given numerous opportunities but did not want to comply.”

The regulator launched an eight-month investigation into Euro Pacific in October 2020, following allegations clients were using the bank to launder money and evade tax in their home countries.

The findings of the audit are confidential, but Zequeira Diaz said the regulator identified a number of “deficiencies” in the way the bank was operating.

Euro Pacific agreed to introduce changes to its board of directors, and raise additional capital to ensure it complied with Puerto Rican law, but Zequeira Diaz said the bank failed to provide key documentation and breached local regulations. 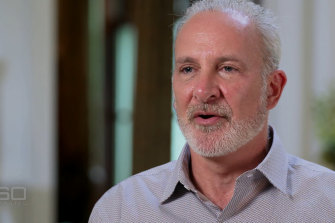 Zequeira Diaz said the regulator decided to suspend the bank to prevent “irreparable damage” to the interests of its clients and Puerto Rico’s reputation as a global financial hub.

The local regulator was investigating Euro Pacific Bank independently but joined forces with the J5. US Internal Revenue Service Criminal Investigation and J5 chief Jim Lee said the closure shows “the world the power of co-ordination, collaboration and partnerships”.

“There is no doubt that OCIF’s work sends a strong message to others that the Puerto Rican financial industry will not be a haven for tax evaders or illegal conduct. We stand here together today to display the strong partnership we have with OCIF and to commend their leadership for taking decisive action,” Lee said.

Lee said there were more than 100 active and ongoing civil and criminal investigations around the world as a result of Operation Atlantis, but did not confirm whether Schiff was a subject of proceedings.

“Tax crime is not victimless.”

Australian Taxation Office deputy commissioner and J5 chief Will Day said the agency had audited more than 100 Australians linked to Euro Pacific and taken action against about half of the bank’s customers in Australia, including raising further tax and applying tax penalties in some of those cases.

He said criminal investigations were ongoing, and the taskforce was working with criminal agencies, including the Australian Federal Police and the Australian Criminal Intelligence Commission.

“Our work is continuing in both the civil and criminal investigation stage,” he said. “Tax crime is not victimless.”

Day said he could not provide a figure on the extent of offshore tax evasion in Australia but said the closure of Euro Pacific Bank was an “important milestone” for Operation Atlantis.

“Ceasing a financial institution’s operations stops it from being able to facilitate suspected tax evasion and money laundering,” he said. “When we launched the J5, we were determined to make the world a smaller place.”

The investigation by The Age, Sydney Morning Herald, 60 minutes and New York Times discovered hundreds of Australians had been caught in the global tax evasion probe, including Sydney businessman Simon Anquetil, the man behind one of Australia’s biggest tax rorts.

Others previously identified as having Euro Pacific accounts included a Russian cyber criminal wanted by Australian and US authorities for running the world’s biggest cyber malware attack and an Australian suspected of laundering cash for a billion-dollar drug-trafficking syndicate.

The West Australian government-owned Perth Mint and Westpac were also caught in the investigation for their role in supposedly backing the bank’s credit card with gold and acting as correspondent banks in Australia for Euro Pacific.

Day would not confirm whether either of the institutions was still being investigated, citing confidentiality reasons, but he said the ATO had “a good relationship” with financial institutions in Australia and was working with major banks to help address tax evasion and money laundering.

Westpac terminated its correspondent bank relationship with Euro Pacific after the media investigation.

OCIF has scheduled a hearing with Euro Pacific and its shareholder, Schiff, in 10 days’ time to discuss whether the order suspending the bank’s operation will remain in place.