Liz Truss is expected to hold talks with Irish premier Micheal Martin about Northern Ireland’s Brexit political impasse when he visits London for the Queen’s funeral.

They are expected to meet after the Taoiseach represents Ireland at the Westminster Abbey ceremony on Monday.

It would be their first official meeting since Ms Truss became Prime Minister last week, although they both attended a memorial service for the late monarch in Belfast yesterday.

It comes after Mr Martin suggested the Queen’s death was an opportunity to ‘reset’ relations between Britain and Ireland following bitter Brexit disputes.

Norther Ireland is currently gripped by heightened political tensions at Stormont and between the UK and Irish governments over post-Brexit arrangements for Northern Ireland.

Sinn Fein became the largest party at the assembly in May’s election but the DUP has refused to restore the power-sharing executive until the Northern Ireland Protocol of the UK/EU Brexit deal is replaced.

Ms Truss is also threatening to push ahead with legislation at Westminster to scrap key elements of the Protocol if negotiations with the EU on revamping trade rules continue to stall.

This has caused a furious response from both Dublin and Brussels, with the bloc launching fresh legal action against the UK. 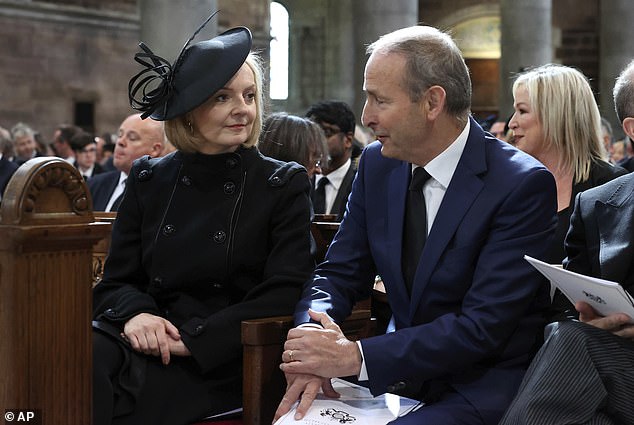 It would be their first official meeting since Ms Truss became Prime Minister last week, although they both attended a memorial service for the late monarch in Belfast yesterday.

Mr Martin attended a memorial service for the Queen at St Anne’s Cathedral in Belfast yesterday.

The service was held as part of King Charles’s Operation Spring Tide tour of all UK nations, following his proclamation as monarch.

In an interview with the BBC prior to the service, the Taoiseach suggested it could now be a moment to repair relations that have been damaged by the Northern Ireland Protocol row.

He described the Queen’s historic visit to Ireland in 2011, the first by a British monarch in 100 years, as a ‘watershed moment’ for Anglo-Irish relations and said it had left his country with a ‘fondness’ for Her Majesty.

‘I would like to think that the visit of Queen Elizabeth II first of all to Ireland, her passing would give us all time for reflection,’ Mr Martin said.

‘And will remind us of the need to proactively nurture the relationship between Britain and Ireland to enhance it in the time ahead.

‘And that this moment gives us that opportunity for reflection and for resetting, in a good way, that relationship.’ 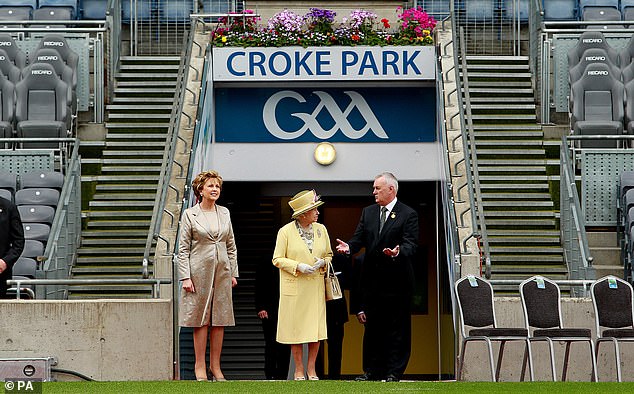 The Queen visited Dublin’s Croke Park as part of her historic visit to Ireland in 2011, the first by a British monarch in 100 years