An experienced lecturer was fired by his college bosses after ‘lightly’ throwing cardboard at a student who had dozed off in one of his classes.

Steve Dix, who taught at Neath Port Talbot College, Wales for more than 22 years, noticed that the teenager had fallen asleep during his mechanical engineering class with his face down on the desk for 15 minutes.

After calling his name twice to no response, Mr Dix then ‘lobbed’ cardboard at the student who abruptly sat up ‘bleary eyed’, an employment tribunal heard.

The boy’s guardian threatened to call social services if the matter was not dealt with and Mr Dix was sacked after the college found his actions were ‘dangerous’ and ‘intimidatory’, the panel heard.

Mr Dix – a veteran lecturer – took his former employer to a tribunal claiming the decision to fire him was ‘unduly harsh’.

A panel found that while the disciplinary process was not followed properly, he had been ‘reckless’ in throwing the cardboard. 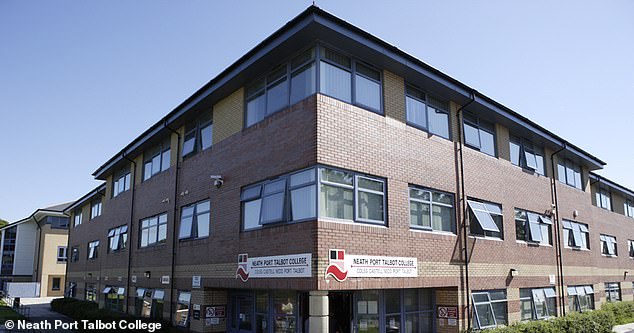 Steve Dix, who taught at Neath Port Talbot College, Wales (pictured) for more than 22 years was fired by his college bosses after ‘lightly’ throwing cardboard at a student who had dozed off in one of his classes

The hearing in Cardiff heard that Mr Dix had worked for Neath Port Talbot College, Wales as a Mechanical Engineering lecturer for 22 years and had a ‘clean disciplinary record’.

The tribunal heard that during a workshop in February 2018, Student A – who cannot be named for legal reasons – put his hood up and his head down on the desk.

Mr Dix, having tried to wake the boy to no avail twice, then ‘lobbed’ some A4 cardboard, used for engineering drawing, at him.

The lecturer claimed the cardboard didn’t hit the student, however the college concluded that it did after an investigation.

The tribunal heard that under college rules no physical contact is permitted between lecturers and pupils. After the school was contacted by Student A’s foster parent, Mr Dix was suspended.

The matter was later investigated by the school which found Mr Dix had ‘conducted himself in an unprofessional, unacceptable and irresponsible way’.

During the investigation the lecturer said it was an ‘exceptionally minor’ incident and said the board was ‘lightweight with no sharp edges’, adding that ‘it was not a dangerous manoeuvre’.

‘I can’t believe we are here over this, I really can’t, but it is what it is’, he told investigators.

Mr Dix was then sacked seven months later after the college found his behaviour amounted to ‘gross misconduct’ – an ‘unduly harsh’ decision he then appealed.

Disagreeing with this assertion, the panel – headed by employment judge Rachel Harfield – agreed that his actions were ‘dangerous’.

She concluded: ‘I do not find that it was outside the range of a reasonable employer in these circumstances to find that Mr Dix had been reckless in his action of lobbing the boards.

‘Whatever Mr Dix’s intentions, there would have still been an element of risk as to what could potentially happen when the boards left his hand.

‘I have found some defects in the process. Much of it was remedied as the process went on and/or given Mr Dix’s admission about lobbing the board diminished in importance.

‘In my judgement it is inevitable that Mr Dix would have been dismissed in this case, even if a fair procedure had been followed.’

However, despite the judge ruling the college was right to sack Mr Dix, he won his claim of unfair dismissal on a technicality as the investigation process had ‘defects’.

The procedural flaws included poor record keeping, the misattribution of statements and the make-up of disciplinary panel and appeal panel.

Mr Dix will not receive any compensation despite winning his claim as he would have been fired if a fair process was followed, the judge said.