Singapore: An Australian company is under fire over the proposed sale of a mine in the troubled south-east Asian nation of Myanmar to an outfit with alleged links to the military junta.

Perth-based Myanmar Metals, whose shareholders include prominent miner and Rich Lister Mark Creasy, has announced plans to offload its 51 per cent stake of the Bawdwin mine in north-east Shan state near Myanmar’s border with China, having outlined problems financing the project following a coup in the country in February. 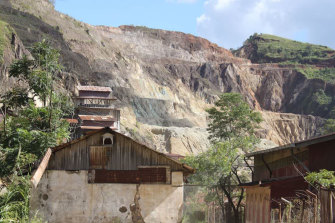 The Bawdwin project was once run by Herbert Hoover, who went on to become US President.

But Myanmar Metals’ $US30 million ($A40.9 million) sale is being challenged by civil society groups, who have lodged a complaint with the Australian National Contact Point (AusNCP), an Australian government agency which gauges multinationals’ adherence to OECD guidelines for business conduct.

One of the world’s leading silver, lead and zinc mine deposits, the mine is forecast to generate $US2.9 billion over the next 13 years once it is operational. Activists fear its profits will end up in the hands of a military regime whose bloody crackdown on pro-democracy protesters and opponents of its takeover has left more than 1000 dead.

Myanmar remains in a state of chaos seven months after the army took over, arresting elected civilian leader Aung San Suu Kyi and detaining more than 6400 others including Australian economist and Suu Kyi adviser Sean Turnell.

Clancy Moore, the Australian director of NGO coalition Publish What You Pay, which has filed the protest alongside 245 Myanmar-based groups, said the sale could “lead to millions of dollars of revenue lining the pockets of Myanmar’s murderous generals once the mine becomes operational”.

“The company should divest from the project in a responsible and transparent manner. This means doing proper human rights due diligence, disclosing proposed contracts and consulting local communities.”

Creasy, who has a fortune of $857 million according to The Australian Financial Review Rich List, has an 11 per cent stake in Myanmar Metals.

The sale, to be voted on by shareholders on September 24, is to Win Myint Mo Industries (WMM), a Myanmar entity which is already a joint venture partner in the Bawdwin mine and whose links with a military-aligned conglomerate have raised alarm bells.

The Sydney Morning Herald and The Age in March revealed that soon before joining forces with ASX-listed Myanmar Metals, WMM was born out of a company called Asia World, whose leaders have in the past been banned from entering the United States because of suspected drug trafficking and their ties to Myanmar’s senior generals.

Asia World’s founder Lo Hsing Han, a Chinese-Burmese business tycoon and drug lord tagged the “Godfather of Heroin”, was an important backer of the military before his death in 2013, and his son Steven Law, who is still in charge of the company, has also been accused of laundering cash to the Tatmadaw, as the military is known. 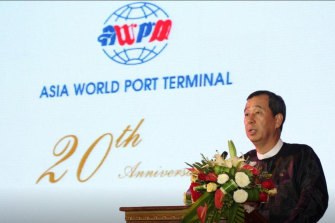 Law has no role with the Bawdwin mine but two of the project’s directors, WMM owners U Muang Kyay and U Than Myint, were Asia World directors.

It is these directors’ previous association with a junta-supporting operation that has triggered activists to ask questions about where money from the sale and the project will be going.

Myanmar Metals chief executive John Lamb did not return calls on Wednesday but said last month the sale represented a return of 75 per cent of its investment in the country, an outcome he described as “a good result considering the circumstances and when compared to outcomes reported from other companies exiting Myanmar positions”.

The company in July knocked back a takeover bid of $US48.57 million ($A66.5 million) from a Chinese conglomerate, Yintai Gold.

A Treasury spokesperson confirmed the AusNCP’s receipt of the complaint against Myanmar Metals on Tuesday. The agency has no power to impose penalties on companies, but publicly announces its findings after assessing complaints.

“The AusNCP will assess the complaint against the OECD guidelines for multinational enterprises in accordance with our complaints procedures,” the Treasury spokesperson said.

Meanwhile, violence is escalating in Myanmar, particularly in remote corners of the country, and it appears set to intensify.

The military’s attacks on villages have increased as it confronts resistance from the People’s Defence Force, the armed wing of Myanmar’s National Unity Government, a shadow administration of former members of Suu Kyi’s administration.

Its acting president, Duwa Lashi La, last week called on “all the citizens within entire Myanmar [to] revolt against the rule of the military terrorists”.

Storm over 'Tory scum' jibe as Labour is branded the 'true nasty party' after Keir Starmer refuses to order Angela Rayner to apologise and she...