London: When Scott Morrison stood in a Cornwall churchyard a few days ago and said he was prepared to wait for the right trade deal with Britain rather than a rushed one, he wasn’t bluffing.

Australia has wanted the new agreement but, unlike Britain, has been in no screaming hurry for it. And, unlike Boris Johnson, the Australian Prime Minister faces no domestic political imperative to seal the deal. 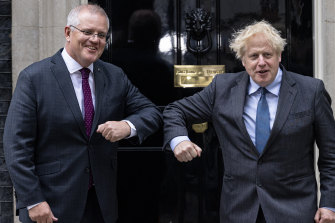 Brexit has forced the United Kingdom to look beyond its own horizons but the coronavirus pandemic has turned Australia inwards. The so-called “quiet Australians” who propelled Morrison to an unlikely election victory in 2019 aren’t exactly focussed on international trade right now.

And while the new economic pact will be helpful to some Australian business and workers, it won’t make a huge difference overall against the backdrop of a strong post-recession economy and established export markets in Asia.

Morrison could have happily left Downing Street on Tuesday morning without signing an in-principle agreement and asked for more weeks or months to continue negotiations over tricky issues like agricultural access and work visas.

That, however, would have been a disaster for Johnson. The British Prime Minister has been hungry for a resolution because striking his first post-Brexit trade deal helps him argue that leaving the European Union has indeed given the UK the freedom to seek its own deals on its own terms.

It doesn’t matter that the overall gains are small: Whitehall officials have predicted a deal with Australia might lift GDP in the UK by £500 million ($914 million) a year. That would lift the UK’s economy by a grand 0.02 per cent.

But there are other compelling motivations for a deal. It will help smooth the way for Britain to join the 11-nation Trans-Pacific Partnership, and sends a good message to less market-friendly nations that like-minded countries are still committed to open trading.

Johnson knows this, as does his Trade Secretary Liz Truss.

Having the Australian Prime Minister in London and failing to seal a deal would have dented Johnson’s standing among his pro-Brexit support base, and delighted Remainers who have always warned new free trade deals would be harder to negotiate in real life than to promise during a referendum.

No deal this week would have also emboldened a small but influential band of protectionists within the Conservative Party. The most remarkable aspect of this is that one of the people who held the biggest concerns about the impact of an Australian free trade deal on British farmers was Cabinet Office Minister Michael Gove.

Gove was one of the biggest cheerleaders for Brexit. He and others from the Vote Leave campaign talked a big game on how, unleashed from the shackles of Brussels, Britain would be able to forge a suite of free trade deals around the globe but when the time came to embrace free trade he bottled it. Those who know Gove well say such shape-shifting is not out of character.

Morrison was right to essentially tell business leaders at a function in London on Monday that if the UK couldn’t do business with Australia – one of its oldest friends and allies – who could?

In the end, Johnson agreed and pen was put to paper.