A truck driver whose inattention on a road in country Victoria caused a crash that killed a primary school teacher and her son, and seriously injured another boy, has been jailed for two years and seven months and could be released early next year.

Instead of watching an unfamiliar road, Michael Knowler was looking at the GPS on his mobile phone as his prime mover approached an intersection in Kingston, north of Ballarat, on December 29, 2019, even though he knew a crossroads was ahead. 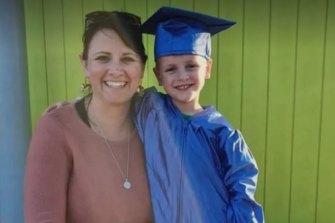 Jess West and son Deighton were killed in a road crash.

The distraction meant Knowler was unable to stop his truck at a give-way sign, and it crashed into a car driven by Anthony West, who with wife Jess and sons Deighton and Oakley were travelling to visit family.

Ms West, 37, and five-year-old Deighton were killed instantly as their car flipped several times, and Oakley, then aged nine, suffered a brain injury, and fractures to his neck and hip. Mr West suffered minor injuries and told court it was only a murmur from Oakley that made him not want to die in the wreckage.

Ms West’s parents, Ken and Christine Shearer, said the truckie had done a “terrible thing” and criticised his sentence as “totally inadequate”. 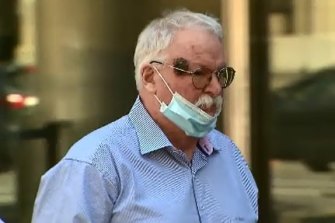 “I think it’s terrible … 14 months and this man can be out April next year is just devastating,” Mr Shearer said.

“It just adds more weight to our troubles.”

Ms Shearer said she still woke every day thinking about her daughter and grandson, and that aside from watching Oakley’s encouraging recovery, the holiday period would never be the same.

“Every Christmas is an ordeal now, there’s not a lot to look forward to,” she said.

Knowler was a Perth-based driver and on a day off to visit a friend when he passed a sign alerting him to an intersection ahead. But at that point he looked down at his phone for directions to Daylesford.

He conceded to police he was “probably going too fast” before the intersection and investigators found his brakes were faulty. However, prosecutors argued it was the insufficient attention he paid to an unfamiliar road that made his actions dangerous.

Judge George Georgiou said Knowler was an experienced driver who should have understood the risk he took in diverting his eyes, and that his actions had caused profound loss and grief.

“The consequences of your conduct are nothing short of dire,” he said. 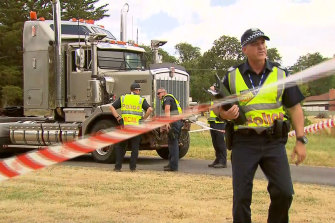 The scene of the fatal crash in 2019. Credit:Nine News

Judge Georgiou accepted the poor design of the intersection reduced his moral culpability, “but the fact remains you were aware there was an intersection ahead” when Knowler looked at his phone while driving at 60km/h in an 80km/h zone.

But the judge acknowledged Knowler co-operated with police, pleaded guilty and accepted responsibility, wrote an apology letter to the West family and was genuinely remorseful. He was diagnosed with post-traumatic stress disorder, and the crash re-triggered his grief at losing one of his sons in a collision years earlier.

Knowler’s prior good character meant his prospects for reform were very good, the judge said, although he faced a possible deportation to his native New Zealand once released.

The judge and the Shearers said road users needed to be aware of the risks associated with using phones.

Mr Shearer said: “We don’t want other families to suffer as we have due to a driver choosing to look at a map on a phone, rather than on the road on which he is driving.”