Hospitality chiefs have warned that new Covid restrictions will ‘decimate’ their trade and lead to job losses in Ireland.

The Irish cabinet has agreed that hospitality venues, cinemas and theatres should have a closing time of 8pm from Monday to deal with the threat from the Covid-19 Omicron variant.

Padraig Cribben, chief executive of the Vintners’ Federation of Ireland (VFI) said pubs would be forced to close their doors for the duration of the restrictions.

He added: ‘I guess the government thinks we should feel grateful for the 8pm closing given Nphet’s demand for a 5pm curfew.

‘The reality is this decision will decimate the trade that was already on its knees.

‘Christmas was the one chance we had to recoup some of the losses amassed earlier in the year but we’re now in a situation where staff will lose their jobs and pubs will shut one week before Christmas as they see little point in opening under these conditions. 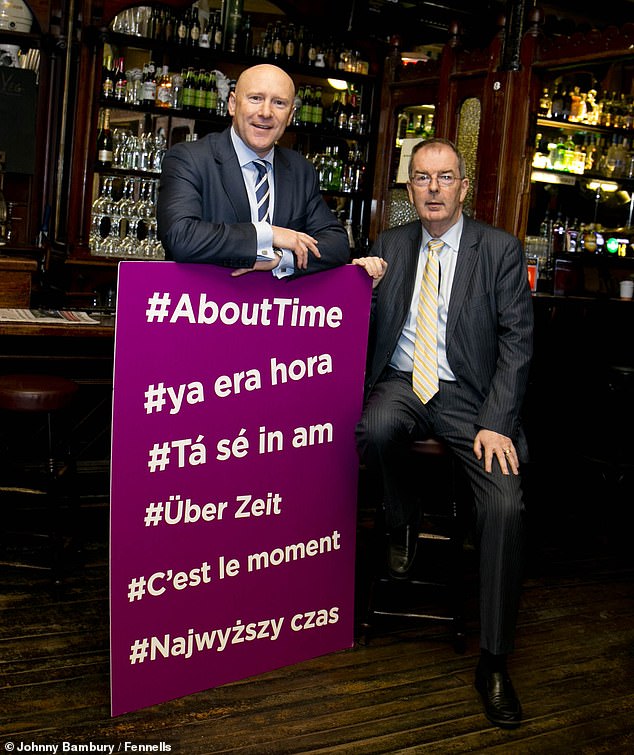 Padraig Cribben (right), chief executive of the Vintners’ Federation of Ireland (VFI) said pubs would be forced to close their doors for the duration of the restrictions

‘While Government may see 8pm as a compromise the reality is that many pubs don’t open until 5pm so three hours trading is unworkable for them.

‘Even for pubs that open earlier the majority of their trade takes place at night time.’

He added: ‘Given the relentless public health message over the past number of weeks to avoid socialising the public had already cancelled bookings in record numbers.

‘There was no need to further restrict trading hours as our customers are safer in regulated pubs that adhere to guidelines instead of house parties and shebeens.

‘Our members are left wondering what the plan is for hospitality.

‘These restrictions are meant to be lifted at the end of January but there is literally no guarantee this will happen.’

Chief executive of the Restaurants Association of Ireland, Adrian Cummins said it was a ‘devastating blow’ to the hospitality industry.

He added: ‘The majority of hospitality businesses rely on income from the Christmas period to see them through the quieter first two months of the year.

‘The loss of income over Christmas is about more than just the festive season, it is about surviving the winter months.

‘It is imperative that financial supports are put in place immediately to offset the impact this will have for businesses and their employees and enable them to survive.

‘As a sector and as a country we need better engagement on what the plan for living with this disease will be going forward.

‘The current last minute reactionary approach is not working, we stand as always, ready able and willing to engage with Government on a plan for the survival and reopening of hospitality.’

The Licensed Vintners Association (LVA) said the Government measures were ‘closure in camouflage’. 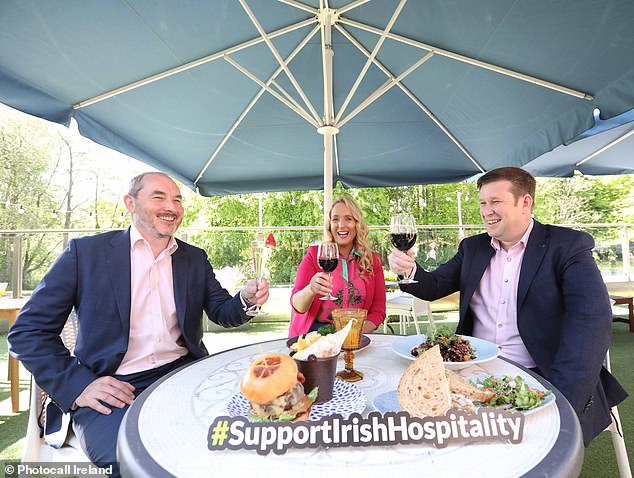 Chief executive of the Restaurants Association of Ireland, Adrian Cummins (right) said it was a ‘devastating blow’ to the hospitality industry

LVA chief executive Donall O’Keeffe said, ‘Obviously we are very disappointed about this decision as it clearly amounts to closure in camouflage.

‘Most of our members will now take the decision to shut their doors as they simply won’t be able to afford operating in these conditions.

‘Many pubs have been expressing the view that they would rather be asked to close than have to accept an arbitrary curfew of 5pm or 8pm.

‘We also seem to be heading towards ongoing, rolling closures of hospitality for as long as the pandemic persists.

‘If that’s going to be the case then the Government should be upfront and tell it straight to the industry.

‘If that’s not what they want then a plan of practical measures such as ventilation standards that will allow our industry to function while Covid-19 and its many variants are still an active part of our lives has to be developed.

‘We can’t stay closed indefinitely, yet that increasingly seems to be the Government’s approach to our sector.’

She said: ‘This is soul destroying for businesses and for our teams and the many communities across the country that rely so heavily on tourism.

‘The financial hit to hotels and guesthouses has been truly stark in recent weeks, and today’s announcement is another severe blow.

‘It is doing untold damage to businesses at a time when they are already struggling, with events cancelled and occupancy levels at near all-time lows.’