Museum bosses are seeking a ‘social justice champion’ who will be paid £35,000 to help ‘decolonise’ its collections.

The successful candidate will address legacies of imperialism and patriarchal power structures, a job advert states.

Paid between £29,000 and £35,0000, the senior curator for decolonial practice will operate at Ipswich Museum in Suffolk, which exhibits worldwide human and natural history. 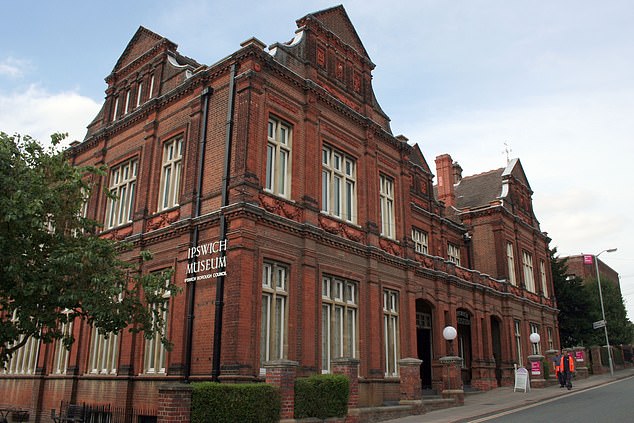 Last year councillors agreed that some displays at the 175-year-old museum were ‘problematic, with certain artefacts of questionable provenance’.

The new role – advertised on the government’s Find a job website – is offered as an ‘exciting opportunity’ for a ‘social justice champion’.

The job description states: ‘You will work with us and our local communities to address the legacies of imperialism, patriarchal power structures and inherent biases in our current displays.

‘You will act as an advocate for tackling the colonial representation of objects, working to make the service more relevant and relatable to audiences.’

The curator will be trusted with a budget of up to £45,000 and will work 37 hours a week on a two-year contract.

One of the key responsibilities is to work with museum colleagues to ‘shape narratives relating to Empire’.

Candidates are expected to have experience working in museums and equality, diversity and inclusion projects.

The role, which is partly funded by a £4.5million grant from the National Heritage Lottery Fund, is open to applicants until May 6.

The council-led Colchester and Ipswich Museums Service revealed plans last June to encourage transparency about the origin and context of its displays.

This includes new research into the history of the artefacts it holds, along with a re-examination of how came to possess them. 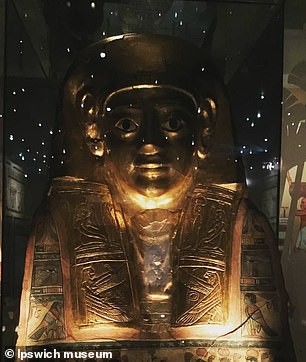 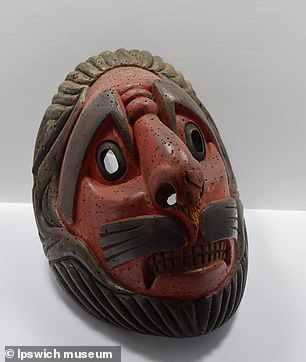 Left, the gold death mask which was made for Roman citizen Titus Flavius Demetrius, who died in Egypt between AD 80-120. The mask is on display at Ipswich Museum. The mask was excavated by archaeologist Flinders Petrie at Hawara in Egypt in 1888. Right, another of the museum’s many artefacts in its collection 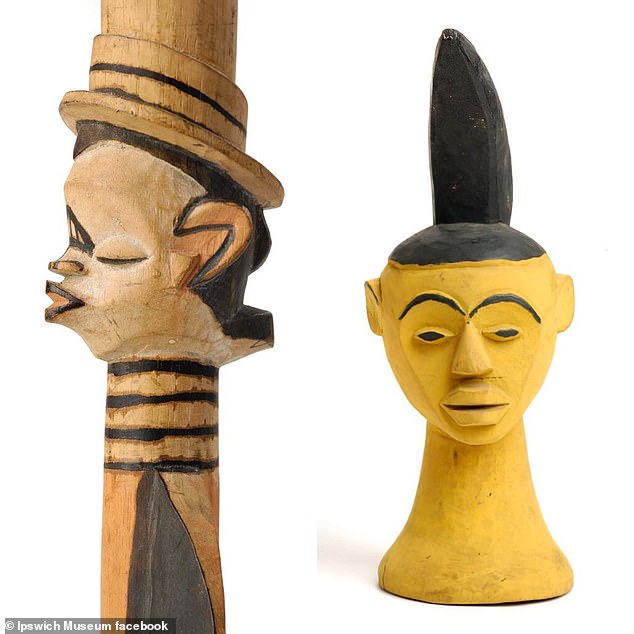 One of the key responsibilities is to work with museum colleagues to ‘shape narratives relating to Empire’. Pictured, artefacts from Nigeria which are on display at Ipswich Museum

A document approved by Colchester and Ipswich Borough Councils stated: ‘The documentation of much of the world cultures collection, collected predominantly in the 19th century, is superficial and needs urgent remedial investigation.

‘Whilst the museum has an array of world objects, its current ethnic visitor profile does not reflect that of the local, diverse demographic.’

Frank Hargrave, Colchester and Ipswich Museums manager, said last year that he hoped for greater transparency and diversity in exhibits.

Mr Hargrave said: ‘It’s not about being unnecessarily provocative, it’s about finding long-term solutions and working with people to find solutions without being tokenistic or overly antagonistic.’ 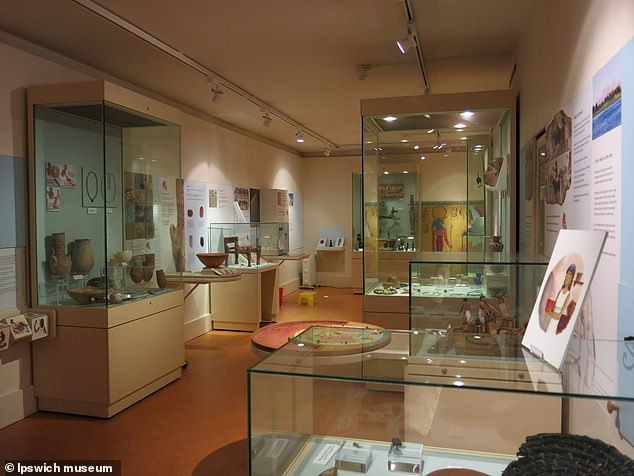 Frank Hargrave, Colchester and Ipswich Museums manager, said last year that he hoped for greater transparency and diversity in exhibits. Pictured, inside the museum

He added it was ‘not about taking stories away or hiding things, very much the opposite.

‘We will be looking at the holdings of human remains and religious artefacts, as well as those acquired by those with imperial agendas of their time such as colonial officers, expedition captains and missionaries.’

On Colchester and Ipswich Museums’ website, a message apologises for some of the ‘historic terminology’ used on its database.

It says: ‘Historic terminology for cataloguing objects and belongings are recorded on this database and some of the language is discriminatory, offensive and upsetting.

‘We keep the historic terminology to allow us to see how people in the past perceived the world around them.

‘We are working towards ensuring voices other than the Museums are reflected in the database.’