London: The Duke of York, is expected to call for a review of his security after intruders were discovered near his residence at Windsor Royal Lodge in the second such incident in a matter of days.

It has emerged a man and a woman were arrested after being found trespassing on the grounds last Sunday, April 25.

The incident comes as police were already facing serious questions after a woman in a taxi talked her way on to the estate after telling security guards she was a friend of Prince Andrew. 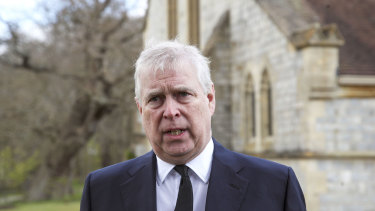 Britain’s Prince Andrew before the Royal Chapel of All Saints at Royal Lodge, Windsor.Credit:AP

It is thought senior officers in charge of security for the Royal Lodge, which is around 7 kilometres miles from the Queen’s residence at Windsor Castle, were already assessing its arrangements following the taxi incident.

However, Dai Davies, the former head of Scotland Yard’s royal security unit, called for a full review into the breaches and for security to be boosted for all senior members of the Royal family.

“There should be a review by someone at my level – and I would be looking for answers,” he said.

”I am concerned there seems to be a drop-off in the level of security.

“These things do need investigating properly and where people have let the side down they should be dealt with. What would the Queen say? She would say get it right and put it right.”

Following the latest intrusion, a man aged 31 and a woman, 29, who is thought to be his girlfriend, were arrested after scaling fences near the Duke’s residence.

The pair were taken to Maidenhead Police Station and have since been bailed pending further inquiries. 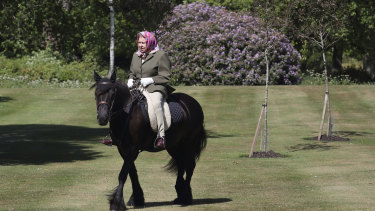 He added: “I am not in favour of private security firms, doing it. It should be a 24/7 professional [force].

“To have unarmed security guards [protecting the estate] seems to my mind nonsensical.”

Both the Duke and Duchess of York currently live at the Royal Lodge, a 30-room Grade II listed building on the southern end of the in Windsor Great Park estate.

Princes Eugenie and Jack Brookbanks lived at the lodge for a spell after the birth of their son, August, last year.

The Queen is also a frequent visitor to see the Duke and is a regular presence across the estate, where she rides and walks her dogs.

The Queen was pictured riding her pony, Balmoral Fern, at Windsor Castle during lockdown

The review into the estate’s security comes as Windsor Castle has become the main residence for the Queen, who has lived there since the beginning of the first lockdown.

As the pandemic eases, she is expected to continue to spend the majority of her time at Windsor, where Prince Philip is buried and which she views as more of a home compared to “the office” of Buckingham Palace.

Buckingham Palace and the Prince Andrew’s office both declined to comment on the breaches, saying they were matters for the police.