The brother of a man who killed six people in a car crash in 2006 has been refused bail after allegedly crashing his car into a man unloading newspapers in the same regional town, causing horrific injuries.

Darren George Towle, 46, faced Mildura Magistrates Court on Monday charged with dangerous driving causing serious injury and committing an indictable offence while on bail after crashing into a 72-year-old pedestrian at Mildura on Friday morning. 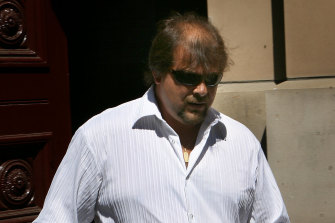 The court heard the victim’s injuries were so severe, his leg has since been amputated.

Mr Towle’s older brother Thomas Towle was jailed for 10 years after driving a car into a group of teenagers, killing six, on February 18, 2006. He left his two young children inside the vehicle while he fled on foot.

During that court case, a judge was told Thomas Towle had been visiting his brother, who lived less than two kilometres from the party house where the teenagers had been.

At the time, the court heard Darren Towle had warned his brother that children had been spotted on the road and to be careful.

On Monday, the court heard Darren Towle- who is now facing his own serious driving charge – was behind the wheel of a red Holden Commodore in wet weather when witnesses say he began swerving in and out of the bike lane, before hitting a man who was unloading newspapers, crushing him between the two cars.

Leading Senior Constable Nelson, from the major collision squad, said Mr Towle appeared drug-affected after the crash, later falling asleep and struggling to stay awake at the hospital. A drug test was pending.

He said body-worn camera footage from the scene showed Mr Towle speaking to his mother, where he said: “I just dozed off”. The accused has been held in custody since.

Mr Towle wiped his eyes and held his head in his hands while his mother, Jill Wilson, gave evidence. She said her son should be released on bail to take care of her as she struggled to walk and lived with diabetes.

She said her son called her from the scene to say he’d had an accident.

“I did not hear much because I was too upset. He said he lost control of the car, dozed off, and he was crying,” she told the court.

In opposing bail, Leading Senior Constable Nelson said he believed Mr Towle would pose a risk to the community if released.

Mr Towle’s lawyer, Jennaye Dodd, argued her client was an unofficial carer for his mother, who suffers osteoporosis, and should be bailed with strict conditions not to drive or consume drugs and alcohol.

But magistrate Michael Coghlan refused bail and ordered the 46-year-old to return to court in February for a committal mention.

He said if a drug test came back positive it was likely the charge of dangerous driving would be upgraded to negligent driving, which carries a much longer jail term.

Mr Coghlan said Mr Towle was already on appeal bail at the time of the crash while he fought a one-year jail sentence imposed late last year for recklessly causing injury and false imprisonment. That matter, the court heard, was due to return to the County Court in 10 days time.

Our Breaking News Alert will notify you of significant breaking news when it happens. Get it here.