Hurricane Douglas has continued to maintain its intensity after initial predictions the storm would calm down before it reached Hawaii. Hurricane warnings have been issued in the US island state, and locals are preparing their homes to protect them from damage.

Hawaii has suffered from only two landfalling hurricanes since 1959 – so the news that Douglas is due to hit shores in obviously worrying for the local population.

Hurricane Douglas is a Category 1 storm with sustained winds at 90 mph, downgraded from a Category 3 earlier this week.

The storm is currently 240 miles east of Kahului, Hawaii, and is moving west-northwest at 16 mph.

A hurricane warning is in effect for the islands of Kauai and Niihau, Maui, as well as Oahu, home to the state’s largest city, Honolulu, with the storm beginning to impact the island as early as the late morning. 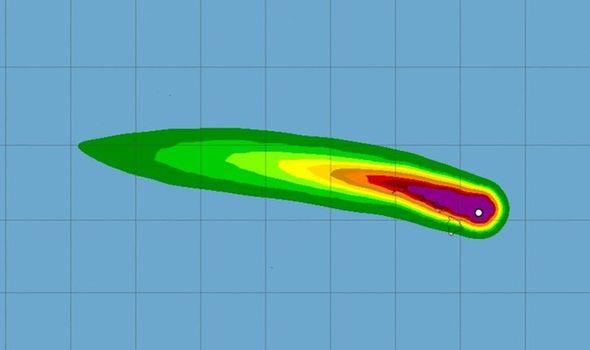 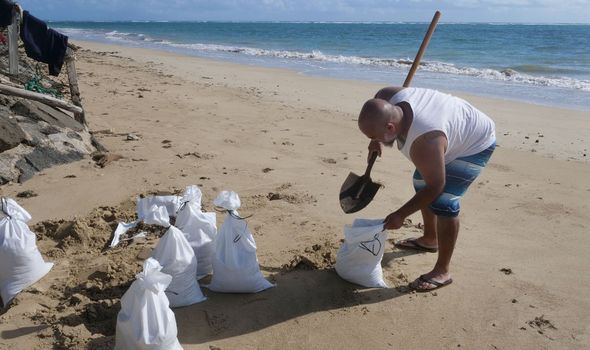 Hurricane Douglas weakened Saturday to a Category 1 hurricane as it approached Hawaii, but officials warned people should not be lulled into complacency.

Maps show the storm’s trajectory widening as it approaches the islands, and is predicted to hit Hawaii directly or to just skim past it.

Douglas will slowly weaken as it tracks west-northwest, but it is forecast to remain a hurricane as it makes its closest approach to Hawaii.

Strong and potentially damaging winds are expected in Hawaii. Hurricane conditions, which are winds 74mph or greater, are possible in parts of Maui, Oahu and Kauai through Sunday night. 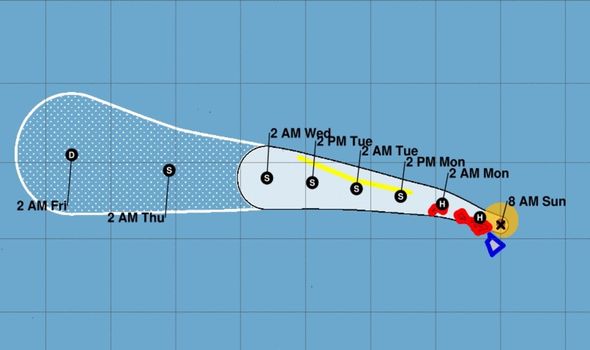 The exact track of Douglas will determine how much of the island chain is impacted by either tropical storm or hurricane-force winds.

A water level rise of up to three feet above normal tide levels is possible in exposed areas.

The NHC said: “The Hawaiian Islands should monitor the progress of Douglas.

“There is an increasing chance that strong winds, dangerous surf, and heavy rainfall could affect portions of the state beginning Saturday night or Sunday.”

Hawaii covers 6,423 square miles of land divided up among six main islands, all in the world’s largest ocean basin.

Hawaii covers 6,423 square miles of land divided up among six main islands, making the chance of a direct landfall even less likely. 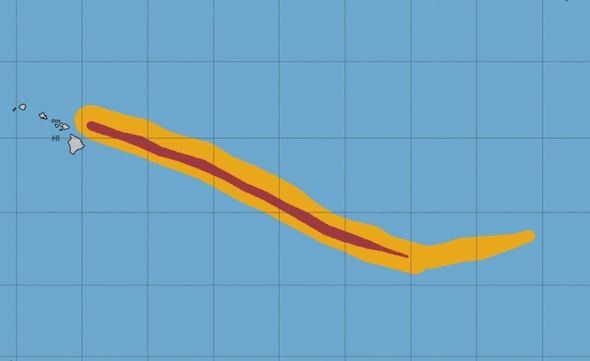 Florida, by comparison, is a significantly easier target for hurricanes to strike as it covers more than 50,000 square miles.

The storm begins what is already a late-starting season in the Pacific as well as the Atlantic.

The eastern Pacific has been slower for storm development than in previous years.

The NHC said: “During the period of reliable records, this is the 4th latest date in which the first hurricane of the season has formed.”