Hours before actor Alec Baldwin fatally shot a cinematographer on the New Mexico set of “Rust” with a prop gun, a half-dozen camera crew workers walked off the set to protest working conditions.

The camera operators and their assistants were frustrated by the conditions surrounding the low-budget film, including complaints of long hours and pay, according to three people familiar with the matter who were not authorised to comment. 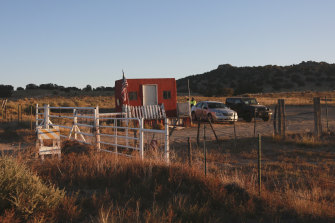 The entrance to a film set where police say actor Alec Baldwin fired a prop gun, killing a cinematographer, is seen outside Santa Fe, New Mexico.Credit:AP

The camera crew showed up for work as expected at 6.30am on Thursday and began gathering up their gear and personal belongings to leave, one knowledgeable crew member told the Los Angeles Times.

Industrial trouble had been brewing for days on the dusty set at the Bonanza Creek Ranch near Santa Fe.

But after filming began, the crews were told they instead would be required to make the 50-mile (80 km) drive from Albuquerque each day, rather than stay overnight in nearby Santa Fe. 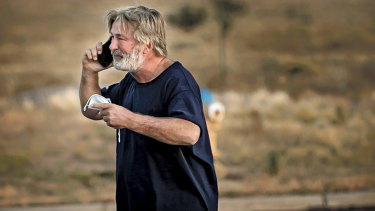 Alec Baldwin speaks on the phone in the parking lot outside the Santa Fe County Sheriff’s Office in Santa Fe, New Mexico, after he was questioned about a shooting on the set of the film “Rust” on the outskirts of Santa Fe.Credit:AP

The cinematographer who was accidentally killed, Halyna Hutchins, had been advocating for safer conditions for her team, said one crew member who was on the set.

As the camera crew — members of the International Alliance of Theatrical Stage Employees — spent about an hour assembling their gear at the Bonanza Creek Ranch, several nonunion crew members showed up to replace them, the knowledgeable person said.

A member of the producer staff then ordered the union members to leave the set. She said if they didn’t leave, the producers would call security to remove them.

“Corners were being cut — and they brought in nonunion people so they could continue to shooting,” the knowledgeable person said. 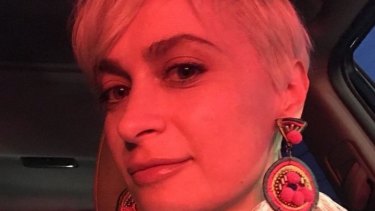 There were two misfires on the prop gun and one the previous week, the person said, adding “there was a serious lack of safety meetings on this set”.

A representative for the production company did not immediately comment.

“The entire cast and crew has been absolutely devastated by today’s tragedy, and we send our deepest condolences to Halyna’s family and loved ones,” the spokesperson for Rust Movie Productions said in a statement on Thursday.

The shooting occurred about six hours after the union camera crew left.

Baldwin, the film’s star who also served as a producer on the film, was apparently rehearsing a scene outside the church of the Bonzana Creek Ranch set, according to two knowledgeable people.

The scene involved a gun fight that began in the church, and then Baldwin’s character was supposed to back out of the church, according to production notes obtained by the Los Angeles Times. It was the 12th day of a 21-day shoot.

The Santa Fe County Sheriff’s Office said deputies were dispatched to the Bonanza Creek Ranch movie set, where filming was underway for the western Rust, after calls to emergency services at 1.50pm Baldwin was starring in the movie in addition to serving as one of the producers.

No charges have been filed, but the Sheriff’s Office said that “witnesses continue to be interviewed by detectives”.

Baldwin said Friday he’s “fully cooperating with the police investigation” into the incident.

“There are no words to convey my shock and sadness regarding the tragic accident that took the life of Halyna Hutchins, a wife, mother and deeply admired colleague of ours,” Baldwin wrote Friday in a series of tweets.

Production has been halted on the low-budget movie, which began filming this month.

In an email to its members, Local 44 of the International Alliance of Theatrical Stage Employees, a union that represents prop makers, said the shot that killed Hutchins and injured director Joel Souza on Thursday was “a live single round”.

“As many of us have already heard, there was an accidental weapons discharge on a production titled Rust being filmed in New Mexico,” said the North Hollywood-based local.

“A live single round was accidentally fired on set by the principal actor, hitting both the Director of Photography, Local 600 member Halyna Hutchins, and Director Joel Souza. Both were rushed to the hospital,” the email said.

A source close to the L.A. Times said the union does not know what projectile was in the gun and clarified that “live” is an industry term that refers to a gun being loaded with some material such as a blank ready for filming.

Bonanza Creek Ranch has been a popular filming location for more than 60 years. The first movie to film there was The Man From Laramie, starring Jimmy Stewart. It also was the set for the classic Blazing Saddles, The Ballad of Buster Scruggs and the popular TV show Longmire.