A graphic image captured moments after two police officers were shot while sitting in a parked patrol car has emerged showing the shocking injuries sustained by one of the cops.

The victims, a 31-year old mother of a six-year-old son and a 24-year-old male, are both in a critical condition but expected to survive, a spokeswoman for Los Angeles Sheriff's Department told The Sun. 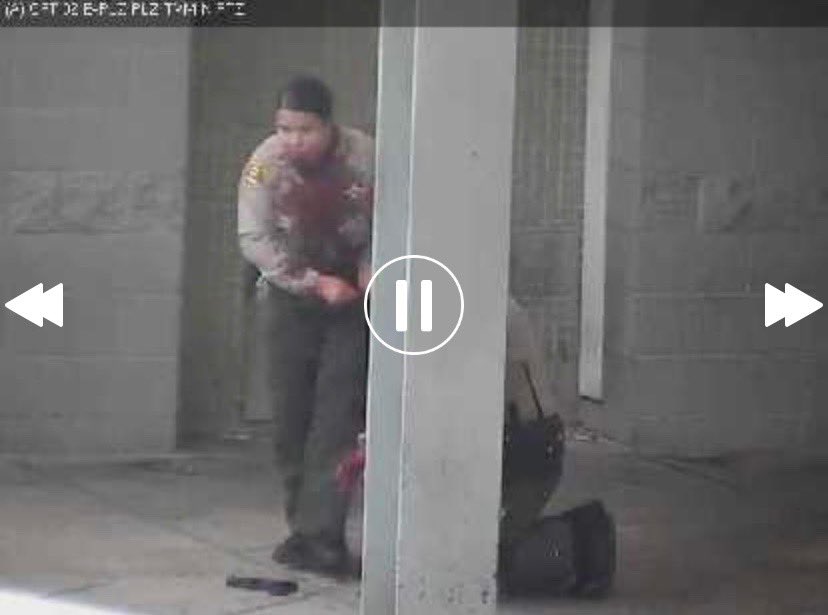 The deputies, who work for the LA Transit Services Bureau, were ambushed by an unknown gunman who opened fire on them through the window of their patrol car in Los Angeles, California, around 7pm on Saturday.

The families of the two wounded officers approved the release of the disturbing image, which shows a bloodied female deputy standing next to a pillar after being shot through the jaw, according to FOXLA correspondent Bill Melugin in a post on Twitter.

The male deputy can be seen kneeling down behind a column holding out a blood-soaked hand with a gun on the ground in front of them.

Grainy CCTV footage of the attack shows the shooter fire a weapon through the passenger side of the patrol vehicle, leaving both the male and female deputy with critical head wounds.

The suspect got off a bus at the station and then carried out the attack before fleeing on foot, authorities said.

“We at the LASD would like to offer our sincerest appreciation for the overwhelming support being offered from all over the Nation," a spokesperson for the sheriff's department said in a statement yesterday.

"We also wish to thank the LA County Board of Supervisors for sponsoring the $100K reward for the arrest and conviction of this coward.

"At this point we have a very very generic description of a dark-skinned male and that came from one of the victims," Captain Kent Wegener told news conference.

An LASD spokeswoman told The Sun that a suspect had not been identified and no further information was available at this time.

The sheriff's department also cautioned on Twitter late Sunday that social media posts of the alleged shooter had identified the wrong person.

“Currently, there is a social media post that is being circulated which identifies a male out of Los Angeles as the suspect responsible for the ambush of our 2 deputies yesterday,” the post said.

“This is ERRONEOUS information and there are no named or wanted suspects at this time.”

Sheriff Alex Villanueva said the deputies injured in the attack were both sworn into the department just 14 months ago.

The victims initiated radio contact after they were shot and were rushed to hospital with the assistance of other deputies, he said.

"This is just a somber reminder that this is a dangerous job, and actions and words have consequences,” Villanueva added.

“Our job does not get any easier because people do not like law enforcement.

FBI Los Angeles has offered resources and "stands ready to assist" in response to the attack.

Local law enforcement officers took to social media to express their anger and disgust over the shooting.

“I’m sick to my stomach. The deputies are in my prayers. Blessed are the peacemakers, for they shall be called the children of God.”

Avalanche, a blockchain offering scalability to the world of decentralized finance took its mainnet live on Sept. 21. “From Snowflake to Avalanche, the decentralized platform...